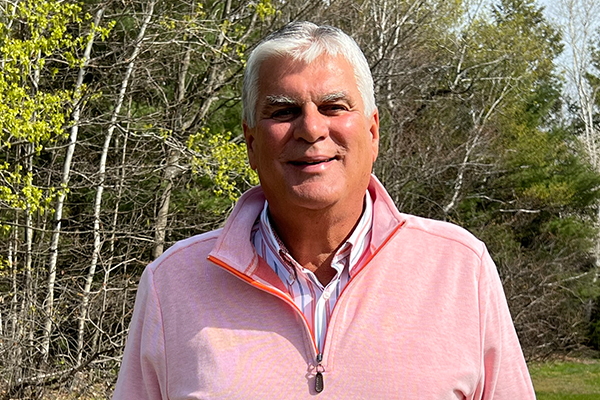 Alcoholism and drug treatment programs have been Rick DiStefano’s career focus and passion since he was a young man. Immediately following graduation from Peru Central School, he enlisted in the Navy where he trained as a hospital corpsman. He had an interest in behavioral health, so when there was an opening in the psychiatric residency program, he jumped at the chance to serve. “The Navy was short on physicians at that time,” DiStefano recalled, “I basically ran a psychiatric facility in Rhode Island.”

While he was certified to perform complicated procedures in the Navy — including minor surgery — when DiStefano left the service, he lacked the credentials needed to continue working at the same level. He briefly considered medical school before choosing the civil service route. He started with the Clinton County Alcoholism Program and worked his way up to become its director. He then moved into private industry through Conifer Park and its parent company, MediPlex Liberty Management Company. During his 17 years with Conifer, he rose to the executive level and built his career running residential treatment facilities in communities across the northeast.

Eager for a challenge, DiStefano and business partner Jack Duffy, started Valley Vista, a residential
treatment facility in Vermont in 2003. The duo opened an 80-bed facility in Bradford, Vermont and later added 22 more beds at a second location in Vergennes.

When retirement called DiStefano in 2017, he and Duffy sold Valley Vista but the transition to new
ownership did not go well. Two years later he received an urgent call from the Governor’s office. “The facility was in danger of closing and they begged me to come back and help,” he explained. While DiStefano was conflicted, he knew Valley Vista was part of his legacy and he could not allow it to fail. “We bought the program back and took it over in May of 2020. It was a terrible time,” he reflected, “Many of the staff left before and during the pandemic. We went through a difficult rebuilding process.” Today, Valley Vista is back, and all 99 beds are operable and staffed.

DiStefano divides his time between his homes in Jupiter, Florida and Plattsburgh and is looking forward to strengthening his ties in the North Country as he slowly moves closer to his second attempt at retirement. He recently took time out of his busy schedule to talk with Strictly Business.

SB: How did you get into mental health and recovery services?
RD: When I began working in this field, most of the people in the industry were recovering alcoholics
or addicts. I did not come from that background, but I did have an early experience that impacted me. While I was in Hospital Corpsman School, I had a little too much to drink at a pizza parlor the night before a big exam. I learned that you really don’t study well when you are drinking. I ended up failing the exam and, as a result, I was at risk of flunking out. It was a real wake up call for me. A counselor told me if I failed, I would still be okay. He assured me that I would not get kicked out of the Navy, but instead of the path I was on, I would probably be scrubbing decks instead. Right then and there I decided I would not drink again during the rest of my time in service. I graduated number one in my class and got the first pick of where to go afterward.

SB: Who was your most influential mentor?
RD: The MediPlex company was run by Gay and Bill Hartigan, a husband-and-wife team. Gay gave me many opportunities, some of which I wasn’t even sure I was ready for. She helped me develop into the manager and leader that I was in those positions. Without Gay and Bill, I would not have been prepared to run a company like Valley Vista.

SB: Are there misconceptions about people in recovery that the broader community should know?
RD: Most people seem to think that addicts and alcoholics are found more often among lower socio-economic status folks. I have treated people from all walks of life. Physicians and attorneys may have more of an ability to hide it than others, but addiction is found across the board. It is an equal opportunity disease.

SB: What important lessons did you learn early in your career?
RD: As a person who never completed a college degree, I was hiring physicians and many others who had earned advanced degrees. When that started to feel intimidating to me, I gave it a lot of thought. I made the decision early on to always try to hire people smarter than me, who could do the job better than I could do it. I think this is good practice for anyone in a leadership position.

SB: Tell us about your approach to management and leadership?
RD: I have always surrounded myself with really good, bright people. A great deal of my success is due to what they gave, and the time they spent helping me be successful. It is important to hire good people and then reward them. Spend as much time with them as you can and involve them in making important decisions. If you hire the right ones, they will make you look good.

SB: What does success look like to you?
RD: I can’t go anywhere in the area without bumping into someone I either treated or helped one of
their family members access treatment. When you help one person, you also help their family, employer and entire community. To play even a small role in making someone’s life better is one of
the most wonderful feelings.

SB: What is something no one would guess about you?
RD: My wife and I were married at a rodeo and I competed in professional rodeos for a number of years.

SB: What is next for you?
RD: I have been able to slow down recently, with really good people running things at Valley Vista. Now I want to look for ways to give back to my community here. I’d like to become more a part of Clinton County at this phase of my life and discover how I can give back to the place that has given me a lot over the years.

SB: What do you believe the North Country community should do today to ensure a prosperous future?
RD: First have to truly understand how bad the problems of addiction are. Once we know what resources we will need to battle the issue, we need to respond. We are seeing serious amounts of heroin, fentanyl and people putting things in their bodies without knowing what they are or where they came from. I don’t see any signs of this getting better anytime soon. The pandemic has certainly made it more challenging, adding to the problem that was already there.