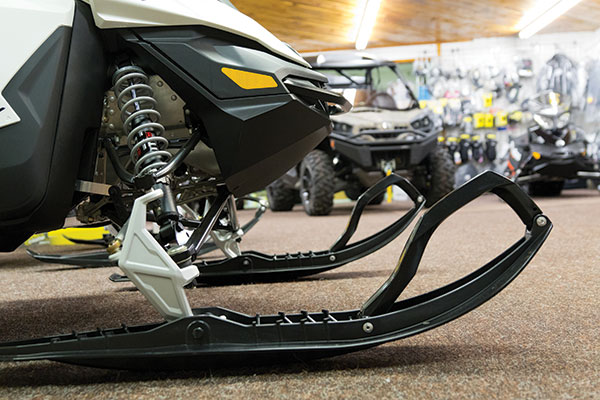 Roberts Sports Center has been doing business in the North Country since 1964. To trace the business’s history is to climb the family tree. Donald Roberts and his wife Catherine Roberts started the sports machine dealership in 1964 in a garage near their house. In that house they raised four boys: Donnie, Lloyd, Wayne and Kyle. I talked with Kyle Roberts and his wife Nancy Roberts at the Saranac store they now own and operate as Roberts Sports LLC and learned about how they got there.

Roberts of Silver Lake Road
Kyle’s dad, Donald Roberts, was always a tinkerer. He enjoyed the outdoors, and when the snow machine called “Ski-Doo” hit the market in the early ’60s, the elder Roberts was already familiar with it and later became the oldest Ski-Doo dealer in the country. Part of the fuel that the Roberts Sports business runs on is a genuine passion for what they do, and that’s part of the legacy Kyle and Nancy Roberts continue. Being an owner-operated business, they are not looking for “turn and burn” sales. Instead, their goal at Roberts Sports is to build and retain customers. In the process, they have established themselves as an industry resource for the community. Kyle Roberts has the mechanical know-how and Nancy Roberts is in charge of “public relations.” “She’s got people who stop in just to collect their hugs from Nancy,” said Roberts.

Donald and Catherine Roberts established the flagship shop in Saranac in 1964, and in the mid- ’80s opened the Malone shop. Kyle Roberts remembers it vividly. It was summer, and the family was working their booth at the Franklin County Fair when they got word of a fire. “Donnie (Roberts, Kyle’s brother) was working on an engine and it sparked and caught. The impact blew him back and knocked him out. He came to and realized the building was engulfed and he was able to get out,” said Kyle Roberts. Thankfully, no one was hurt in the blaze, but the building was a total loss. The Roberts were able to rebuild and be operational before the start of snow season. But in the meantime they were in search of a store front and came into the Malone location. That store is still in operation today and while Catherine Roberts remains the “Matriarch of Malone,” the store is managed by Wayne and his wife Diane Roberts, and they operate inde- pendently from the Saranac location.

The Importance Of Mechanics and Tootsie Rolls
Kyle Roberts refers to himself as a “shop baby,” having grown up quite literally in the business he and his wife now own. He has no regrets. He didn’t want to play on any of the local sports teams; he wanted to work on sleds. The work ethic that his diligence instilled led him to the ownership of the store he apprenticed in as a boy, and has allowed him to accumulate the kind of knowledge that only hands- on experience can give, and Kyle Roberts has accumulated decades worth. “If there is something wrong with your machine, I want to fix it, and I can. We want to make sure everybody is happy,” he said.

Roberts is proud of his expertise in mechanics. “I’m a mechanic first—before I’m a salesman. I came up through the shop,” he said. It enables him to relate to the customers as a machine operator. That type of advice is something the customers appreciate; whether they’re newbies to the sport or seasoned sled dogs, Roberts is happy to help. He remains among only a handful of mechanics in the country—and the only in the area—to be a certified Master Service Technician in Ski-Doo, Sea-Doo, Can-Am ATV, Can-Am Side by Side and Can-Am Spyders. He continues to go to technician training to maintain his certifications—not to collect paper, but to ensure that he’s giving his customers the best service on their investments.

It seems unfathomable, but in addition to working in the shop full time, for 25 years Roberts worked full time as a corrections officer. Although he retired from his corrections work two years ago, he had a bit of a bewildered look on his face when he said, “I don’t know how I did it…really.” And while some might not consider that such a labor-intensive choice of retirement is really retiring at all, Roberts is happy to devote his time to something he loves, with the person he loves. He and Nancy Roberts work side by side every day. She has been helping with the automated systems and the books for years now; she came on to help her in-laws. Now, the two of them are only too happy to provide their customers with a level of service and attention that store visitors have come to expect from the Roberts name…along with a Tootsie Roll, of course!

For at least the past 20-plus years, there has been a well-stocked dish of Tootsie Rolls on the counter by the register at Roberts. I asked Kyle Roberts about the sweets and he said, “I really don’t know. I think it’s something that my Mom started, but everybody knows about our Tootsie Rolls. We don’t run out. And if you don’t like Tootsie Rolls, have a Tootsie Pop instead.”

With Kyle and Nancy Roberts at the helm there have been some changes to the operation. They continue to offer the Ski-Doo snowmobiles on which Roberts Sports was founded, along with Can-Am ATVs and Side by Sides. They also deal with Sweetwater pontoon boats and Yamaha outboards. “The sale of those has been great for years,” he said. “With the low snow condition I was selling pontoon boats in February.” On the other hand, there are other circumstances and conditions that simply need to be folded in as part in parcel of the business. For example, the contractual agreement that Bombardier (the maker of the Ski-Doo, Sea-Doo, and Can-Am brands) has with all their dealers prohibits them from selling any BRP (Bombardier Recreational Products) merchandise to Canadian residents. “I feel bad when the Canadians come here and want to buy, but I can’t sell it to them…it could cost me our BRP dealership,” said Roberts.

Kyle and Nancy Roberts sat in the office and talked about what the future holds. They are dedicated to the area and the relationships and family they have here.
As for what the future holds…well, that depends on who you ask. It does seem to be unanimous that in the next decade or so the Roberts look forward to serving their customers and earning new ones. When they retire they’ll plan on spending more time with their kids and grandchildren and just enjoying each other; which is clearly apparent—they already do.