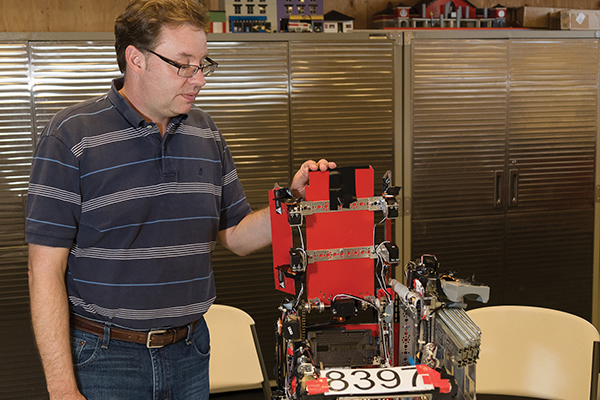 Stop by the 4-H space at the Champlain Valley Transportation Museum on New York Road in Plattsburgh, NY, where members of the Adirondack Engineers Club hang out and you will be amazed, impressed and surprised all at the same time. This rockin’ robotics club, made up of students from private and public schools as well as home schools, has got it going on for a whole lot of learning mixed in with a good dose of fun.

The students’ enthusiasm was contagious as they described their experience at the World Robotics Championship, known as the FIRST Tech Challenge, held in Detroit, Michigan in April. FIRST Tech Challenge was created in 2005 for students from around the world in grades 7-12 to design, program and build robots for competition. The event is one of the largest STEM (Science-Technology-Engineering-Math) competitions in the world.

After untold hours of hard work, the Adirondack Engineers’, FTC Team Beta 8397, won the prestigious Think Award at the East Super Regional competition in Scranton, Pennsylvania in March and was on its way to Detroit – not an easy feat as only 127 teams out of approximately 6,000 from all over the world qualified for the event. Team members were a sight to behold in their matching suit coats with bright orange beta fish on a blue background and multicolored fish hats. They even brought a mascot to the competition – club member Anna Plaza in a life size shark suit.

The students explained the intense five-day competition that goes from 8 a.m. to 6 p.m. every day in front of 40,000 spectators and another 10 ,000 watching live on Twitch.tv and NASA TV. Nicholas Dorrance said, “It was the first time we made it out of Regionals. We were nervous and excited all at the same time. It’s the top level of the competition. Every team competing there is extremely good.”

Bradley Neureuther explained that four random teams compete in a match. During the first 30 seconds of the two-and-a-half-minute match, also known as the autonomous period, the drivers must not touch the controllers as the robots drive themselves. Next is the teleop period and the match is completely driver-con- trolled from then on. The final 30 seconds is called the end game. A team you are competing against in the beginning of the competition could become your alliance team at some point.

Strategy is all about moving your robot autonomously, quickly and reliably scoring points by using it to move designated objects into predetermined positions. This year’s competition was called Relic Recovery resembling an Indiana Jones theme using glyphs, jewel sets, relic recovery, completed columns, and cypher patterns all of which scored points for the team. Balancing stones also earned points but if you did not follow the rules, which were many, you could score points for your opponent.

According to Justin Bokus, the biggest technical difficulty they had to overcome was static electricity which can shut down your robot. “Other teams were having the same problems and working together with them we figured the solution out pretty quickly,” Liam Sayward took care of repairs to the robot getting it ready for the next match. That part was critical as something always seemed to break or unexpected problems came into play.

The team was judged not only on the performance of its robot but on the quality of the engineering notebook the students are required to maintain throughout the year. Grace Sayward, a high school junior, worked hard at keeping the notebook organized and complete with resumes of each team member and mentor, robot design, computer code, fundraising events, and other required materials. After oral presentations, the judges were allowed to ask the team questions. Team Beta did exceptionally well in that segment of the competition.

The most important part of the whole competition was called Gracious Professionalism which was followed by all teams. Team Beta all agreed it was all about teams helping each other, whether through shared equipment or technical help.

The consensus of all the team members was that competition is all about learning and having fun. When asked what the best part of the trip was they agreed the feeling that they did their best. At the end of five long days of competition Team Beta placed 30th in overall offensive points and was one of only six teams to be nominated for the Control Award, which means having the best control of your robot. For their first trip to a World Championship that’s a great accomplishment and something to brag about.

At the end of our interview students were asked if there was anything they wanted to relay to SB readers. Without hesitation Tanner Lamarche spoke up. “We couldn’t do it with- out Brian’s leadership.” They all agreed Brian Neureuther is the greatest go-to guy they could ask for, leading Team Beta along with the other adult mentors who are there for them too, making sure the team has whatever is needs for parts, equipment and conducting fund raisers. For further information regarding the Adirondack Engineers you can contact Dr. Neureuther at neureubd (at) yahoo.com.