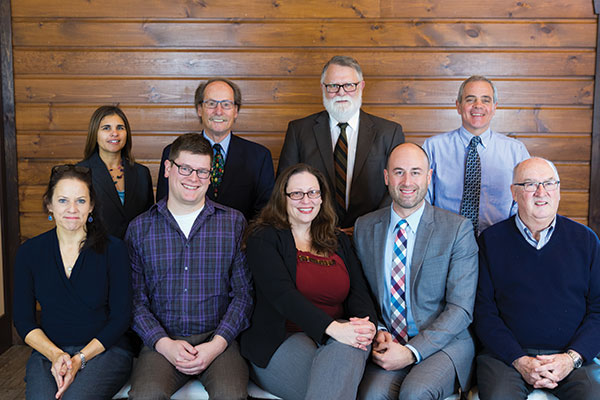 The mood was optimistic at Table Two as the 27th Annual Strictly Business Forum opened for business in early December. A more diverse group would be hard to find at any gathering, but however varied their trades, from the non-profit sector to the arts to financial services, the mood was decidedly upbeat. The group was asked to reflect on the past year and John Bernardi, Executive Director and CEO of United Way of the Adirondack Region and Reg Carter, Executive Director of CITEC Business Solutions, led the discussion off from the perspective of the non-profit sector. “Our non-profit and health and human service net- work in the region is very strong. There is a tremendous spirit of cooperation, partnership, and collaboration in the region that is working hard to maintain and even improve the quality of life in the area,” said Bernardi. Carter explained that CITEC, a non-profit consulting and economic development organization, had spent the year working with 60-plus companies in the North Country region and reflected that overall the businesses had a good year. “There is an aware- ness that you can’t stand still, you can’t be static. People are working very hard to expand their market positions, to increase efficiency and provide more value to their customers,” said Carter.

“The Strand Center for the Arts is now recognized as being a piece of the fabric that is turn- ing Plattsburgh into the place we always knew it could be,” said Strand Executive Director Joshua Kretser. He credits the community and collaboration with area businesses and organizations for enabling the Strand to achieve its goals, from partnering with the United Way to create scholarships for disadvantaged youth to press from WPTZ, and financial support from many local organizations.

Paul Sands, Trustee for the UVM Health Network, gave the year mixed reviews. “The move to the network has been very good. Maybe not in every component, but we’re stronger as part of a system, and there’s been some good stabilization over the past few months.” A major change in health care is the move away from fee-for-service payments to doctors and hospitals to incentive-based payments with rewards for keeping patients (and communities) healthy. “It’s an entirely different way of looking at health care. It’s the right way to look at it,” added Sands.

Alex Forster, COO – Registered Representative of CFA Insurance, said his company strives to allow individuals and businesses to understand that they have opportunities with regard to its earnings, and its efforts at education are paying off. “People tell us, ‘I looked into these programs that can help supplement our budget and it has worked. I feel much more secure as I approach retirement,’” said Forster.

Christina Ubl, Certified Financial PlannerTM and Advisor/Partner at Clute Wealth Management, discussed how the past year had been spent preparing for new regulations under the “Fiduciary Rule” set forth by the U.S. Department of Labor and scheduled to take effect in April of 2017. The sweeping legislation is aimed at ensuring brokers put clients’ best interests first while eliminating possible conflicts of interest. The regulations are complex and the process of preparing to implement the changes has been challenging. How the new administration will support the changes is a big question mark.

Vice President for Business Affairs John Homburger explained the challenges faced by SUNY Plattsburgh. “With fewer students graduating from high school, we are forced to compete in the college marketplace by discounting, scholarships and other practices.” This approach leads to cannibalizing of applicants within the 64 schools that are a part of the SUNY system. He credits Dr. Rowena Ortiz-Walters, dean of the School of Business and Economics, with introducing a graduate program in Business Analytics and an online Accounting program that no other SUNY schools are offering, to give the school an edge.

As the Deputy Director for Empire State Development’s (ESD) North Country Regional Office in Plattsburgh, Erin Hynes explained that the state is committed to incentivize job creation and investment in the area. And NYS and ESD are doing just that: Over the past six years, via the Governor’s North Country Regional Economic Development Council (NCREDC) the state has awarded $423 million in funding for nearly 400 job-creating and/or retaining projects in the seven-county NCREDC region. Highlights include securing the future of Fort Drum through various housing initiatives, the City of Plattsburgh’s $10 million Downtown Revitalization award and a variety of Clinton County 2016 expansion projects including Schluter Systems, Plattco and Norsk Titanium.

Our Neighbors to the North
Years ago, the influx of Canadians to the region was seen as bothersome, at best. What a difference a few years makes as Table Two reflected on our growing economic connection with Quebec and the Transportation Equipment & Aerospace sector. John Bernardi outlined a new program, ALICE (Asset Limited, Income Constrained, Employed), that assists those who are employed but having trouble making ends meet and are not eligible for government programs, i.e., the working poor. Bernardi explained that growth in manufacturing would provide “a great opportunity to develop good paying jobs with a livable wage which can have an impact on poverty.”

Paul Sands explained, “Everything we do is enhanced by all these things. The companies and the people they employ are our customer base and they help us focus our needs and help us get leaner and better,” said Sands. For the arts sector, Montreal provides not only a captive audience but also a wealth of talent that would love to perform at the Strand. “We see an increase in people coming down from the eastern townships to attend events. People want what we are selling,” said Kretser.

Alex Forster sees the Canadian influx as “an extension of our local community; we don’t stop at the border,” said Forster. Although regulations prohibit working with clients who do not reside in the U.S., Christina Ubl also saw the Canadian connection as positive. “What’s good for the local economy is definitely good for us,” said Ubl.
John Homburger explained that specialized programs like Speech and Hearing, not offered in Quebec, make SUNY a destination for Canadian students. “We also have very unique adjuncts who come to teach,” added Homburger. “There is a level of our economy and services that would not be able to sustain itself without the influx of Canadian business and tourism.”

Erin Hynes reminded all at the table that the connection between Canada and the U.S. has always been there, especially in this region, with early trade and transportation routes dating back hundreds of years. “What we see today in Clinton County is a natural evolution of economic relations as the two countries’ foreign and domestic policies continue to be intertwined. With a shared border, this area will continue to have cultural, economic and national security needs in common,” said Hynes. She added that the region’s economy remained rather level through the last recession in large part due to the “Canadian bubble” that often serves as a buffer to the wide swings that were seen in other areas of the country.

Reasons for Optimism and Concern
With unemployment in Clinton County hovering around 4.9 percent, Hynes sees this as a unique quandary. “The scarcest resource right now is workforce. A low unemployment rate no doubt is a good indicator of a region’s economic health. However, as companies expand and locate in the area there will be an increased competition for people. Both the private and public sector must employ creative ways of attracting potential employees into the local workforce pipeline. For instance, finding the people who have left the unemployment rolls, cap- turing those graduating seniors at the local high schools that want to enter the workforce, and recruiting people who grew up here to move back are the methods to explore,” said Hynes.

John Homburger sees initiatives like STARTUP NY, cross program- ming and a new Enrollment Management Office as great ways SUNY is adapting in a changing economy. “SUNY Plattsburgh is meeting its challenges head on to promote stronger enrollments through new academic programs and retention initiatives. An example of our impact in the community and region is manifested in spending locally by faculty, students, parents, relatives and friends,” said Homburger. “It is an exciting time for Plattsburgh businesses. The core economic infra- structure is diversified more than ever before and is steadily growing with support from all our community businesses and strong work ethic of our North Country employees.” The down side: “Government mandates draw focus away from classroom and faculty. It is difficult to serve all those demands and maintain stability.”

Christina Ubl is impressed with the students she meets as a mentor and serving on panels for women in business. “The questions they are asking are really great questions. They are focused on the big picture.” Uncertainty about the effect of regulations going forward does pose a challenge. “It’s hard to do your job when you don’t know what rules will be in place,” said Ubl. Alex Forster added, “I look at the people who are building community resources, like the people in this room. We are all working towards providing a service and it is reflected in the community. I am concerned with pensions on a federal and state level, and with the lack of discussion about the unfunded liability there. A lot of people are relying on that as a major source of retirement income.”

“Governor Cuomo sees us as a solid arts organization,” said Joshua Kretser. While he has some concern for donor fatigue, Kretser added, “My concern is outweighed by the fact that our community is ridiculously generous. The giving goes back for generations. It’s really exciting and I couldn’t be more proud of our community.”

Paul Sands added, “I see more evidence today of communities, elected leaders, businesses and citizens genuinely interested in finding ways to work together. If we can sustain that momentum, we’ll be fine. The uncertainty we’re facing has always been there, but a new administration coming in is vowing to ‘repeal and replace Obamacare’ without clarity as to what will replace it.”

Reg Carter maintained, “My optimism is based on the collaboration I witness every day throughout the North Country, the workforce development programs that continue to strengthen our human resources at every level, and the opportunity to continue building on the success of our transportation equipment and aerospace cluster.”
John Bernardi waxed philosophical. “Optimism for the future lies in our continued ability to create something bigger than ourselves. Concern for the future is overcome by our sustaining ability to do so.”