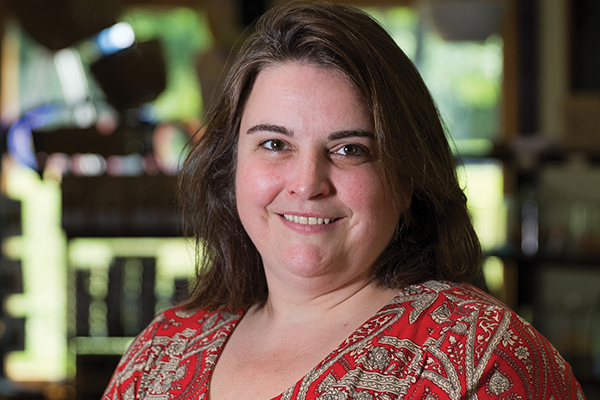 The cars full of people who whiz down Route 73 from Lake Placid into Keene, past the Cedar Run Bakery and Market just before the bridge, are missing a delicious gem. I admit I am probably biased since my husband and I are regular customers. Every Sunday morning we stop for coffee, orange juice, and a muffin for me and a cinnamon roll for him. We often come back for lunch later and sometimes even take home a frozen entrée or two for the freezer. We also make sure we have their ginger pecans on hand for salads and, if you peruse our kitchen closets, you’ll find other treats from the market. Like many others, we have become loyal disciples of Cedar Run, which is conceived, owned and operated by Kristy Deyo Farrell.

Most important, if you are looking for something hard to find in the food category, Cedar Run probably has it. Several times my husband and I have given up on finding an ingredient usually at the last minute and Deyo Farrell’s market has saved the day. She prides herself on stocking seldom used, hard to find items and with a mischievous, confident grin repeatedly says to customers, “Yes, of course I have it.” So instead of a trip to Albany or ordering online, we have learned to stay local and check Cedar Run first. And since the Keene Valley Grocery burned to the ground last winter, Deyo Farrell has tried to stock more so people don’t have to drive to Lake Placid or Plattsburgh for everyday food items.

But the heart of the store is what is made on the premises. A quick check of her website, www. cedarrunbakery.com, will give you a glimmer of the huge variety of items to take home, heat and eat. Breakfast, appetizers, salads, sides, entrees, and desserts can be found in her well-stocked cases. The website describes Deyo Farrell’s place as “a modern market with grandmother’s charm” which is a pretty good description of the unassuming store.

Next door is Cedar Run Wine & Spirits, just in case you forgot to get a bottle of wine or liquor to go with your cheese, appetizers or meal. Whether your taste runs to stuffed French toast to take home for breakfast, or fresh tomato cobbler, edamame succotash, and chicken cordon bleu for dinner, or rhubarb pie for dessert, you can find it or order it at Cedar Run. Maybe you just want a deli sandwich or a spicy noodle bowl for lunch, or maybe coffee cake and tea for breakfast. Whatever your choice, it is good homemade food.

Next you may wonder how this successful business came to be. Deyo Farrell explained simply, “My previous career choices didn’t work out.” Teaching school, working next to her brother Dave at Baxter Mountain Tavern, and a stint as a probation officer were all problematic in some way. Eighteen years ago, there was a space for a market in Cathy Gagnon’s building down the street. Deyo Farrell walked into the space with an idea and vision but zero training. Everything since then she has learned on the job, except baking. As she puts it, “I have always liked to bake and it was something I did well.”

After a couple of years in the Gagnon building, Deyo Farrell moved her market down the street to the building where the ADK Café was. There she had a thriving restaurant and a small market and bakery. When the local builder, Charles Segard, put up a building on spec about three hundred feet away in a choice spot next to the Ausable River, Deyo Farrell happily moved again and was able to design her own space. She dropped the restaurant side of her business, and decided to concentrate on the market and bakery along with the liquor and wine store.

Then came Hurricane Irene and the town of Keene was hit hard. Cedar Run was totally flooded, with freezers knocked out, floors ruined, and shelving and merchandise destroyed. With the help of friends and neighbors, Deyo Farrell reopened quickly but almost seven years later she occasionally still finds little bits of flood mud.

After Irene came another flood. This time it was people. Keene, Keene Valley and the Adirondack High Peaks have been discovered and are now deemed a choice destination for hikers, cyclists and tourists. This has proved to be both a blessing and a curse for local businesses. On the one hand, business is great and there aren’t enough good restaurants, markets and bakeries given the influx of people. On the other hand, bathrooms are overworked, strange items and trash end up on lawns, and rude people leave their mark on what has been a friendly, homey way of life.

When one of the local businesses runs short because of a lost shipment or other mishap, the other businesses help out and fill the gap. Deyo Farrell’s staff is also local, with seven full-time employees year round and an average of twelve during the summer months. The morning shift begins at 5:30 a.m. and she has gotten used to 5 a.m. phone calls from employees calling in sick. But she says she has finally organized the order of work so that she “can always open, even if everybody calls in sick.”

For Deyo Farrell, the 15 to 16 hour days during the summer have taken their toll. This year she is no longer running to and fro going to people’s homes and events with her catering business. Instead, catering has morphed into a “pick up your order” concept with a pretty pamphlet that lists her fresh menu. She is hoping that her many catering clients are happy and comfortable saving a little money and arranging how they want to serve their food. As much as possible, she uses and sells produce from local farmers and proudly lists those farmers who supply her store: Wild Work Farm, Fledging Crow, Craigardan, Blue Pepper Farm, North Country Creamery, Sugar House Creamery, Asgaard Farm, Juniper Hill Farm, and Donohue Livestock Farm.

Recently Deyo Farrell and her brother, Dave Deyo, bought the entire two story building that houses Cedar Run and the large garage across the driveway from the store. She once again has a vision and that is to expand Cedar Run by making the small kitchen into a deli prep area and putting a large main kitchen in the garage space. You can be sure that whatever Deyo Farrell turns her inventive mind toward will taste great.