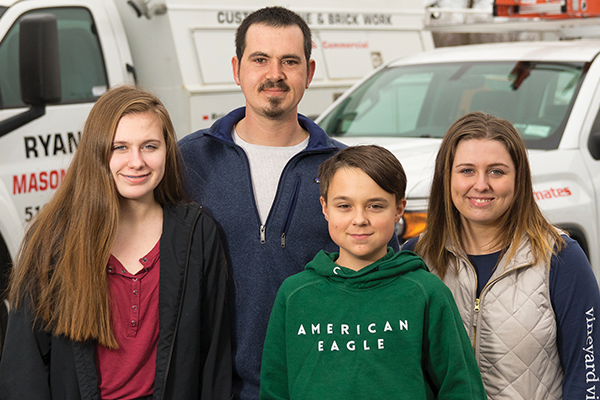 Sitting down with Ryan Smith Sr., you might not believe he has already paved the way to a long-term business legacy. Smith would be the first to tell you he started with a junk pick-up truck, a junk mud mixer, and $400. Soon he was getting calls he couldn’t keep up with. His first solo job was a $75,000 masonry job that he completed for $25,000. That job began a journey that has earned the company an impressive reputation in the North Country.

“I’m a local boy from the town of Peru,” Smith began. “I started working after school and the first time I saw the masons on the platform yelling ‘MUD!’ I knew that was what I wanted to do.” His drive and passion for the profession have propelled him to where he is today.

In a time when the U.S. workforce is facing dual challenges of keeping college enrollment growing while also combating a lack of skilled trade workers, Smith is a millennial who has disproven the labels that many have placed on his generation. Just out of school, he started working hard labor jobs and found out quickly that by taking on even harder, custom jobs, he earned more respect.

With a business built on having the best people in the local industry work on his projects, Smith makes it a point to be on every job site. “Being there and doing work on each job shows my team that I’m willing to do the hard work right alongside them. It also shows the homeowners that I’m engaged and I know what’s going on with their jobs,” he explained. “A lot of our work is from repeat customers, people who know our work,” he said.

That attention to fine detail makes a difference for his customers. When most people will do the work assigned, the Ryan’s Masonry team goes above and beyond. “For instance, if we put in a sidewalk, we bring in topsoil and spread it out on the sides of the sidewalk and apply grass seed,” Smith said. “These are the small details that clients don’t ask for, but they notice.” This attention to detail—in both his own job and to the people he serves—seems to be the winning formula in this business.

“We handpick our team. Sometimes we think that someone might be a good fit, but then they get on the job and it just doesn’t work out. It’s unfortunate, but we can’t keep people who aren’t a good fit,” Smith explained. This is a common theme for successful businesses. “Experienced workers are difficult to find, and finding people who are also a good cultural fit is also a challenge,” said Mindy Smith.

“Some of the guys who taught me still work for me,” Ryan Smith pointed out with pride. In this field, homeowners don’t want inexperienced people working on their projects; they want people who know what they are doing and look the part working on the job. We do hire younger staff, but we hire them as laborers first, with hopes that they’ll grow with the company.”

Having a hard-working team that’s the best in the business also deserves a culture to match. Growing up in a large family shaped both Ryan Smith’s work ethic and his drive to be a good business owner. “I always appreciated the things I had and worked hard for the things I wanted. I never saw the glass as half empty. To me it’s always half full,” he said.

Smith attributes part of the company’s success to his belief in giving back to the community and in being of service to those who don’t have a lot. “We donate and do work for all of the churches, because they make a difference in our small community,” he said. Ryan’s Masonry received the Jacob Brown Award for preserving the Battle of the Boquet monument in Willsboro, NY, and recently, Smith and his son, Ryan Jr., were in Willsboro to rebuild parts of the 1812 Homestead that burned down in 2016. Their work included rebuilding a ornate fireplace in the candle shop cabin on the site. It was a place that Smith Sr. visited often as a child, and he donated all of the materials and his own time to rebuild it. A key part of including his son in the project was to help pass along the skills that will be needed to run the business in the future.

Rising from the Ashes

The support that the Smiths have given to the community has come back to them in return. Earlier in 2018, the Smiths and the Ryan’s Masonry team lost the business’s main building due to a fire. “It was devastating,” Smith’s wife Mindy said. “We lost our entire store— our second home.” The building was a total loss. Fire crews called in heavy equipment, but instead of trying to extinguish the structure fire, they were relegated to protecting some of the industrial equipment parked outside of the building.

After the fire, the Smiths received letters, donations, calls, emails, visits, and well wishes. They were not only overwhelmed by the outpouring, but also moved by the sentiment. Welling up, Ryan said, “Even local churches took up donations to send to us. It blew us away that people would come out to support us like this.” In his voice, the tone of appreciation and pride for his community came through loud and clear.

With architectural drawings complete and plans under way, the Smiths are waiting for lab testing to be returned in order to determine if their site needs additional cleanup before tearing down the rest of the burned structure. They hope to start rebuilding in the late spring. “We plan to put up a block building and complete the work ourselves, with our guys,” Ryan said. They will continue to conduct business as usual, starting outside work in the spring.

Not Just Bricks and Mortar

Smith and his team pride themselves on the full-service work they provide. “We don’t just lay brick, stone, and concrete. We provide excavation, trucking, full-site work, roofing, framing, foundations, and much more,” he said. He tries to keep his team working through the slow months. Whether it be working on a rental property, or scheduling indoor jobs for the winter, Ryan and Mindy know what it takes to treat the team like family.

As they plan for the future, Ryan and Mindy Smith have their children in mind. They bring them to job sites and teach them parts of the business with the hope that one-day they will take over. But there’s no pressure. “If my kids take a different path, that’s their life, but I want them to know there’s something here for them,” Ryan said.