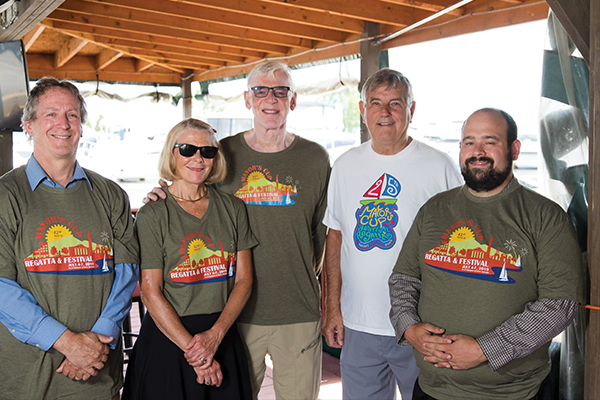 The Strictly Business editorial calendar called for a July issue based on the theme “Great Things to do in the North Country During the Summertime”. We had numerous suggestions for articles but a problem emerged. The biggest event, one that draws thousands of people to Plattsburgh — the annual Mayor’s Cup and Festival — would be over by the time SB went to press. Would we leave it out of the issue? After a spirited debate we chose to include it and use the opportunity to provide a view of some of the lesser known facts and figures about the event. Here is our look at a 42-year tradition that never gets old.

To get the inside story, complete with the history of the Mayor’s Cup and Festival, I sat down with Kjell and Joanne Dahlen, Jake DeSnyder, Mayor Colin Read, and Scott Matthews prior to this year’s event. They outlined the schedule of family friendly activities that would take place between July 4th – 7th: a Champy themed parade, the Glengarry Bhoys, fireworks, Plattsburgh’s Got Talent competition, a fire truck pull, more live music, the Farmers Market, a 52-mile bicycle race from Whiteface Mountain to Champlain Valley Physicians Hospital and, of course, the main event — the regatta itself with a post-race barbecue and awards at the Naked Turtle restaurant. “There is something for everyone,” Matthews commented. “It is a true partnership between the city and the Sunrise Rotary Club.”

LET’S HEAR IT FROM THE MAYOR

Mayor Colin Read, Plattsburgh’s 28th mayor, is originally from Vancouver, British Columbia. He grew up on the water and still has his International 505 racing dinghy. Read is enthusiastic about the city’s partnership with the Plattsburgh Sunrise Rotary Club. “Not only is the Mayor’s Cup a great sailing event but it is a fun time for families as well. It adds to the quality of life for people in the city of Plattsburgh and the entire area.”

Read explained the city has a direct cost of approximately $30,000 for the Mayor’s Cup. Add to that the indirect costs and the city’s investment for the four-day event is approximately $50-60,000. “Almost every department gets involved at some level,” he said as he outlined the contributions of the police, fire, recreation, and public works departments, and support staff. While Read spoke about the city’s financial challenges, he reiterated his and the Council’s commitment to sponsoring the event. Donations also come in from local businesses and organizations to support a variety of events during the weekend.

HOW DID THE MAYOR’S CUP GET STARTED?

The first Mayor’s Cup, a coordinated effort of then-Mayor John Ianelli and the Valcour Sailing Club, was held on Lake Champlain on July 8, 1978. Kjell Dahlen explained, “Ed Goodrich, an officer at Plattsburgh Air Force Base, came up with the idea. He talked with the mayor and Dave McDowell (Dr. David McDowell) from the Sailing Club.” Jake DeSnyder picked up the narrative, “Dave was a graduate of the U.S. Naval Academy and a sailor all his life. He deserves most of the credit for getting the Mayor’s Cup off the ground.” To recognize him for his role in fostering the regatta McDowell was honored with a special presentation by the Rotary Club on the 25th anniversary of the event.

WHAT IS A REGATTA?

A regatta is a series of boat races. The term comes from the Venetian-Italian language “regatta” meaning “contest” and typically describes racing events of rowed or sailed water craft. A regatta often includes social and promotional activities which surround the racing event and is usually named for the town or venue where the event takes place.

Although regattas are typically amateur competitions, they are usually formally structured, with comprehensive rules describing the schedule and procedures of the event. Regattas may be organized as championships for a particular area or type of boat, but are often held just for the joy of competition, camaraderie and general promotion of the sport.

Lake Champlain is 125 miles long and 14 miles wide, and known throughout the Northeast for its sailing friendly and not so friendly winds and waves. “The lake demands a healthy respect as winds can change on a dime and so can the waves,” Kjell commented. “We’ve had a couple of years when it was very windy. About 10 years ago we had to cancel the race for safety sake. Much more than 25 mile an hour winds and we are looking at canceling. We have been fortunate that we have never had any serious accidents but in sailboat racing it is not uncommon for boats to touch and cause some damage.”

The Plattsburgh Mayor’s Cup regatta includes three categories: racing (boats with spinnakers), cruising (no spinnakers) and multi-hull (catamarans). The race normally has approximately 50-60 entries. Kjell observed, “Racers are not just from Plattsburgh. We have people from Vermont, all over Canada (not just Quebec), from the Mid-West and the Carolinas. There is a contingent from Albany that races in the catamaran class. They come every year and spend the week camped out at the state park.”

Joanne Dahlen emphasized that many participants come not just for the race but for the whole four days. “The regatta’s economic impact for the area is significant.”

The Sunrise Rotary Club’s role in Mayor’s Cup weekend is to organize and operate the regatta – a daunting task. Besides bringing together North Country residents in a family-oriented celebration of summer, the club’s efforts help to raise money for a variety of community causes. Joanne reported that the proceeds from the sale of Mayor’s Cup t-shirts go to local projects such as the Max Moore Tree House, Elmore SPCA, Wilcox Dock Pavilion, and international projects like the North Country Mission of Hope and Shelter Box USA.

She explained, “Each year the annual Mayor’s Cup t-shirts are designed and printed locally.” Most years the design theme of the shirts focused on the lake and the mountains. The 2019 t-shirt logo took a different approach, looking at the city from the perspective of the lake and celebrating it as The Lake City.”

THE SPIRIT OF IANELLI AWARD

The Spirit of Ianelli Award, established in 2010 to honor of the late Mayor John Ianelli, is awarded to an individual or group that exemplifies the same “community matters” spirit that inspired Mayor Ianelli and his wife Helen 42 years ago. This year’s award was presented during Mayor’s Cup to the volunteers of the Plattsburgh Air Park Restoration Group who have volunteered over 1,700 hours to restore the FB-111 at the Clyde Lewis Air Park along with the B-47 and the Mini FB-111. Previous year’s recipients have included Leigh and Stephens Mundy, Janet Duprey, Gordie Little, Local Law Enforcement, Kit and Sally Booth, Bob Wallet, Roger Harwood, Matt Spiegel, and Bob Pooler.

Asked what they felt was THE best part of the Mayor’s Cup, all five of my interview subjects came up with essentially the same answer. “This event is the perfect example of what great things can happen when there are partnerships that come together for the benefit of everyone in the community. The Mayor’s Cup Regatta & Festival, a partnership that includes the City of Plattsburgh, the Sunrise Rotary Club, local businesses, and a whole bunch of volunteers, provides the ideal summer celebration for our community.”

Mayor Read described his role in the event, “I’m the chief cheerleader. I present some of the awards and give out the trophies. I really enjoy that. Isn’t it just amazing how a community comes together at these events and everyone enjoys themselves?”

DeSynder wrapped up our discussion with a look back at the lake’s history, “The best thing about the City of Plattsburgh Mayor’s Cup is that it is an event that was created to honor the sailing tradition and the military tradition on this lake. This is where we won our first naval battle. I’m really proud of what it does for the community and that it is free for everybody.”