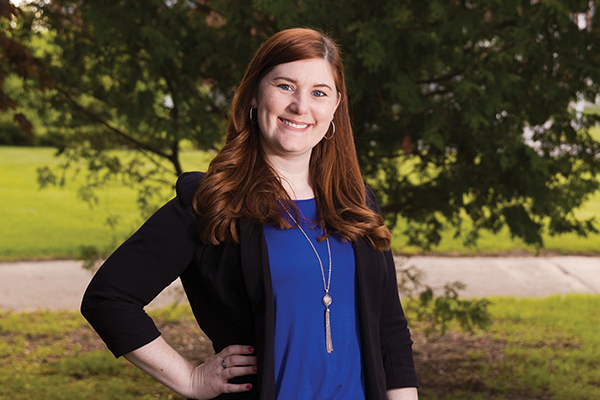 Community Involvement: Committee Member for the Alzheimer’s Walk for the Third Age Adult Day Center; Co-organizer for the annual Run to Remember; wrapping for the Christmas Bureau; United Way annual contributor and volunteer for the annual Day of Caring; ARC Festival of Trees decorator

Sarah Cronk-Duquette is a woman with not one, but two, missions —a professional mission and a personal mission. Her first job, as an operator at an answering service, often put her in contact with people in crisis—a woman in labor, a homeowner dealing with a serious problem. It was those experiences that gave her a sense of accomplishment and pride and showed her the importance of customer service. The skills she learned in those situations have stayed with her and shaped the way she approached her career.

After graduating from SUNY Plattsburgh with a degree in English Writing Sarah worked in journalism. What she found was that she cared more about helping people than writing about what was happening in the community. “It was time for me to move on,” she said.

At a time when her career was in flux, Sarah learned her mother had an incurable disease. Determined to make the best of a difficult situation she, along with family members, began a fund-raising campaign to help others in the area facing the same issue. Their efforts have produced impressive results.

What is your biggest professional success?

When my mother was diagnosed with dementia in 2011 my family began fundraising for the Third Age Day Center’s Annual Walk to Remember. The first year we raised around $1,500. From that point on our goal was to raise at least $5,000 each year. To date we’ve raised more than $60,000. In addition to fundraising, we have worked to raise awareness within the community. We’ve met many families who have had someone close to them with a form of dementia but no one wants to talk about it. My sister, Laura Cronk, and I have come to the realization that this is because there is a stigma associated with mental health issues. In order to combat this, we started a support group in 2016 to support caregivers. Our hope is the more people talk about dementia, the closer we will come to a cure.

Photography! I began with scenic photography, but over time I have become focused on families and children. My hope is to retire around 50-55 and do photography full-time. It’s not just taking photos that I enjoy, but working with people and connecting with them during important moments in their lives such as weddings, vow renewals and birthdays.

Patience. I’ve learned that not everyone works the same way I do. What I may consider an “emergency,” may not be one to someone else. I’ve realized that I always work with a sense of urgency and I need to realize that not everything can be done the moment I want it to be.

What is the biggest risk you’ve ever taken?

Leaving a job that was no longer fulfilling, despite not having a back-up plan. The position I was in was leaving me emotionally and mentally exhausted and I knew I couldn’t do it anymore. After encouragement from my husband and my father, I knew it was time to take the plunge. I was looking for a career that I could see myself retiring from. I was unemployed for a month before finding the position with Northern Insuring Agency, a company I plan to stay with for many years to come.

What is something that no one would guess about you?

I hate country music, but if I hear a country song from the 90s, I can stand up and sing every word — and enjoy it! Also, I can make friends with complete strangers anywhere I go.

You may be a very shy and insecure kid, but you’re going to grow to have a lot of confidence and will enjoy speaking with complete strangers. You’re far stronger than you give yourself credit for and the challenges of the coming years will eventually prove that to you.