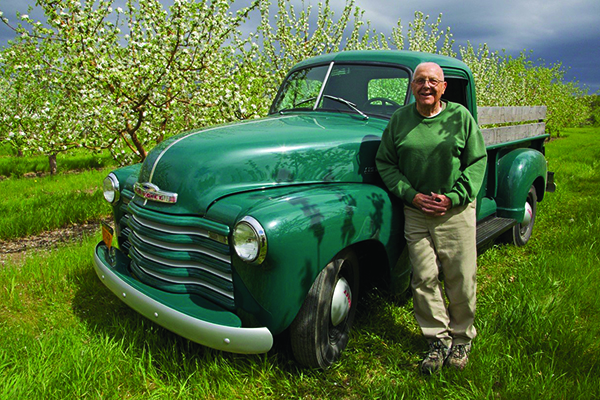 Most apple varieties or cultivars are propagated by grafting. Grafting is the process by which two plants are blended together. One is selected for it is hearty root stock (the part that lives under the earth, the foundation of the plant). The other part of the graft is the scion. The scion gives rise to all the plant’s leaves, stems, flowers, and fruits. It’s interesting to note that the growth of Rulfs Orchard in Peru, New York has followed a similar scenario.

In 1952 Bob Rulfs came to Peru, a recent graduate of Farmingdale University in the animal husbandry pro- gram. When he purchased his land, Rulfs had four cows and planned to develop a dairy farm. The property had no plumbing and no electricity, but it did have 12 acres of apple trees. Now, at the age of 87, he laughs at his younger self, “Who would start with four cows? No one, that’s who! But I did it and I’m proud of it!” And well he should be. Today the apple orchard covers 200 acres and the Rulfs recently moved into new building which houses its retail operation.

What About the Apples

Bob Rulfs’ father, Herman, was a grocer in Valhalla who insisted that his son go to college. Bob obliged and after graduation moved from the city to the North Country. When his parents would visit, Herman would do what he could to help on the farm. One day while Bob was busy with the cows his father asked, “What’s your plan for these apple trees?” Truth be told Bob hadn’t really thought about it. Well, his dad knew the secret to marketing groceries. He polished up a few apples and set them in a basket on the porch. Before night fall they disappeared and every basket he set out thereafter was scooped up. Not known to waste an opportunity Bob began to pack apples in hand tied bags. “I stood them up in a wagon, nice and tight and shoulder to shoulder and put out a baby food jar. Using the honor system people would leave 75 cents a bushel. Then folks would start knocking on the front door for change for a $5 bill and an apple business was born.”

Rulfs is candid that the new and improved roadside stand (opened in 2016) was not his vision, but rather that of his son Jon, the eldest of four siblings, and the only one that expressed the desire to work the family farm. Jon was so invested, he bought the farm from his dad in 1998. That enabled Bob to devote more time to the orchard while Jon took care of the girls (the cows).”

About a year before he was ready to break ground on the new facility Jon called a family meeting to discuss whether the third generation was ready for this next step in the business. His daughters, Shannon Rulfs and Amanda Wisher, eagerly stepped up.

Shannon is a graduate of Siena College with a degree in Accounting and Amanda completed her Business Administration studies at Clinton and Herkimer Community Colleges. Both women acknowledge that they were not raised with any sense of obligation to the family business, but when an opportunity developed for them to grow the business alongside their father and grandfather they wanted to take it.

The sisters laugh about how they are “North Country lifers”. They like that their children are going to have the opportunity to grow up as they did, even if it means they have to muck out the donkey pen at their newly opened petting zoo. The girls work with the help of their management team: Linda Hatch- Retail Store Manager, Jordan Bever-Produce/Greenhouse Manager, Bonnie St. Cyr- Apple Blossom Florist Manager, Riley Wilkins- Bakery Manager, and Richard Howard – Field Manager.

Under the management of the third generation, Rulfs has grown and diversified. With seven greenhouses, it offers shoots for home gardeners in the spring, fresh seasonal produce, U-Pick opportunities for berries at the start of the season and when the harvest is nearing completion, visitors can ride through the pumpkin patch as well as try their orienteering skills in the corn maze. In their new and expanded roadside stand they offer a wide assortment of baked goods and they still make their local favorite apple pies and apple cider donuts. Customers can use the new window, or walk in and enjoy coffee and a muffin or an ice cream cone. The lunch menu offers sandwiches, paninis and salads. Customers are welcome to enjoy their lunch in the store, venture out to the gazebo to enjoy a view of the orchard or take their food to go.

Rulfs Orchard has been serving the North Country for three generations. The business itself seems to have benefited from grafting, the same way the orchard does, with “the scion” of the third generation growing to be its very best, grafted to the hearty “rootstock” of the first generation.