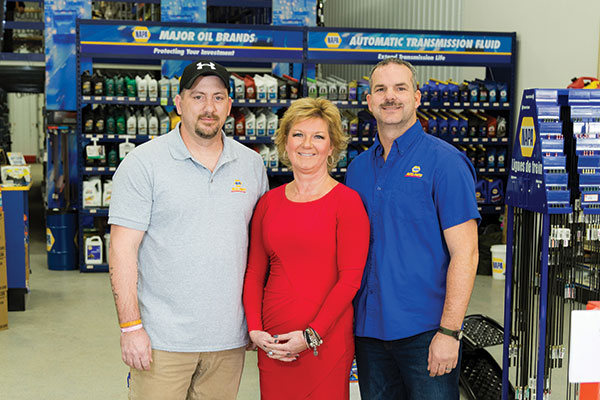 Julie Huttig came to the Syracuse area from Minneapolis, MN, 30 years ago, when Chrysler Corporation hired her as a service district manager. Her work brought her to the Adirondacks, where she met and married George Huttig and joined the Huttig team. She put her talents to work for the Huttig family business which, at the time, was Adirondack Auto Service. Since then, the couple has continued to grow—their dealerships and within the automobile industry. In 1999, the Huttigs opened Adirondack Chevrolet Buick, with Julie as general manager. Adirondack Chevrolet Buick and Adirondack Auto have become cornerstones in Elizabethtown, both as auto dealerships and family businesses.

More recently, in the summer of 2015, the Huttigs acquired the Nissan dealership on Route 9 in Plattsburgh, a venture that, Huttig said, allows them to “kick the tires” on the import market for the first time. While they are still getting the corporate particulars worked out, they are pleased with the impact they are having on the local market, even drawing from areas east and south of the North Country.
While that might sound all encompassing, dealerships aren’t the only businesses the family owns. The Huttig family has been in the automobile business since 1945, almost as long as the founders of their newest venture—NAPA Auto Parts.

NAPA was founded in Detroit in 1925 with “…a mission to improve the distribution of auto parts to serve the growing customer base of the industry at the time.” Across the country, NAPA now has 58 distribution centers, 16,000 Auto Care Centers and an additional 6,000 independently owned and company owned stores. A couple of those stores here in the North Country belong to Julie Huttig.

I talked with Huttig and her newest team at NAPA auto parts in Plattsburgh and while the pairing might seem curious, it actually became the definition of serendipitous. “When we bought the Chevy dealership in E-town, it had an auto parts store attached,” Huttig recounted, and once they had operational knowledge of it for a while, the opportunity to become affiliated with NAPA came up and they haven’t looked back. “We’ve been eager to get into the Plattsburgh market, and when the opportunity for a NAPA dealership here opened up, we were really happy. We’d been looking forward to it for a while,” said Huttig.

The Huttigs took the opportunity and when re-establishing NAPA in Plattsburgh, they built it from the ground up because they wanted to make sure their customers knew they were laying a foundation here to stay and were committed to growing with the marketplace. When Huttig put her Plattsburgh team together, she brought Bill Scheuer up from their store in E-town where he started as outside sales manager. Now Scheuer takes care of outside sales for both the Elizabethtown and the Plattsburgh stores. He also handles commercial sales, giving area shops the opportunity to benefit from being included in the NAPA family. “It’s the kind of company that gives shop owners an opportunity to benefit from the protection and reputation a national brand can offer, while maintaining the ability to run their own shop,” he said. With Scheuer on the road growing the business, the management of the Plattsburgh NAPA store is in the capable hands of Rich Babcock, who happily trucks in from Winthrop, NY, every day.

The new NAPA store will be carrying a larger line of parts and supplies to meet the demands of the bigger market. Being affiliated with NAPA enables Huttig and her team to access over 430,000 quality auto parts. And if they don’t have it on hand, NAPA has a distribution center in Albany that can get it to customers in 24 hours or less.

Huttig and her NAPA team are also planning ahead to meet customer needs by building in garage space where they can bring technicians from out of the area to offer different ASE (American Service Excellence) training so that North Country mechanics can stay up to date on industry service for their customers.

The NAPA store on Route 3 is the only place in the area that can custom mix auto paint and package it in an aerosol can. It might not sound like a big deal, but if your car/boat/RV has spent any amount of time outside, the factory paint probably won’t be an exact match any- more. NAPA has technology that allows them to scan a color and create a formula to match the current color and then package it in an aerosol can so that touch ups don’t need to be quite so costly any more.

That’s not all they are growing into. With the experience that Babock brings to the table, Plattsburgh NAPA is going to be able to grow its heavy equipment line as well. It’s not just spark plugs, fuses or run-of-the-mill auto parts NAPA has access to. The collision market and heavy equipment are additional areas where NAPA is in the ideal position to serve the Plattsburgh/North Country market.
Scheuer and Babcock are leading the in-store team of clerks and delivery people and pride themselves on the basic tenets of customer service. Their approach? “Greet people quickly, warmly and help them find what they are looking for. Doesn’t matter if they walk through the door, or call on the phone; we want to make sure no one is waiting around,” said Scheuer.

The well-oiled machine that is the Plattsburgh NAPA store hums along at a pretty incredible rate. It’s been said that attitude is a reflection of leadership and the attitude at NAPA on Route 3 couldn’t be more positive. The desire to help people with what they are looking for at whatever level of help they require—that’s what Huttig’s team accomplishes, day in and day out. Bringing energy and humor to the team along with decades of knowledge and generations of satisfied customers is no small feat. But Huttig does it with a smile, and makes leadership look effortless.

Huttig has had successes piling up in her rearview mirror. Not just in Elizabethtown and not just with automobile dealerships. After having had a chance to talk with Huttig and her NAPA team on Route 3, it’s clear they are in the pole position (the position at the inside of the front row at the start of a motorsport racing event) to join the other stars in the Huttig empire—without a doubt.