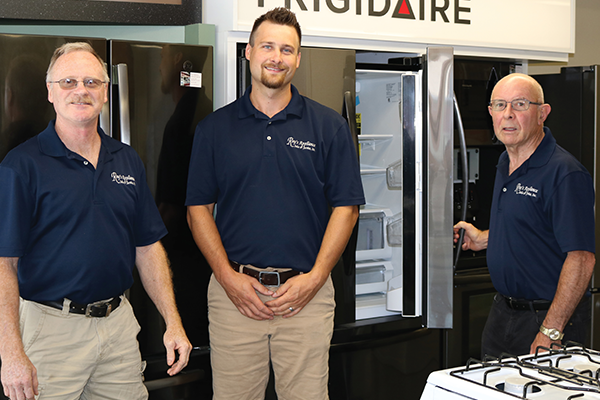 “This community has always been friends telling friends,” said Ray Guay from the well-organized showroom at Ray’s Appliance Sales and Service in Rouses Point, New York. “We work only with appliance manufacturers who support us as dealers and therefore support customers. As we become more of a ‘throwaway’ society, we want to sell products that have a longer life, and we install and repair those appliances. A product is only as good as the service that comes with it. Our emphasis is on service, and it works. We rarely advertise, yet we’ve increased our sales every year that we’ve been in business.”

Word-of-mouth advertising is important for every business, as each happy customer can steer dozens of new ones its way. It’s one of the most credible forms of advertising because a person puts their reputation on the line every time they make a recommendation. That person has nothing to gain but the appreciation of those who are listening.

Word-of-mouth is triggered when a customer experiences something beyond what was expected. Slightly exceeding their expectations just won’t do it. A business has to go above and beyond if they want their customers to talk about them. According to Nielsen, 92% of consumers believe recommendations from friends and family over all forms of advertising.

Ray’s Appliance Sales and Service has a loyal customer base of practically every homeowner, landlord, and retirement community within a 45-minute radius of Rouses Point, and has been specializing in the sale and service of major appliances (“white goods”) for 31 years.

As we continued our conversation, Guay fielded telephone calls. He patiently explained, step by step, how to fix a clogged garbage disposal (“Don’t be afraid of it, and if it doesn’t work, call us back”). He helped another customer shop for a new microwave and stove wall unit. As he kept up his end of a professional, yet colloquial, conversation, he was googling information online, checking for model dimensions, prices and rebates. “Let’s see if we can fix this thing,” he told a customer, “and if we can’t, I can get you a replacement that will fit in the same wall space by next week.”

“I’ve always liked the challenge of working hard to succeed,” said Ray Duprey, founder of Ray’s Appliance Sales and Service. “There’s no room in a business like this if you’re lazy.” Growing up on a farm and sawmill in Mooers, New York as one of 10 children, it took the combined efforts of Duprey, his parents and all his siblings to “live off the land” in a self-sustaining enterprise.

Electricity did not come to the farm until 1948; he remembers his mother washing clothes with a washboard.

After graduating from high school, Duprey heard Leeward Monette of Monette’s Furniture and Appliance in Mooers was looking for an employee. “He asked me what I could do,” said Duprey with a smile. “I told him, ‘I can do what you teach me to do’. He then handed me the keys to the service truck! When I told him I didn’t know how to fix appliances, he said, ‘You’ll learn’.” Duprey visited customers, went to service meetings with the manufacturers and read appliance books and manuals. He learned. “Monette’s philosophy was to give good service,” explained Duprey, “and that is how I’ve always run my business.”

Duprey worked for Monette’s for 25 years while raising a family and working on a dairy farm. After his children were grown, he began to focus on building resources for his own retirement. On a deliberately chosen favorable date, 8/8/88, Duprey rented a space in downtown Rouses Point and opened his own showroom. He had no loading dock or warehouse. When appliances were delivered, traffic had to be stopped on the street as well as the sidewalk and he carted each stove, refrigerator, dishwasher, and dryer inside, one by one. Customers, and their neighbors, from Monette’s—who knew about his ability to fix appliances and his dedication to customer service— followed him there.

At the end of 1994, Duprey purchased the building across the street, which had a warehouse and loading dock in the back, and stopped traffic one last time as he wheeled his entire inventory (60 pieces) across the street—with the help of his partner and son-in-law, Ray Guay.

Not counting Duprey, who is officially retired, but still comes to the shop each week, the business currently has four employees (two on the road, two in the shop) and sells refrigerators, freezers, air conditioners, BBQ grills, washers, dryers, dishwashers, dehumidifiers, garbage disposals, and their complimentary parts and accessories.

Ray Guay, a native of Beekmantown, attended North Country Community College and SUNY Oswego as he pursued a career in hockey. (He played professionally in Germany for more than two years). Guay was engaged to Duprey’s daughter, Amy, when Ray’s Appliance Sales and Service opened. Since Guay had experience in construction, and got along well with his future father-in-law (“good communication”), Duprey was already in the habit of asking him to help with deliveries. Although Duprey had only been in his own business for two months, he was already overwhelmed with orders. He invited Guay to be his partner, an offer the young man quickly accepted and has never regretted.

“I learned on the job and by attending classes given by the manufacturers,” said Guay. “Our main emphasis is service, and I like to sell people an appliance that will have a long life and be of a high quality so it can be repaired. I feel good about preventing the landfills from getting bigger.”

Like his father-in-law, Guay has three daughters. While they were in school, Guay started a girls’ hockey team at Beekmantown, and was the head coach for 11 years. (Guay just retired from coaching last year and is in the process of recruiting another coach to take over the program.) In addition to teaching teamwork, skating and puck-handling skills, and taking the team on the road to games each year, Guay spearheaded fundraisers and recruited players from seven other area schools to grow the program. “In our first game ever,” Guay recounted, “we beat Salmon River, the five-time state champion. It was amazing! Over the 11 years that I coached, seven girls went on to play college hockey and we won the 2013 National Championships. I wouldn’t have been able to do it without the involvement of Ray and my mother-in-law, and ultimately, Ray’s Appliances.”

With Ray Duprey’s impending retirement, Ray and Ray decided to bring Ray Guay’s nephew, Robert Guay, into the business in 2016. Beginning at age 14, Robert worked at Ray’s Appliance Sales and Service during the summer. After graduating from Chazy Central

Rural School, he earned an AS in Criminal Justice from Clinton Community College and gained valuable experience working for Fosters’ Tent and Canopy Rentals in West Chazy, and in the construction industry.

“I like dealing with customers, and I use the computer to work my magic,” said Robert. “I enjoy the numbers aspect of the business, (He does the accounting and has automated all the business paperwork.) and like to find rebates and competitive prices. I also go on the road to customer sites and enjoy doing installations and repairs as well. This has helped me learn the ins and outs of the business.”

Moving forward, Ray Guay and Robert Guay emphasized that keeping up with technology is the biggest challenge (although the internet has made it easier to find instructions and information on appliances) and they pledge to maintain a debt-free business just like Duprey always did. Their commitment to customer service and offering quality products from reputable and supportive manufacturers is unwavering.