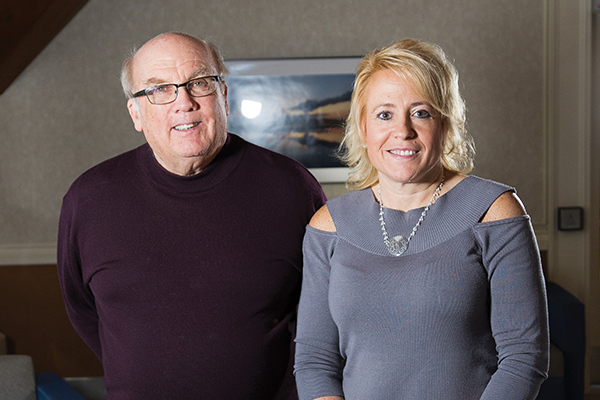 Nine Platt Hospitality Group is a legend and no wonder—it has been locally owned and operated for over 50 years. Bob Smith started working at his dad’s restaurants from the time he could stand up to the “pot sink” at 14 years old. Eventually he was promoted—to dishwasher operator—something he admitted with a chuckle.

Smith’s father, Ed, owned the two Howard Johnson’s restaurants in Plattsburgh. They were the foundation on which Nine Platt was built. Ed’s investment in the Howard Johnson chain was as timely as it was rewarding. The company’s business model was to capture road trippers and windshield warriors, and the location of both Smith franchises just a stone’s throw away from the newly operational Eisenhower Highway system ideally situated them to do just that. Call it incredible economic and infrastructure forecasting, or call it serendipitous fortitude, “it” eventually allowed Smith to own and operate six Howard Johnson restaurants and eventually a Howard Johnson Lodge.

Three of Smith’s Howard Johnson franchises were located in Vermont—on Williston Road, Shelburne Road, and in Montpelier. In New York, he owned a franchise in Watertown in addition to the two properties right here in Plattsburgh: one on Route 9 North, where Stewart’s now sits across from Gus’ restaurant, and the second on Route 3, where 99 Restaurant now stands.

After his early start at the sink, Bob Smith went away to further his education at Gannon College, and then served in the Navy from 1968 to 1972 during the Vietnam War. When he eventually wound his way back to the North Country and needed work, his father was pleased to welcome him. Bob had already worked his way up and through the kitchen, and then worked every job on the floor, or “front of the house” in restaurant speak, but he needed management training, so Ed sent his son to New Haven, CT. Being the type of fellow who makes the best of every opportunity life throws him, Bob met his future wife, Diane, while he was there. He and his bride returned to the North Country in 1973.

In addition to the Howard Johnson franchises, the Smiths also owned two independent properties—The Surrey in Plattsburgh, and the Crown N Feather in Watertown. As if those weren’t enough, they opened two Ground Round restaurants—in South Burlington and Plattsburgh—in 1979 and 1988, respectively.

As the Howard Johnson company went through its own business transitions, so did its franchisees. There are a great many theories as to why Howard Johnson’s—once a great American classic—stumbled. In 1980, when Smith took over the businesses from his dad, he needed to focus on what to do with the franchises that were experiencing some of the national struggle. Some properties he sold, others he leased, and others he converted. This “off-loading” of sorts allowed Smith to streamline his energy and efforts to a degree that wasn’t possible previously. Nine Platt continued to own and operate both of the Ground Round locations, and the Route 3 properties including the hotel.

Even as Bob Smith has continued to manage the businesses forward, he never forgot the foundation and maintained an active relationship with the Howard Johnson parent company. He remembered Howard Deering Johnson as a gregarious gentleman who was, in

Smith’s words, “the type of guy you wanted to hang out with.”

“Fourteen years ago on Friday the 13th, I got a phone call…” is a fairly ominous way to open a story, but that’s how Bob began to tell the story of founding the Independent Owners Cooperative (IOC) currently in place at the Ground Round. The company president was on the line with five franchise council members conferenced in when he announced that, effective immediately, all corporate restaurants would close. Just like that.

The president then got off the phone and left the owners, who owned 72 franchises among them, on the line. They quickly decided what they wanted to do and how they were going to go about establishing a supply chain for their restaurants. In establishing this IOC they paved the way for franchises in all industries to have another solution when a parent company goes belly up. “Five years ago we paid off all of the debts accrued from founding the corporation and we’re going strong!” declared Smith.

HOW SWEET IT IS

Keeping so many plates in the air is exceptional for any business; doing it for decades as the Smith family has, is a tremendous accomplishment. When SB asked Bob Smith what he is most proud of, he said with complete sincerity and without hesitation, “The people. We wouldn’t be anything without our employees.”

One of those employees is Julie Kramer, who was hired 15 years ago while seven months pregnant. “I got a great CFO and a bonus grandson,” said Smith with a laugh. Kramer came on board in 2002 and was exactly the type of fiscal manager Smith needed. She was able to see the future Smith wanted to build and offered some practical solutions that could lead Nine Platt into the future they envisioned.

Among some of the tough issues they dealt with was the decision to close The Surrey. It had been operating as a local banquet hall, and while it frequently had an events on the books, its fiscal reality was unsustainable. “People were disappointed. We had brides who had their weddings planned and we had to tell them that we weren’t in that business anymore,” said Smith. But Nine Platt handled the transition as best as it could, offering the affected par- ties alternatives and even footing the bill for a few luxury coaches to shuttle the wedding party and all of their guests from the new reception venue to their lodging all night. “We really tried to do it the right way,” said Kramer. “It certainly wasn’t ideal, but we did what we could to support our guests so they could enjoy their celebrations. We even ended up doing one last banquet because no matter what we tried, it couldn’t be rescheduled or relocated.” Kramer’s experience, intuition, and leadership led Smith to promote her to chief operating officer in the summer of 2017.

Today, the Nine Platt Hospitality Group still sits on Route 3. It is renovating what was once the Howard Johnson’s Lodge, now the current Best Western Plus, and it is deservedly proud of the project. Taking infrastructure from the ’60s and renovating it to today’s lodging standards—fiber optic installations throughout, an exercise room, a business center, and an expansive complimentary breakfast among the highlights—is no small feat.

When you’ve been a part of a successful business for over 50 years, people want to know your basic philosophy. For Bob Smith, it’s pretty simple: “There is never a right way to do the wrong thing,” he said simply.

The service industry can be known for its turnover, but the Ground Round has people who have been with the business for decades— from servers to kitchen staff and into the office. Nine Platt operates with a simple directive of being nice people; and that attitude is certainly a reflection of leadership.