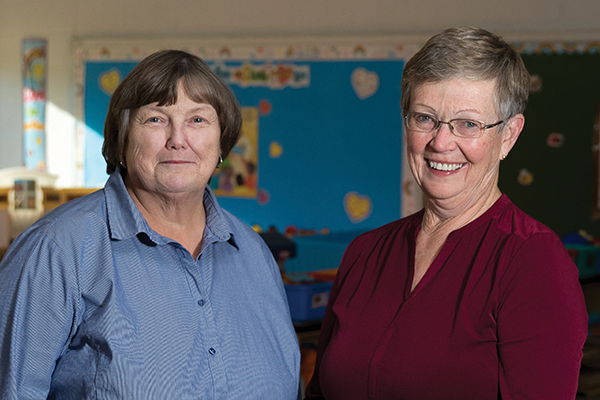 The merger of Seton Academy and Seton Catholic this past year was no easy task ac- cording to interim principal Mary Forbes but with a great deal of help from students, parents, teachers, alumni, maintenance staff, volunteers, and local businesses it was accomplished – under budget and on time for opening day.

According to Forbes, Seton Academy was created by the merger of St. John’s and St. Peter’s elementary schools in 2006. The merger of St. John’s Academy and Mount Assumption Institute (MAI) in 1989 created Seton Catholic which moved to its present location (the former Northside School) on New York Road on the former Plattsburgh Air Force Base in 2004. The schools now operate united as Seton Catholic with a total student population of 302, including 12 international students.

SB visited the school recently and was given a tour by Forbes which started in the west wing housing pre-K – 5th grade. Forbes explained, “The flags you see on display here represent the countries our students have come from, like Russia, Spain, Germany. Our international program brings students from around the world to our school. They learn from each other and we celebrate cultures, customs and holidays of other countries. This international theme started with the Brothers of Christian Instruction at MAI who recruited students from Canada and Latin America.”

Next, we stopped at Cara Chapman’s office. As the full time Director of International Students, she serves as a liaison between agencies, students, host families, and faculty. Students sometimes find Seton Catholic on their own through the Seton website (thesetonschools.org). “Right now, we have foreign exchange students from Thailand, China and Korea here,” she observed.

As we made our way through the elementary wing, students greeted Forbes with smiles and made sure to give their principal a big hug while they shared their art work with her. Their energy was infectious and it was obvious they love being at Seton Catholic. Outside the elementary wing we viewed the contemporary Guardian Angel Playground, part of the 20 plus acres that Seton Catholic has at its disposal for athletic use and sporting events.

Continuing our tour, we made a brief visit to the chapel where the brightly colored windows were painted by the students. Holy days are celebrated there and Forbes explained they use the chapel for special retreats and masses during Lent. In the high school wing we found plenty of activity, from students playing a game of indoor football in the gym along with the sounds of band practice. In the art room, we saw students busy working on clay projects and haunted houses. We stopped for a few minutes while Robert Wolf, art teacher for grades 6-12 gave us a demonstration of their latest marionette creation.

Principal Forbes wears many hats, one of which is Seton’s athletic director. “We don’t have enough students to make a team for every sport so we combine with other schools so students can play most any sport they chose,” she explained. “For example, we have our girls swimming with the Peru team, boys play modified JV and varsity football with PHS. For winter sports our girls play hockey with a combined team from several schools and the boys play hockey and swim at PHS. In the spring there is a combined lacrosse team for all schools through PHS.”

When asked to speak to Seton Catholic’s education program Forbes related, “Barbara Drake, our Coordinator for Student Success, is here to address the needs of all students. Some attend CV-TEC for career and technical education and its “New Visions” program for college bound seniors focusing on pre-med, chemistry, biology, or other health fields such as nursing. There is a selective admission process and students have to apply for limited spaces. Presently, Seton Catholic has three seniors in the program.

According to Forbes, Seton is dealing with declining enrollment as are most school districts. “Our class size ranges from 17 to 25 students,” she stated. “Our teacher to student ratio averages 1:15. Most of our teachers are certified or working toward their certification. Our pre-K program is full time, five days per week and we have before and after school care available from 6:45 a.m. – 6 p.m. At the end of the school day, Kathy Toner, assistant principal for the elementary grades and full-time teacher, joined us in Forbes office. Regarding the merger she said, “Change is always hard but the children were amazing. No bumps as far as they were concerned. We have a blended tradition from both schools here and we tried to be sensitive to the needs of the older students and the younger ones.” Forbes observed, “The merger has been positive for all of our students. The older ones have volunteered to be reading buddies with the younger ones. It’s amazing to see.”

Toner and Forbes are not new to mergers, having been involved with those at St. Peter’s, St. John’s and MAI. Forbes said, “The best thing about all of this is that we are all under one roof now and we have a revived spirit. Our plans were successful. It’s great.”

Forbes and Toner agreed that the biggest challenge of the merger was the time crunch. The school council voted in May and they had from the end of the school year in June until September to pack up, load trucks, move equipment, unpack, get classrooms settled and come up with class schedules. Forbes said, “I cannot tell you how thankful I am to all the parents, teachers, students, alumni, and volunteers who helped, especially the maintenance team. They worked tirelessly.”

The culmination of everyone’s effort was a celebration on September 28th when Bishop Terry LaValley visited to say the very first mass at the new campus and to dedicate the Guardian Angel Playground. Forbes recounted with a big smile and obvious pride, “The older children paired off with the younger ones, holding hands while going out to the playground. That was something. You could see bonding and pride. Our merger has created something special.”

Christopher Hay, a member of the last class to graduate from St. John’s Academy in 1989, is the president of the 12-member Education Council for Seton Catholic. Hay spoke to SB to address some of budgetary questions regarding the recent merger.

SB: WHAT WAS THE COST OF THE MERGER?

SB: WHAT ARE THE EXPECTED COST SAVINGS BY MERGING THE TWO SCHOOLS?

CH: “We’re still trying to refine what that number really looks like. We had assumptions going in. By not having to maintain two buildings we will obviously save on such things as heat, lights, snow plowing, and maintenance but there will be some additional costs at the new campus.”

SB: WHAT ARE YOUR SOURCES OF FUNDING?

CH: “Our funding comes from several sources such as tuition, parish donations, the Diocese of Ogdensburg, individual donations, and fund raisers. We are getting away from having a lot of small fund raisers and instead focusing on one big one for the year which will be our annual gala with a live and silent auction.”

SB: NOW THAT THE MERGER IS COMPLETE WHAT ARE YOUR THOUGHTS?

CH: “Being a single campus fosters a broader sense of community. It’s great to see the high school students helping out with the elementary students. This is something we have wanted to do for years and it came down to some creative facility and classroom usage.”