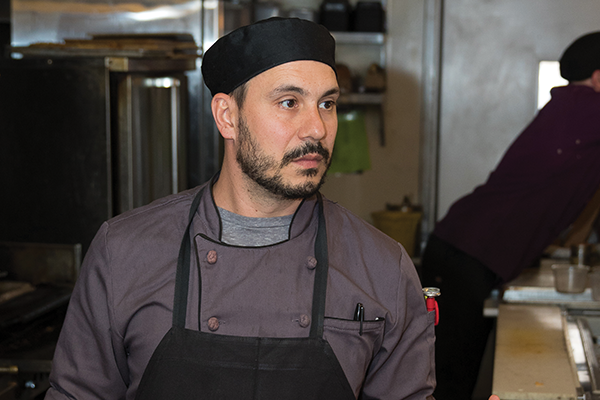 There is no denying it. The restaurant industry is a tough business. The success rate is better gauged in half lives, or longevity, rather than financial terms like return on investment. Which is why the upcoming seventh anniversary of Chef David Allen’s Latitude 44 ̊ Bistro in Plattsburgh, New York is a big deal. To paraphrase the words of Sally Field’s Oscar speech, “Right now, you really like me.”

Great chefs don’t just appear fresh out of a local kitchen or culinary school. They train and train and hone their skills at a variety of venues. Luck is only a factor in the sense of the phrase, “Luck is when preparation meets opportunity.” And with Allen, it took a while to hear the culinary call. A Chazy native, his first job at the age of 16 was sup- porting himself as an emancipated minor by working in the kitchen at Fletcher Allen, now UVM Medical Center, in Vermont.

After completing high school, he took computer classes at the Community College of Vermont. On the recommendation of a friend, Allen enrolled in the New England Culinary Institute (NECI) and that was when things clicked. An internship at The Breakers in Palm

Beach, FL solidified his passion for cooking and, upon graduation, he headed west to Las Vegas for more experience in fine dining under the chef at Lutèce, who was also a NECI graduate. It was there that he honed his presentation skills, working as a chef tournant (a chef who can work in any part of the kitchen).

But home and family called, and Allen returned to the North Country, where he worked a five-year stint in the kitchen at Irises Café and Wine Bar, followed by Michele’s Restaurant. After Michele’s closed, Allen opened Longitude Catering at the Rambach’s Bakery front counter area. But Rambach’s owner closed the bakery soon after Allen’s arrival, and that’s when the opportunity part kicked in.

“Thinking back, I was a kid when I opened Latitude,” said Allen. A kid with more culinary experience than most chefs in the region. “I didn’t know if I wanted to own a restaurant. Pete Whitbeck worked with me and offered great incentives to take over the space that had been Michele’s. It feels like just yesterday and it also feels like a life- time ago.” The doors opened at 5131 US Avenue in May of 2012.

“We have had such great community support from our first day. Many of our early customers still come back on a regular basis,” continued Allen. “I attribute our success to the fact that I was able to work in the area for as long as I did and I got to see what the area wants.” What Allen wanted was to create a comfortable, home-like atmosphere for patrons. The restaurant’s no reservations policy is designed so that they never have to rush a party out.

Dining out in many of the region’s restaurants, from Lake Placid to Montreal, keeps Allen inspired and current. He is passionate about presentation and loves seeing guests’ reactions to a plated dish. “At this time of year, farmers in the region reach out to us and let us know what they have,” he said. “We source exclusively from the area. You support the community that supports you.” Allen is proud of the restaurant’s gigantic herb garden, which inspires dishes and signature cocktails for the bar all summer long. “Right now, I have 240 seedlings for the garden sprouting at my house,” he said.

Allen relies heavily on Meadow and Mountain Farm in Moriah, New York for items year-round. He explained, “We get eggs, maple syrup, tomatoes, squash, and pumpkins and even wreaths to decorate the restaurant at the holidays from them.” He is also working with a new fish supplier to obtain the freshest catch for his customers. “The fish are out of the water and here the next day,” he said. “Everything from Alaskan halibut, to bluenose bass and hamachi. I enjoy working with quality items. We take pride in everything we put on the plate.”

Never one to remain static, Allen works to keep things fresh and interesting. “Our catering is growing all the time and we are constantly trying to improve,” he commented. “We added a pergola for outdoor seating during nice weather. We change the menu with the seasons and always bring back the items people really enjoy, like the mushroom risotto and duck wings. We are playing with ideas like including more specials and having a smaller menu.” Customers need not worry, though. The restaurant was built on bistro favorites like the Fish and Chips, Crab-Stuffed Sole and seasonal Risottos, the Grilled Chicken and Bacon and Margherita Flatbreads, and lest we forget, the Baby Spinach Salad with a generous topping of goat cheese, dried cranberries, red onion, and candied walnuts. Those favorites are not going anywhere anytime soon.

As far as kitchens go, Allen feels his might just be the best place in the area to work. “You get an opportunity to work with an experienced chef and learn everything,” he said.

Allen could not be happier with his current kitchen staff. “They work very hard for me and for our guests. They see and recognize how hard I work and will often tell me, ‘Go home, chef. We’ve got this.’ It’s a great feeling.” Sundays and Mondays are family days, spent with fiancé Ashley Peryer and his three daughters, Alaire, Calla and Amirah.

A little competition never hurt anyone, and the vibrant, ever-expanding dining community in the downtown region only inspires Allen further. “The new restaurants are drawing people to the area, and more will come. It’s great for everyone,” he commented enthusiastically.

“I am excited the community has allowed us to be here for seven years. I thank everybody for their support. I still feel like the new guy.”