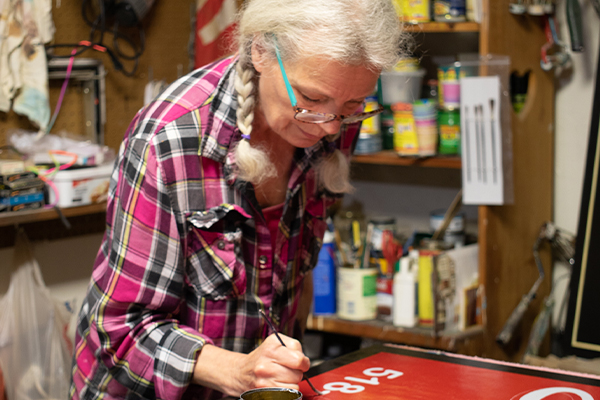 KC Reiter has left an enduring mark on the North Country over the past 35 years. Many of the region’s signs were hand carved and hand painted by Reiter in her Morrisonville garage, where she operates her business, The Art Works.

The City of Plattsburgh, Village of Champlain, Rulfs Orchard, Meadowbrook Healthcare, Plattsburgh High School, Mountain Lake PBS, and the Olympic Motor Inn in Lake Placid all showcase Reiter’s work. She has even hand painted several delivery vans for Nelson’s Flower Shop and other vans and trucks.

Reiter grew up in Holland. She was named for her paternal grandmother, Geeske, who was from the province of Friesland. Reiter was trained at an all-girls school to work as an executive secretary. She met her husband, an American businessman, while both were working at the same company. They lived together in Holland, then moved to California, Hong Kong, Canada, and ultimately to Plattsburgh.

Reiter explained that Geeske is a difficult name for English speakers to pronounce, so she was called many different names. “The name Kasey stuck,” Reiter recalled. “At the time, we were working with a Japanese businessman in Osaka who would send me telexes and address them to KC.” Telexes were an international system used to transmit printed messages by teleprinters using the public telecommunications network. They were ultimately replaced by fax machines in the late 1980s. To save money, messages were abbreviated as much as possible; Reiter’s name was shortened to KC and she has stuck with it.

THE ART WORKS
Reiter was always been interested in art and took courses where she learned sculpting, chiseling and carving. “I loved it,” she said. “My new career was born.”

Reiter opened her sign business in 1985. Her husband died unexpectedly two years later when her children were just four and six years old. The business provided her with the flexibility she needed as a single parent. “It was perfect because I was home and I could make my own hours,” Reiter said. She was able to attend sporting events with her children and drop them off at school. She often worked late at night to finish projects.

Reiter uses a variety of hard and soft woods such as mahogany, redwood and cedar for her signs, which can be designed as freestanding or can be mounted. She also uses high density urethane which is durable, uniform and carves like wood, but does not crack. For finishing she uses high quality enamel paints and 23-carat gold that is carefully glued and brushed into the grooves to produce shiny, eye-catching lettering.

Reiter’s primary tools are chisels and a mallet. “I still use the same set of Marples chisels that were gifted to me in a beautiful handmade box in 1985,” she recalled. She also uses a jigsaw to shape her signs and occasionally uses a router to form the edges.

Although her signs hold up well over time and the elements, they do need to be cleaned and sometimes the paint needs to be redone. “That’s something I do that not too many other people do,” she said of renovating old signs. “It’s really a pain,” she added with a laugh. “You have to sand it all down and start from scratch. I consider it a service,” she said, adding that restoring one of her signs is like visiting an old friend.

SAME PROCESS
In the early days of her business, Reiter recalls confidently telling customers she could do what they were asking, even when she didn’t yet know how. “I just fudged my way through it.” She subscribed to sign-making magazines and took books out of the library to teach herself new techniques.

Over her more than three decades in business, the technology has changed and evolved, but Reiter prefers to continue creating signs the way she has always done. Most other sign companies use machinery that does the carving and shaping. Reiter admits that what takes her two days could probably be done on a machine in an hour or two, but for her the process is important. “It’s like meditation. Once I start carving or painting, I get into this zone and it’s a happy place.” Time melts away and Reiter is at peace and happy when she is working on a project.

Reiter is always happy to offer advice and suggestions to customers who are trying to fit a sign to a particular space, although they do have to work within the constraints of the local zoning laws. She also designs logos and sign artwork if needed. “I enjoy the designing process, especially when I do it collaboratively with the customer.”

One of the biggest mistakes that businesses make is trying to cram too much onto their sign, Reiter said. Passersby only have a few seconds to see the sign as they drive by, so it is important to choose the message carefully. “You’ve got to be sure you make clear what your business is.”

OUTSIDE ART
Signs and a hand-painted Bob Marley Adirondack chair adorn Reiter’s back yard. She joked that she wants to hang discarded signs along her back property line as a decorative fence and a scrapbook of some of her work.

In addition to the hundreds of signs around the North Country, Canada and Holland, Reiter is also proud to participate in Outside Art: Plattsburgh’s Public Art Project when she is able. She painted the Plucky Rooster mural with Meredith Jacobs near the Strand Center for the Arts. She is pleased to see the project really transform the city into a more vibrant place. A map of all the mural locations has been created and is available at several local businesses. “There’s so much talent in this town. Everywhere you look there are creative people,” Reiter concluded.