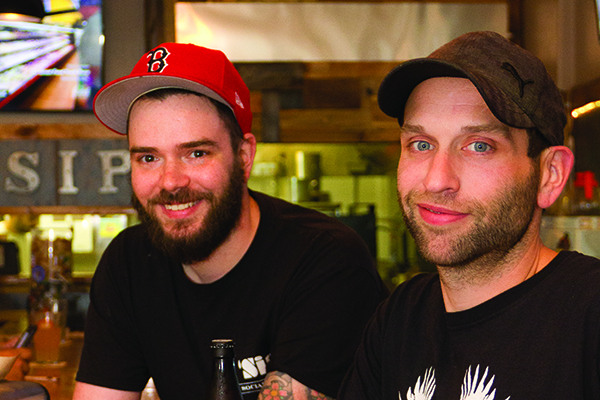 It’s true: Nothing ever tasted better than a cold beer on a beautiful afternoon with nothing to look forward to but more of the same. I didn’t make that up; Canadian essayist and professor Hugh Hood did. But I like it and thought I’d share it.

At Sip, the small and hip (but not in a hipster way) restaurant on Brinkerhoff Street in Plattsburgh, sharing is what they do best.

“We like the idea that when people come to Sip for food or drinks, what they are really looking for is a social experience,” said Kyle Dyer, co-owner of the new restaurant, which opened in February 2017. The menu is full of what he and his best friend and co-owner Dean Jolly call “social food.” Their intention is for guests to order a couple of items from the menu and share them while they enjoy each other’s company.

Indeed, on my first visit to Sip, I came with three friends and sharing is exactly what we did. We each ordered a different tray of tacos, tried one, and then passed the tray to the right. I can’t remember the four different types we sampled, but I do remember playfully arguing over which were the best. All of them were unique and delicious.

My favorite part of any meal is the appetizers; I’ll often order two or three and call it dinner. On my second visit to Sip, I started off with what I can only describe as my momma’s homemade red pepper jelly with Vermont cheese and crackers, along with a tray of roasted red pepper hummus and crostini made fresh that day, and mussels. Dyer came to the table to talk with me about the food at Sip, and we munched on the cheese and crackers while he shared some insights about his business.

“After high school, I traveled around the country and found myself working in the restaurant industry. I worked as an account executive for Yelp for a while,” explained Dyer. His interests and what he said was a need for a lifestyle change brought him back to the East Coast where he and Jolly eventually teamed up to open Sip.

“I had gastric bypass surgery in Saranac Lake, and it totally changed my life,” said Dyer. “I began to see food in a new way and I knew that whatever we did here at Sip would be fresh, homemade, simple, and clean.” The young business owners have applied that approach to their business model in general.

Dean Jolly came out of the kitchen to talk about the business of the cooking and explained, “The key is to keep the ingredients uncomplicated and fresh. The sauce for these mussels has about five ingredients. That’s it,” he said.

I asked Jolly and Dyer about the Farm-to-Fork concept. They had a shared response: “Everyone likes the idea of Farm-to-Table cuisine, and it’s great when it makes sense,” said Dyer. “But the truth is, in order for a business model to really work in northern New York without pricing 90 percent of the local demographic out of your restaurant, you can’t really live and die on that sword.”

Jolly explained that they purchase fresh ingredients from local growers when they can (often buying from Dyer’s uncle, who owns Shield’s Vegetables and Dyer Farms dairy), but if local spinach is, for example, $9 a pound, they simply refuse to pass that cost on to their customers. “We’re just trying to be realistic and honest,” he said. Dyer laughed and added, “You know—it’s just really hard to get fresh ocean fish to Plattsburgh on the same day. Ours is caught on Wednesday, packed and shipped on Thursday, and arrives here on Friday. We feel pretty good about that!” The business partners offered a tour of their small kitchen, promising there wouldn’t be frozen meat or packages of precooked frozen fish used in their fish tacos.

I was naturally curious about their experience choosing Sip’s location. The Brinkerhoff Street pub is located off the beaten path, and I had the assumption that its proximity to the First Presbyterian Church might have been a challenge. The New York State Liquor Authority’s Alcoholic Beverage Control (ABC) Law prohibits certain licenses from being issued if the location of the establishment is on the same street and within 200 feet of a building that is used exclusively as a school, church, synagogue or other place of worship. Commonly known as the “200 foot rule,” it applies to any retail establishment where liquor will be sold for on-premises consumption and any retail establishment where liquor or wine will be sold for consumption off the premises.* Dyer explained that the 200 foot rule would have been an issue if Sip had tried to get a full liquor license, but serving wine and beer as they do is allowed. * https://www.sla.ny.gov/system/files/200-500-foot-rules-050213.pdf

“Like any business, ours required some workarounds,” said Dyer. “We want to be able to serve cocktails, but without the liquor license, we had to get creative.” Dyer laughed recalling the 2017 Super Bowl. “My wife spent the day creating variations of drinks using wine, fresh herbs, and other mixers. She served them to my mom—who is probably the least venturous drinker I know—until she found ones that my mom could enjoy.” Dyer said that in general, Brinkerhoff Street is a great location, and he and Jolly look forward to the energy being brought to what is becoming known as Plattsburgh’s “Arts Corridor.” He said, “We are hopeful The Strand will bring more people this way.”

By this point in my visit to Sip, I’d managed to sample an oatmeal stout, a couple of haddock tacos, and a yummy slider made on a homemade roll. The food was delicious, the company delightful. I wondered aloud as I contemplated my full stomach, “It must be so much fun to be a chef—to be able to be this creative and have people truly appreciate your talents.”

“Listen,” Jolly said. “I’m not a chef. Those people go to school and truly study food inside and out. I have a lot of respect for them and the time they put in to their work.” He flashed a sly smile at me. “I own a restaurant and I can cook.”