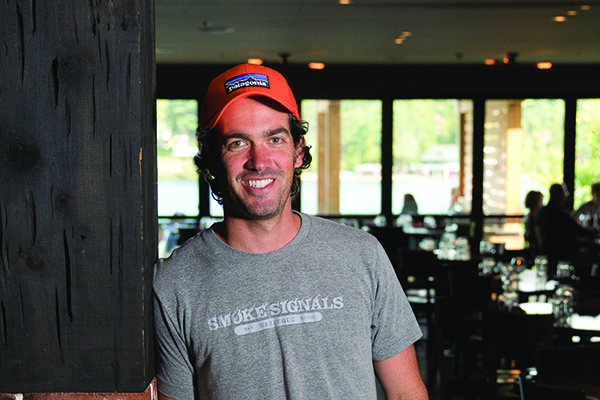 According to Stoltz, he and Layla were foodies who loved food and fell in love over food. Instead of a date night out, they would cook in. And the idea of starting a restaurant was natural for Jason, who grew up in the shadow of his mother’s very successful wood-fired pizza restaurant—Pizza by Elizabeths in Greenville, Delaware. The idea for that restaurant began with his mother Betsy’s Friday night make-your-own pizzas. He remembers sitting in the family living room at age six, helping his mother refine her restaurant concept with her friend and business partner.

After graduating from Georgetown and American Universities, Jason and Layla were traveling in Europe and wondering what the future held for them when they came up with the idea of barbecue in Lake Placid—a place where they’d both spent time and that they thought of as special. When they returned to the States, they bought a smoker and proceeded to experiment. “The first things we did in the smoker were awful,” Jason said. But they kept at it and now, four years after opening their restaurant, Smoke Signals is #1 on Trip Advisor among Lake Placid restaurants and has grown 20–35 percent a year.

The restaurant has a great view of Mirror Lake and the mountains beyond. Its interior design feels more urban industrial than Adirondack rustic, with hi-tech lighting throughout and reclaimed wood and barrel staves in the ample bar area. A new deck beyond the large windows overlooking the water helps take care of the summer overflow. On the second floor, which used to house a church, the Stoltzes have created a large, vaulted-ceiling space that is used for weddings and large parties, along with another smaller room for private functions. Initially the large hall was intended as a concert venue, but the pair discovered that live music was both tough on the building and a difficult business in which to succeed. The Stoltzes now host smaller music groups downstairs in the bar area.

Jason and Layla test recipes repeatedly at home before trying them in the restaurant, and the results show. Everything in this upscale barbecue is made from scratch, with smoke used in innovative ways. The star and core of their business is the thick, juicy brisket made from certified black angus beef. While the brisket has an intensely meaty flavor that melts in your mouth, the pulled pork runs a close second.

On a tour of the kitchen, Jason explained, “We have a saying here. It’s ‘from smoker to table.’” It’s hard to pick favorites because all of the food is really good. Take the buttermilk cornbread for example. It’s from a recipe carefully developed by Layla and the result is scrumptious. Jason pointed out that everything they serve is fresh and the food certainly tastes that way. He said, “The kitchen doesn’t reheat anything. Instead we repurpose leftovers, such as the brisket in the shepherd’s pie croquettes.” And at a time when every restaurant worth its salt says it uses local ingredients, Smoke Signals really does whenever it can—including Fledging Crow vegetables and beef from Kilcoyne Farms and Donahue’s Livestock Farms.

Besides the food, the bar serves a variety of craft beers on tap, a list of very good wines and whiskeys, plus an intriguing choice of inventive cocktails with names like Rhubarb Collins, Buffalo Manhattan, Blackberry Moonshine Margarita, and Pumpkin Russian.

According to the Stoltzes, they could have a higher profit margin if they chose not to cook from scratch and cut corners on their ingredients. But for them, the quality of their product is part of the reason they’re in business. The other is the art of cooking good barbecue. Their biggest challenge, especially early on, was the consistency of their barbecue—an all-important trait in the restaurant business, but especially in barbecue. When they started in 2013, the Stoltzes had four small smokers with racks, which resulted in a lot of variability between the middle, top, and bottom racks. “The first two years were tough. I can’t say we were always consistent,” said Jason. The restaurant now houses two huge state-of-the-art, digitally controlled
smokers with rotisseries. “Owning a high end French restaurant would be much easier,” Jason joked.

Whether running a French restaurant or a barbecue destination, a growing restaurant is a time-consuming commitment. Jason said that during the summer high season he works 60–70 hours a week, has 60 people on staff, and worries that they are reaching capacity in their smokers. He noted, “There are two briskets per cow and Smoke Signals is smoking as many as 22 briskets a day!” On a big day, they will serve as many as 800 covers, 300 at lunch and 500 at dinner. Added to that, they do 80–100 private events a year and cater off premise as far away as Albany.

Jason sheepishly confessed, “I’m an owner who likes to cook.” That means he can often be found behind the scenes in the kitchen cooking beside his head chef, Brad Young.
In the beginning, Jason and Layla did all the marketing, bookkeeping, and correspondence for their wedding and rehearsal dinner events, but they’ve now hired a person to work that end of the business. Their life has also been changed by the arrival of children. Their two-year-old daughter and the anticipation of another on the way have meant a big life style change for the Stoltzes, who thrived on building their business together and who still enjoy spending work time with each other.

Besides figuring out how to spend more time (working) together and meeting the demands of their budding family, their main goal is simply to be the best barbecue in the country. Jason smiled and said, “I love it when people come here from Texas and the Carolinas and think this is the best they’ve ever had.”