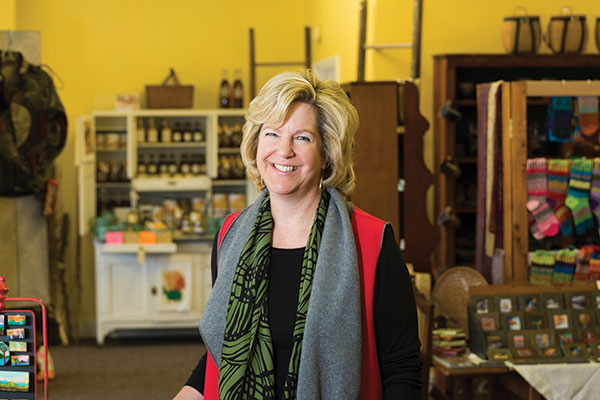 A reformed Wall Street banker turned antiques dealer and bed and breakfast owner/operator, Kristen Hardman is a natural curator of beautiful things, and she has sprinkled her gifts throughout the North Country from Elizabethtown to Willsboro to Lake Placid and now, thankfully, Plattsburgh.

Meeting Hardman for the first time is like meeting an old friend, and she has infused a familiar warmth into every inch of her new gift shop, Jackson & Callie. We met at the Boynton Avenue store on a snowy February morning. She wrapped herself in a soft white hand-knit blanket while I tucked myself into the corner of a fabulous chartreuse colored 1960’s sofa, taking in, first, the heavenly aroma of the store, then the spread of products—hand-sketched cards, pottery, alcohol ink dyed pillows, jewelry, brightly colored inspirational items, luxury tea, Danforth pewter, Caswell-Massey soaps, creams and lotions, and an entire wall of Stonewall Kitchen products.

Ninety-seven percent of Hardman’s products are handmade in America. “When I say unique I mean it in the classic sense—one of a kind. If you see a necklace, I don’t have seven more in stock. If you want it and it’s sold, you have to wait for the artist to make another. That’s the nature of it,” noted Hardman. She expressed her passion for beautiful and artfully made pieces and connected craftsmanship to strength of community.

Past the antique hutches and seasoned shelves filled with treasures, Hardman has created a maker space in a sunny corner at the back of the store because, she said, “This is about educating as well as selling.” It is Hardman’s perception that the up-and-coming generation, although quite smart and talented, have not been able to nurture their creative side like previous generations. Hardman aims for Jackson & Callie to be more than just a gift store and envisions a creative respite for anyone needing a break from the day.
Hardman and her husband Jim have been running a similar gift shop on Main Street in Lake Placid for the last five years. In that time, the Hardmans have seen the consumer market in Lake Placid shift from fine gifts and specialty products to mainstream souvenirs. Once the exclusive showroom for L. Post Rustics (award winning Adirondack rustic artisans from Au Sable Forks), the Cornerstone Rustic & Craft Gallery will close in March as Hardman focuses her latest business venture solely on Plattsburgh where so far, 100 per- cent of her consumer base is local. “We will maybe someday return to Lake Placid under the Jackson & Callie moniker, but then again maybe not, because I’m having a whole lot of fun here in Plattsburgh,” she said with a grin.

Anyone in the Plattsburgh business community knows how much we love to preach community and neighborly generosity. We like to think it’s different here, that our support networks are more genuine and generous than anywhere else. And when a businesswoman like Hardman comes to town, this community proves it. On Black Friday, when the store officially opened, local artist Lorrie Mandigo was at the shop at 7:15 a.m. with a coffee and breakfast. Country Expression and Punki’s (from up the road) sent flowers, Roger and Evelyne from Quiche et Crepe stopped by with a tray of pastries and the Adirondack Candyman made a personal delivery. “I didn’t ask for any of it,” said Hardman, blown away by the warm reception she has received.

The early interest (and distraction) from neighboring businesses, elected officials and local customers was such that before Jackson & Callie even opened, Hardman had so many visitors, she had to set the opening back about 40 hours. Warm fuzzies from new friends and neighbors are great, but for a business to actually survive it’s all about the plan and the numbers. Wisely, before jumping in head first, Hardman consulted with the Small Business Development Center, Susan Coffey (longtime owner of General Trading Company), and other successful entrepreneurs. All market research pointed to opportunity for her in Plattsburgh. Hardman set to work finding a space, setting up and opening before the holidays. “We’ve been going gangbusters ever since,” she said. “On Small Business Saturday, we exceeded our very best sales day ever in Lake Placid—by more than 100 percent—right out of the gate.”

She has kept the buzz going with a variety of print and radio advertising, and recognizing the potential of the Jackson & Callie brand, Hardman continues to develop her staff into a truly professional team. And even though it drives her crazy sometimes, she heeds advice from her husband, “Failure to plan is planning to fail.” She said, “This has the potential to be much bigger than anything I’ve ever done before.” In the spirit of community generosity, Hardman donated three auction items to the Foundation of CVPH’s Stepping Out for Your Heart event on February 16.

Obviously not a novice at business, Hardman’s professional story began at Credit Suisse in the ’80s where she was a private banking officer. By the early ’90s, though, she tired of the rat race and made a bold move to the Adirondacks. Locals quickly knew her as Mistress Moore from the 1812 Homestead. As executive director and curator of the liv- ing history museum in Willsboro, Hardman went to work every day in period character.

She played that role for nearly a decade before Senator Ronald Stafford appointed her to be the first executive director of the Adirondack Sports Commission in Lake Placid. The organization’s mission, led by ROOST (Regional Office of Sustainable Tourism) CEO Jim McKenna, was to create sustainable economic impact using sports tourism as the catalyst. The first five-year Ironman Lake Placid deal has Hardman’s name on it. “Love it or hate it,” she said, “our mission was to bring those events to Lake Placid and that’s what we did.”

Hardman’s other projects throughout the years have involved restoring an old church in Willsboro and turning a derelict house on River Street in Elizabethtown into the Woodruff House Bed and Breakfast—it’s the home she and Jim currently live in, and although they no longer operate as a B&B, there are still rave reviews at tripadvisor.com. Hardman apparently makes a mean breakfast. A response from the inn- keepers tells guests the B&B will be closing for a time—but not for good—with a special message from the cats of the home, “Jackson and his new playmate, Callie, eagerly await your return.”

With a heart for rescue animals, Hardman has served on the board of the North Country SPCA and has rescued many animals through the years. Jackson and Callie, her current rescue kitties, inspired the name for her new store in Plattsburgh.

A sign hangs by the door at the Woodruff House saying, “Enter as strangers. Depart as friends.” It’s an adage Hardman has carried with her to Plattsburgh where new neighbors are instant friends and stores of unique gifts are always treasured. Welcome to town, Jackson & Callie!