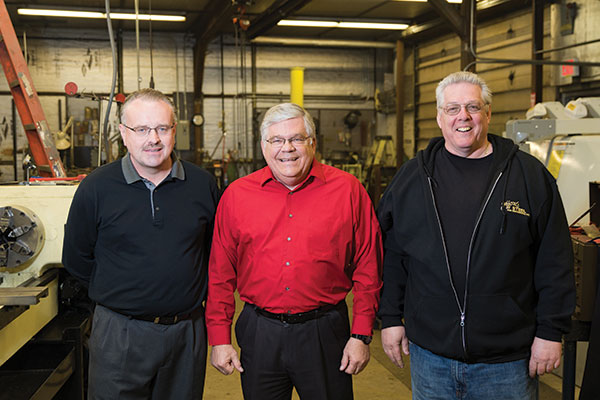 When the Institute for Advanced Manufacturing at Clinton Community College opens to students this fall, many of Jeffords Steel’s contributions to the building will no longer be visible. Jeffords rebar reinforces the concrete foundations of the building, and tons of structural steel fabricated at the company form the facility’s skeletal support. That’s the thing with structural steel—you might not always see it, but you’re awfully glad it’s there.

The 32-year-old Plattsburgh company has a not-always-visible presence that extends from Plattsburgh to Potsdam and throughout the Northeast. If you didn’t know to look while driving north on Route 22 into Plattsburgh, you might not notice a fleet of 18-wheelers loaded up with massive I-beams tucked behind a bank of pine trees. While you can’t see much from the road, a turn into the complex reveals what an enormous operation it is.

Larry and Judy Jeffords established Jeffords Steel & Engineering Company in Plattsburgh in 1985. They began operations in a 30 x 30 rental space, marketing structural steel products to local con- tractors. Since then, the company has grown to over 60,000 square feet of space with more than 100 employees and two locations—in Plattsburgh and Potsdam. In December 2016, the company added a new division, the Jeffords Machine Shop, at its Plattsburgh facility. Company founder and CEO Larry Jeffords said the machine shop completes the company as a steel fabricator. “We are now a 100 percent full-service steel operation.”

Jeffords Steel’s services can be divided roughly into two categories: large-scale structural and miscellaneous steel fabrication for industrial and commercial construction, and the smaller-scale products and services provided to local contractors by the Jeffords Steel Service Center. And now, with the addition of the Machine Shop, the company can handle even more specialized custom work.

Structural steel is the massive steel framework around which large industrial or commercial buildings are constructed and includes the rebar used to reinforce concrete foundations. Miscellaneous steel refers to additional steel elements such as supports and framework for stairwells, handrails, and ladders. Many of the stair rails on buildings at SUNY Plattsburgh are miscellaneous steel from Jeffords Steel.

As an American Institute of Steel Construction (AISC) certified steel fabrication company, Jeffords Steel engineers and erects structural and miscellaneous steel for major construction projects all over northern New York, Vermont, New Hampshire, and Massachusetts. In Plattsburgh alone, the company has provided complete structural services for the Plattsburgh Airport Expansion and the Schluter warehouse expansion in addition to the Institute for Advanced Manufacturing.

But its presence extends far beyond the immediate area. The company also provided the “skeletons” for Bevier Hall at SUNY New Paltz, Northwestern Medical Center in St. Albans, Vt.; the Kraft-Heinz String Cheese Expansion in Lowville; the Lake Placid Toboggan Run; the Dartmouth Athletics Pavilion and Dartmouth Hitchcock Medical Center in Hanover, NH; Adirondack Medical Center in Saranac Lake; the New England Center for Circus Arts in Brattleboro, Vt.; LFB USA Manufacturing Lab Facility in Marlborough, MA; the F.W. Webb Distribution Facility in Londonderry, NH; the Health Education Complex at Corning Community College in Corning; Cornell University’s Central Energy Plant in Ithaca; and the Building 2074 Hangar Addition at Fort Drum. The company has diversified enough that people around the country have come to them for projects, such as a custom homebuilder in South Carolina who enlisted the company to create two different rolled spiral staircases.

These major projects come to the company through the competitive bid process. Although the company regularly competes against firms from Canada, Syracuse, and Albany, it has been successful because of a reputation built on a strong tradition of customer service and the distinct advantages that come from its status as a full-service fabricator.

Kent Niles, fabrication operations manager, explained that when a general contractor sends out requests for bids, the Jeffords Steel divisions go to work—together. The company’s in-house engineers work with the structural fabrication team to assemble a detailed plan and pricing for the manufacture, installation and on-time delivery of all structural and miscellaneous steel necessary to bring the structure from blueprints to reality.

Niles pointed out that Jeffords Steel is unique not only because it has in-house engineers and now a full-service machine shop on site, but also because it maintains its own trucking fleet. That means the company can always assure that a project’s materials will arrive on time. “Most fabricators subcontract delivery of their fabricated steel,” said Niles. “Jeffords delivers 95 percent of the product that it sells. That means we control our own destiny. It gives us the advantage of being able to take better care of our customers.”

As an over-the-counter service provider, the Jeffords Steel Service Center is a one-stop resource for smaller general and individual contractors, welders, and even individual homeowners tackling DIY projects. Opened in 1989, it offers a large inventory of standard steel and rebar that can be pulled straight from the shelf, and serves customers throughout the Northeast—offering delivery to locations in New York, Vermont, Massachusetts and New Hampshire.

However it also relies on state-of-the-art, computer-controlled equipment and, when necessary, the expertise of Jeffords’ in-house engineers and detailers to safely and cost effectively provide customers with services like mitered and beveled saw cutting; plate shearing, cutting, bending, and rolling; pipe threading; priming and painting, and all kinds of other customized fabrication. It has handled custom jobs from bending rebar and engineering custom support beams for home remodels to fashioning the support for the U.S.S. Lake Champlain Bell in Peace Park on Plattsburgh’s waterfront, aluminum ship’s ladders, and even ironwork Adirondack style chandeliers.

Dan Jones, vice president for Steel Center operations, said that the Machine Shop is something company founder Larry Jeffords had planned to add to the company for years. “Previously, there were a lot of jobs that we couldn’t do because of the custom nature of the work. It’s been part of a natural progression towards becoming a complete steel fabricator,” said Jones.

Robert (Bob) Davenport is the Machine Shop’s new manager. Davenport ran his own machining business—R & S Machine—for 27 years, but when his adult children chose to pursue different career paths, he faced a decision shared by many small business owners. With no one to take it over, and finding it difficult to sell without adding his 30-plus years of knowledge and experience into the deal, he decided to liquidate.

At the Machine Shop, Davenport has been gradually outfitting it with the tooling and parts necessary to make it a full-service shop. The technology available for working with the materials Jeffords Steel uses is constantly changing and improving, and choosing what tools to invest in can make a huge difference. For example, when a customer needs a hole drilled through a 5-inch piece of steel. “It’s all about speeds and feeds,” he said.

The sheer range and scope of the work Davenport does keeps him on his toes creatively. “It can be anything and everything,” he said. Every job is drawn and proofed on a computer using Mastercam CAD/CAM soft- ware, and then machined. “Sometimes it takes longer to set a job up than to bore it,” Davenport admitted. He’s fashioned obsolete parts for old farm equipment and plows, as well as augers, axels, and plates for mobile homes. “We do a lot of ones, twos, and fives,” Davenport said, adding, “Big runs of unique parts have gone to China and Mexico.”

The Machine Shop does a lot of local work, but also competes with fabricators downstate and even as far away as Florida. Sometimes, even competitors turn into customers. “Not everyone has all the equipment necessary to do every job that might be out there,” Dan Jones explained. “And you have to get along with your competition because someday you might need them.” He pointed out that the give and take with other fabricators is something that helps them stay up to speed with industry advancements.

Jones added that an unexpected benefit of having the Machine Shop is that now Davenport can repair the company’s own equipment. It can make all the difference in production when it doesn’t take weeks to order a new part for a sophisticated piece of equipment from the manufacturer in Germany.

Jones said that eventually, the company would like to add more staff to the Machine Shop. “Our goal is to have all of the equipment in the shop running at the same time,” he said. Even in a day and age of sophisticated machine fabrication, there’s still a place for highly skilled craftspeople. “We have a lot of talented people who care about the product,” said Davenport.