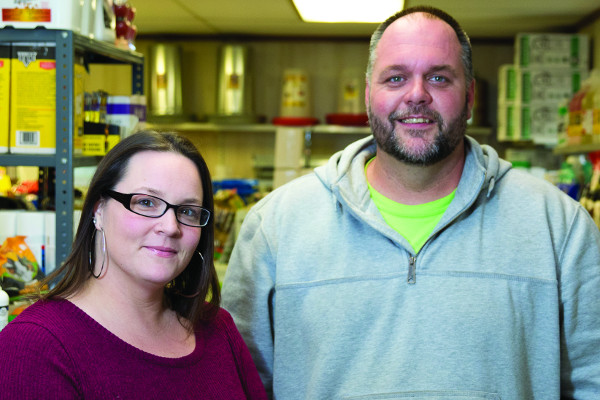 “Like most siblings, Rene and I sometimes fought as kids, but at the end of the day, I couldn’t do what she does,” said Rob Duprey, owner of Duprey’s Feed in Chazy. “We complement each other very well. We’re both particular about how things get done, and agree that it’s just as easy to do a good job as a bad job.”

“We keep work at work and home at home” said Rene, Rob’s younger sister and the manager of their thriving store. “On holidays, it’s all about family. We don’t talk shop at family events. As far as our work relationship goes, it’s all about mutual respect and treating someone as you want to be treated. You have to be able to talk. We don’t yell.”

Interviewed separately, both said that asking questions is their primary form of communication. It’s working. Now a second-generation business since Rob purchased the store from their father, Robert Duprey, Duprey’s Feed sales have increased by 50 percent over the last five years.

The History of Duprey’s Feed

Originally owned by Gordon Winterbottom, Duprey’s Feed—which was then named Winterbottom Feed and Trucking— started offering feed to dairy farmers from its Chazy location on Rt. 9 in the 1950s. Rob and Rene’s father began working here in 1970 as a 19-year-old. Over the next 30 years, this hard worker and quick study moved up to the position of store manager. When Winterbottom decided to retire in 2000, Robert Duprey purchased the business, and spent the next 12 years building it.

Rene began working with her father part-time during high school, and then full-time upon graduating from Northern Adirondack in 2002. “When I started, it was just about cleaning,” she admitted. “My dad needed the help. Over time, I found the customers to be awesome; they’re like family to us, and I loved the work.”

Older brother Rob, also a graduate of Northern Adirondack, had pursued courses in the school’s respected agricultural program and gained experience by working at local dairy farms before joining the family business in 2005. He purchased the business from their father in 2012.

“Dad wanted to retire when he was still young enough to travel and do other things,” said Rob. “Saying, ‘You can’t have two bosses,’ he gracefully stepped away from the business and doesn’t participate in day-to-day operations. He’s always there if we need advice, though. My father is the best businessman we’ve ever met.”

In addition to his father, Rob credited NAC teacher Homer Bushey as an instrumental influence. “He was like a second father to me. Not only did he teach me a lot about agriculture, but if I got a bad grade in another class, I heard about it first from him. He’s retired now, but he still comes into the store to purchase feed and share stories.”

Catering to the Backyard Farmer

Although their primary sales are feed for animals—from pets to dairy cattle, horses, swine, and birds (they sell 70 tons of pet food alone each year, and over 1000 tons of feed total)—Duprey’s has expanded its product line to include trees, shrubbery, mulch, and sand for landscaping; as well as wood pellets, gates, culvert pipe, and stock tanks; and shovels, forks, and brooms. The biggest shift they’ve seen in the last few years is the rise of the backyard farmer, a movement prompted by rising food costs and the desire by many for organic, high-quality food. According to a special National Gardening Association report, Garden to Table: A Five-Year Look at Food Gardening in America, during the past five years there’s been a significant upward shift in the number of Americans who grow their own food in home and community gardens—from 36 million households in 2008 to 42 million in 2013. That’s a 17 percent increase and represents the highest level of food gardening in more than a decade. The report showed that young people, particularly millennials (ages 18–34), are the fastest-growing population segment of food gardeners. In 2008 there were 8 million millennial food gardeners. That figure rose to 13 million in 2013. In addition, millennials also nearly doubled their spending on food gardening, from $632 million in 2008 to $1.2 billion in 2013. Many also keep chickens and raise their own meat. Due to this cultural shift, Duprey’s customers have expanded from dairy farmers to include the average homeowner.

“Backyard farming has really expanded over the years,” confirmed Rene. “In fact, we sell baby chicks in the spring.” “People are very concerned about what they’re eating,” added Rob. “We fit that niche very well.”

With a hands-on management style, Rob likes to oversee everything and he does the ordering and purchasing. Crediting his employees for their hard work and loyalty, Rob confirmed that they make his job easier. “Communication is key,” explained Rob. “I ask a million questions.”

Rene does the payroll, taxes, and bookkeeping, and answers the phone and cashes out the customers. All of their invoices are handwritten; taxes and billing are done that way, too. “We’re an old-fashioned business,” said Rene. “I like it that way, and our customers do too. It’s easier to catch mistakes and keeps that personal touch. It works for us.”

Due to the nature of retail, Rob and Rene are on duty six days a week unless one or the other needs a day off. According to Rob, “You’ve got to be willing to work a lot of hours and be a numbers person. It’s crucial to know your bottom line, know what your costs are. A certain feed can cost a certain amount, but how much is the freight to get it here?”

Support for the Local Community

The Dupreys are strong supporters of their local community, especially the churches, firehouses, and youth groups. (The day I visited, a sign for St. Ann’s Harvest Dinner was right out front of the business.) They sponsor a team in the Mooers Football (soccer) Club, coached by Chris Gonyo, a team on which Rob’s son plays.

To ensure that the next generation gets an agricultural education, Duprey’s also sponsors a Future Farmers of America (FFA) barn at the Clinton Country Fair. Rob’s son, a seventh grader, already works at the store, and his other son, as well as Rene’s two children, hope to work there when they are older.

What the Future Holds

“Our biggest challenge is competing with the box stores,” said Rob. “Our prices may not be quite as low as theirs, but they are competitive, and we offer personalized service. If you have a question about feeding a particular animal, we can answer it.”

“We’re committed to keeping our inventory fresh and current. We regularly stock new products, and get training on their benefits and how to sell them,” said Rene.

As for the future, Rob said, “We want to continue to grow this business at a sustainable rate. We’d like to get better, not bigger.”