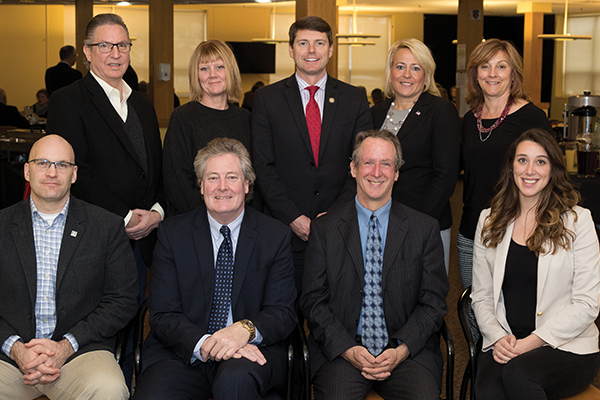 “Few things are harder to put up with than the annoyance of a good example,” said Garry Douglas, quoting Mark Twain at the 29th Strictly Business Forum. “We’ve become the masters of our fate developing tools and programs proactively,” Douglas continued. “At 3.4%, we have a lower unemployment rate than the national average. Through will and determination, we have international service at the airport. But success has its challenges.”

With representation from the government, construction, real estate, not-for-profits, manufacturing, hospitality, and the healthcare industries, the discussion at Table 2 celebrated the successes and shared the challenges of 2018. Overall, business was steady. All agreed our region offers everything anyone could want, especially for families, but work still needs to be done to cultivate and attract new residents, and offer existing ones reasons to stay. An aging workforce means that programs to train young people continue to need development and nurturing. Transportation and affordable housing are needed for current residents and those who move into the North Country. Outside of our area, the politics of 2018 made the cross-border relationship with Canada somewhat rocky. These challenges, however, are surmountable, and serve as a contrast to the myriad of successes.

With the 10-year renovation of the Strand Performing Arts Center nearly complete, downtown Plattsburgh is attracting world-class entertainment. The Dave Mason show was well attended, and there are already many exciting concerts and events scheduled for 2019. Spirit Airlines recently installed the first Norsk Titanium components on a Boeing 787 fuselage. Local elected officials are forging a better partnership between business and government, and working toward creative solutions to challenges of transportation in a rural area. The construction industry is booming, and an attractive option for those who want a rewarding job with a livable wage without the encumbrance of college debt. Healthcare is ever changing, but new centers opened, and more services are being provided. The hospitality industry is thriving, and local real estate is offering new listings every day. In short, there has never been a better time to do business in the North Country.

Alexandra Barie, Licensed Real Estate Agent, CDC Real Estate:
“NAFTA changes, and the political climate, caused a lull, and business started slowly in 2018, but it picked up during the last two quarters,” said Alexandra Barie. The second generation in CDC Real Estate, opened by her father in Rouses Point in 1981, Barie began with the firm in 2012.

“In the North Country, there are properties on both ends of the spectrum, but not a lot in the mid-range. This makes it a challenge for people to move into the area,” said Barie. Being a millennial herself, Barie appreciates what is being done to train and encourage young people. “Coryer Staffing’s RAMP program is doing a great job. The best way to increase the workforce is to grow our own. In addition, online marketing and social media connections eventually do matter. We must brand our area. Get the message out.”

Bob Garcia, Executive Director, The Strand Center for the Arts:
Taking the helm at the end of a decade-long restoration project, Garcia’s appointment in August 2018 makes him the first permanent director since 2015. Coming from New York City, Garcia began his career in 1981 at Radio City Music Hall Productions providing fiscal oversight. In 1988, he became vice-president of entertainment and finance for the Madison Square Garden company. This is his first not-for-profit theatre experience.

“It’s a gorgeous little theatre,” said Garcia. “The small size does present a challenge for attracting acts; however, the historic theatre was rebranded with a new name, logo, website and millions of dollars of newly installed equipment—giving it the ability to attract world-class performers. This year we will add signage and lights.”

Coming attractions to the theatre in 2019 include the Gibson Brothers, Pink Talking Fish, The Outlaws, and the Allman Betts Band as well as cultural films and local performances.

Billy Jones, Assemblyman, 115th District:
With his re-election in 2018 to geographically the third largest district in the state, Billy Jones puts in a lot of what he calls “windshield time.”

“Accessibility is a big thing,” said Jones. “Thankfully, I have an amazing staff (four people locally and two in Albany) who make it possible for me to focus. There are a lot of legislative issues to be worked on in 2019, but this year I got through six initiatives, including financing for the Quebec-NY corridor. Our relationship with our neighbors to the north is extremely important. Transportation in a rural area is a huge issue, coupled with a serious workforce shortage. Some companies are trying to provide transportation. Business needs a better partnership with government.”

Julie Kramer, Chief Operating Officer, Vice-President & CFO, Nine Platt Hospitality Group:
“Investing in your culture is the only way a business can survive and thrive. I want everyone, including our guests, to walk in our doors and feel the ‘culture’ of our friendly environment where they can see our staff is happy at their job,” said Julie Kramer.

Proud to be the oldest hotel property in Plattsburgh, the Best Western had a “stellar” summer in 2018. “Occupancy was up 2.6%,” said Kramer. “The Canadian exchange rate did not affect our business. Through effective marketing, we get higher-end tour groups, and our area is getting great exposure.

On the flip side, restaurant sales were rather flat, affected, as many chain restaurants are, by fast food growth. Staffing has also been an issue. “Our staff is aging,” said Kramer. “We have a lot of longevity, but it has been hard to get qualified, reliable help. To help remedy this, unlike most hospitality companies, we offer a generous benefit package: health insurance, 401K, and paid time off for jury duty, sick time, and vacation. We also have a sign-on bonus.”

Michelle LeBeau, President, University of Vermont Health Network:
As the first executive manager from the North Country and a former nurse, Michelle LeBeau understands North Country people. “Integrity is the quality most important for business success,” said LeBeau. “Our ability to lead and with that our collective success relies on others belief in us. We are asking our people to move quickly, to try new things and to follow us even when we aren’t sure where we are headed. “

LeBeau labels 2018 as an interesting year. “Health care reimbursement is changing and causing us to redesign the way we deliver care,” she said. “There were good opportunities, however, from a hiring perspective.”

LeBeau and her staff have a multi-faceted approach to hiring. “We do our hiring through assessments to ensure a cultural fit. Our employees must believe in the tenets of the organization. The staff, and not just the higher ups, do interviews. We also have an extensive orientation program,” she explained.

Scott McNulty, Site Manager and Director of Operations, Norsk Titanium:
Arriving at Norsk Titanium in September 2017—shortly before the Plattsburgh plant began running production—McNulty grew up in Malone and Morrisonville, earned a BS in Mechanical Engineering from Clarkson University and an MS from the University of Vermont. He most recently worked at United Technologies Aerospace Systems, a global aerospace and defense company, in Vergennes, VT.

“We doubled the head count at Norsk Titanium by 50% in 2018, going from 30 to 60 employees. Nearly three quarters of those employees were local,” said McNulty. “Norsk represents the future of North Country manufacturing. Our FAA approved manufacturing facility is very modern and clean. Twenty five percent of our workforce is women—high for a STEM/ Manufacturing business. We are partnering with CFES/Brilliant Pathways and Clinton Community College to help young people become interested in, and develop skills for, manufacturing. It is a lot easier to get people to stay in the area than to bring people in.”

Patrick Murnane, President, Murnane Building Contractors:
While still in high school in the mid-1970s, Patrick Murnane joined the family-owned business started by his father in 1956. Plattsburgh is the home of Murnane Building Contractors, but there are offices in Utica, Syracuse, and Clifton Park. Murnane employs 80 people in management and 300 other employees, including his two sons.

“My views on what constitutes business success have changed considerably over my forty-plus year career, so my algorithm to achieve success has also evolved. Today, my most valued quality is integrity: firm adherence to a code or standard of values,” said Murnane.

Recent projects include the Institute for Advance Manufacturing at Clinton Community College and the Hudson Headwaters Family Health Center in Champlain.

A trained workforce is a challenge in the construction industry. “We need to do a better job partnering with BOCES for certificate programs, and promoting women in nontraditional roles,” said Murnane. “Working with the colleges to keep people in the area and indoctrinating young people into leadership roles would also have an impact.”

Colin Read, Mayor, City of Plattsburgh:
When he began his four-year term in 2017, Read inherited significant challenges. When asked about 2018, Read quoted Charles Dickens: “It was the best of times, and the worst of times.”

“Just like everywhere else, rural cities are having a hard time surviving. Due to the aging population, and our demographics, 38% of our tax base is exempt from paying taxes. Last year, we lost 400 residents from the city—that’s 1.5-2% of our population. We have inexpensive power, but we don’t have any land. We’ve got no way to grow and expand our tax base. We’re at the tipping point with taxes. At the same time, rural cities have to service this large region.”

Read favors a merger with the Town of Plattsburgh. “Yes, I really believe in shared services, but change is difficult.”

Good broadband, public transportation and bike paths to minimize automobile usage, and more arts are some of Read’s ideas to minimize people leaving, and attract young families. “I think we can rise to the opportunity to be a young happening community,” said Read.

Moving Forward into 2019
In summary, integrity and trust are important values among members of Table 2. Attracting employees who are willing to accept change and challenge, and integrate into the corporate culture, is topmost on the business goals in 2019. Promoting the lifestyle the North Country offers will help keep our young people here where there are jobs available to satisfy every skill set. As we move forward, 2019 promises to be a pivotal year.