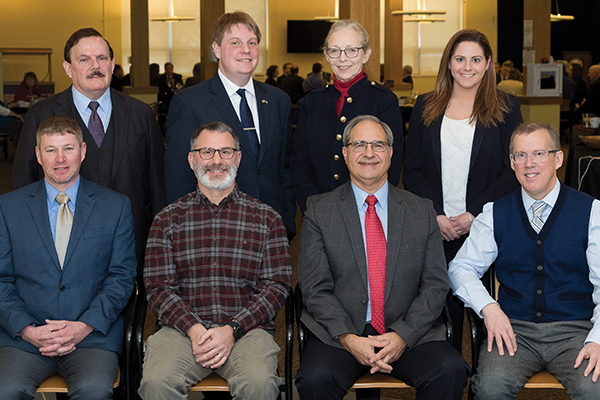 At Table Four, the 29th Strictly Business Forum brought together an eclectic mix of community, business, health care and education leaders. What they had in common was their passion for their work and appreciation for our area. Their shared successes and challenges led to a lively and insightful discussion.

Casey Kanclerz is the Vice President for Operations at Stewarts Shops. Based in Ballston Spa, New York, Stewarts is a third generation family business with 335 shops in 31 counties. In business for 75 years, Stewarts now employs 4,500 people and according to Kanclerz, in 2018 saw “another record year on top of last year which was also a record year especially in the North Country. We invested $50 million in upgrades, added three new stores and rebuilt more than twenty.”

In such a low-unemployment environment, Kanclerz is proud of what Stewarts is able to offer its employees, “We have a strong sense of ownership with our employees since over 40% of the company is owned by them. You can work four hours or 40 hours and be treated the same way. An employee who works more than 20 hours is part owner of the company which is true in the majority of our stores.”

For the past 30 years, Dan Alexander has been the publisher of Sun Community News and the owner and president of Denton Publications. The Sun is the largest free community newspaper in the region and is mailed to over 71,300 homes in Clinton, Essex, Franklin, Hamilton, and Warren Counties, reaching 99.1% of the homes in the area. Using an old phrase, Alexander described the present situation for his business as “the best of times and the worst of times this last year. We’ve seen some significant growth in the company especially up here in Clinton County but many of the smaller communities we serve in the Lake George, Glens Falls region and throughout the North Country are struggling. So many small businesses, family owned businesses are disappearing from the landscape. School populations are low, communities have empty buildings in them and that affects the way our business works.”

Alexander said new technology has provided some surprising challenges. “Just this last year we had a number of power outages that affected production.” Even though his company has struggled to keep the presses running and meet deadlines, Alexander still sees great potential for the future of Sun Community News in the region.

Dr. Kris Ambler has been practicing medicine in the North Country for over thirty years. A 1985 graduate of New York Medical College, Ambler’s specialty is internal medicine but his practice is wide ranging. He gives credit to his four medical providers and large support staff. “The office is a team effort,” he emphasized.

Ambler is also the president of the Northern New York Physicians Independent Practice Association (IPA) which has physicians in private practice in Clinton, Essex, Franklin and St Lawrence counties. An IPA can assist practices with a wide range of services such as nurse care management, data analytics, insurance contracting and other administrative services. In the changing healthcare arena, Ambler said, “Payment models are evolving from a fee-for-service structure to one where funding is increasingly linked to the quality of care and patient outcomes”. Examples include colonoscopy rates, vaccination rates and hospital readmission rates. Larger organizations and hospitals are more able to accommodate these requirements where smaller private practices have a harder time meeting the new regulatory needs — which is where the IPA helps. Advances in technology have helped but Ambler said, “Being a doctor is complex enough, added to that is the responsibility of running an increasingly complex business. An IPA can assist private physicians.”

Michael Cashman, supervisor of the Town of Plattsburgh, was elected to the position in 2015 at the age of 34. Cashman observed that the town saw another banner year in 2018 and because of that there is an emphasis on building infrastructure and perfecting public/private partnerships in order to support continued development. As an example he pointed to development at the old county airport on Route 3 and the town’s investment in healthy living by promoting the Saranac River Trail and the LaPierre Lane Riverway. With 60 plus employees, Cashman finds himself trying to retain them with better compensation packages instead of acting as a training ground for people looking to move to county and state level jobs.

Reflecting on his responsibilities as supervisor Cashman described its challenges, “Government is like a cruise ship on the open water. It’s so big and unwieldy that it is hard to make quick turns. There are constant transitions within boards, among elected officials and people across the region.” According to Cashman the town has been doing a good job understanding its responsibility not only to its physical infrastructure but to its human infrastructure as well. “We need to create and sustain relationships with lots of individuals.”

Jessy Jolicoeur is the owner and master brewer of Oval Craft Brewing housed in the old Plattsburgh firehouse on the south end of the US Oval on the former Plattsburgh Air Force Base. Jolicoeur started home brewing in 1997, took a few classes in brewing techniques and the brew business, and wondered whether his dream could be possible. Now two and a half years in, Jolicoeur has met his goal of a consistent product at a good price but with the jitters of starting a new business over, he now has a new problem. “The federal and state governments have been very good to the craft brewing industry up to now,” he explained. “Currently I’m required to use 20% New York ingredients. That changes to 60% next year and the year after that to 90%. That is significant for me because there are only about five strains of hops that grow well in the state and if I change over to those it would alter everything I make.”

McFarlin’s former jobs include labor relations specialist for the Capital Region BOCES and regional director for Congresswoman Elise Stefanik. While her main focus is bolstering economic development through business incentives, McFarlin is also concerned with employee retention and recruitment and can speak to those issues from her own experience. “Since moving to the North Country I have learned about the housing shortage and the availability of daycare,” she offered.

Garry Douglas, President and CEO of the North Country Chamber of Commerce, returned to his North Country roots 24 years ago after a long stint on the staff of Congressman Jerry Solomon. Over the last two decades, Douglas has built the Chamber into a 4,000 member organization that covers the counties of Clinton, Essex, Franklin, Hamilton, and part of Warren. Its effect is also felt across the border in Quebec. “The key is to find the right people and empower them. My team makes me look great. I don’t micromanage. Nothing is more important than your people and the other part is flexibility.”

Douglas was still shaking his head about President Trump’s remarks about Canada.“I am proud of the role our team played managing this area’s cross-border relationship with Quebec in particular, and Canada in general this past year during a historically challenging time. Who would have anticipated that we’d be in a virtual political war with our greatest economic partner? But we were, and so we became proactive in ways most of which were unseen but they got the spigot back on. When Canadian media were predicting that Canadians weren’t going to come the U.S. visitation and spending in this area actually grew.”

At Table four we began our discussion talking about everything from ice cream flavors and power outages to the weather and staffing difficulties. We then proceeded to talk about outdated perceptions of the Plattsburgh area, cross-border relationships and the importance of having a good team around you but underlying our entire conversation was a general concern about the shortage of labor and lack of housing — topics that impact businesses across our region and are expected to do so for the foreseeable future.