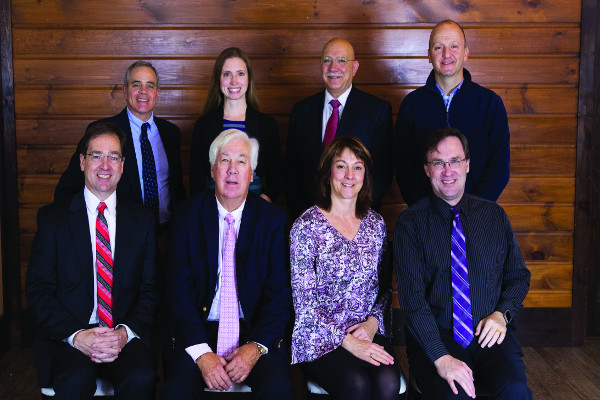 With representation from the financial, government, education, media, insurance, not-for-profit, and environmental industries, the discussion at Table Four during this 28th Strictly Business Forum was convivial, insightful, and stimulating. There was a shared sense of expectant optimism for the North Country’s economic future, and infectious energy among the participants.

While 2017 was not without challenges, these were met with clear- sighted professionalism and creativity. Attracting families and young adults to the North Country (and keeping them here) continues to be an important initiative. Workforce development is also a concern. With a population in flux, fewer people are out in the workforce, and a significant percentage need training. In addition, with a state assembly centered in Albany and focused on New York City, the political environment is not always conducive to being successful in our rural North Country. Transportation and affordable transitional housing must be increased in order to satisfy the needs of current residents and those who move into the North Country.

The development of Plattsburgh (which received a generous grant from the state last year) has been important in revitalizing the downtown. A portion of the grant went to improving the Strand Theatre—an enticement to young adults. Speaking of grants, the state also gave $38 million to develop the industrial potential of the Plattsburgh Airport and implement a federal inspection station that will allow passengers to leave for, and return from, international flights. The opening of Norsk Titanium and the new Institute for Advanced Manufacturing (IAM) training programs at Clinton Community College, a thriving environmental business, community support in the media, old-fashioned banking and insurance, as well as help for those who face financial challenges all contribute to a business environment that is striding with quiet confidence into 2018.

“Being able to make a difference and an impact is a privilege,” said John Bernardi, CEO of the United Way of the Adirondack Region. “Although it is challenging—like any other job should be—it is a lot of fun. Relevance is what I think about every day. I measure our success on that.”

Working in the human services field for 30 years, Bernardi has a strong grip on the pulse of North Country residents. Adjusting with new initiatives, such as the ALICE (Asset Limited, Income Constrained, Employed) project, and resurrecting old ones, such as the Wheels to Work program, allows Bernardi and the United Way to continue to meet the needs of its constituents.

“The United Way fared well this past year. More people are reaching out to us for help,” explained Bernardi. “We provided service to 80,000 people, which is half the population in our region. Our ongoing challenge is fundraising. The United Way must raise nearly $1 million each year—we’re very grateful for the contributions of our community—and there is an urgent need for foster care as well,” he said.

Functioning as a region, and not individual towns, makes the United Way more effective. “What happens in Ticonderoga affects Saranac Lake. We’ve begun to act like a region, and we need to grow as a region. There’s merit in doing so,” said Bernardi.

Like local banks, national direct insurance writers are competing with independent agencies. In addition, insurance is highly regulated, and some regulations have strict deadlines. Smaller agencies may struggle to find the resources to comply. For example, with recent breaches in Equifax and Target, cybersecurity regulations have become more crucial and more stringent. Fortunately, Agency Insurance Brokers is in a position where it has the loyal customer base and resources to face these challenges.

DeLaura’s biggest challenge this year has been staffing. “We do not get the response to open positions that we used to,” she explained. “We have begun to recruit people through staffing agencies, and do more internal training.”

DiPasquale supervises buildings, facilities, and 300 employees, as well as overseeing the education of 4,000 students each year. The past year, however, has not been without its challenges.

“When I came on board, we faced the lowest enrollment and a budget deficit,” DiPasquale explained. “Now we’re fixing problems, begin- ning to get the college on track, and seeing signs of higher student enrollment.” The opening of the ground-breaking, $13 million Institute for Advanced Manufacturing (IAM), the popularity of the wind power program (there are only three colleges in the Northeast that offer it, and European companies have come to campus to hire trained workers), and a move into training for the drone industry are part of the college’s enhanced curriculum.

In addition, DiPasquale periodically invites local businesses to his Business on the Bluff program, intended as a catalyst to bring area businesses together and plan for the future. Explained DiPasquale: “We ask the businesses, ‘How many workers will you need, and what training must they have?’ With a plan in place, CCC can make sure it provides the education.”

DiPasquale also credited the financial support of the county and the state. “The challenges are many but the support is there,” he said.

A significant cause of anxiety this year was the impact the dismantling of the Affordable Care Act (ACA) would have on Clinton County. “We are very concerned,” disclosed McManus. “It would cost the county $1.7 million to insure those who lose healthcare coverage. We have to be very mindful of what happens at the federal level.”

Among many initiatives, the County Legislature is working to get another airline— one that will allow Plattsburgh departures to multiple destinations—into Plattsburgh International Airport. McManus and the county legislature also hope to get additional funding to build a hotel. “We are optimistic that funding streams will be available for this development,” said McManus.

Before accepting the position of president and CEO in March 2017, McColgan spent two years as director of production and content, and has spent his career in television and media management. He currently supervises 14 full-time employees and one part-timer.

This past year, due to the new presidential administration, PBS faced a very real threat to its funding; however, explained McColgan, it’s not a controversy to support PBS. “National research shows that a large majority of Americans favor maintaining or increasing funding for public broadcasting, including some 66 percent of Republican voters. We have been grateful to receive broad bi-partisan support in Washington, including from our delegation. It’s important that we continue to actively engage with the communities we serve, and ensure that we focus on what’s important to them,” he said.

Bill Meyers, General Manager, Casella Waste
“I oversee the entire hauling (vehicle maintenance, marketing) division,” explained Bill Meyers, general manager of Casella Waste. A native of Pittsburgh, Meyers has 23 years in the waste management business—14 with Casella. He supervises 43 employees who work in a territory that covers Clinton, Essex, and the southern half of Franklin County.

Meyers said that 2017 was a very positive year. “We have reached 11,000 customers—a significant milestone for us—and will have gone 1,000 days without a lost time injury as of January 2018. Our Zero Sort recycling program instituted in 2010 widened what customers can recycle and has made recycling easier. Also, technology continues to get better. We now have an automated arm on all of our residential trucks, minimizing the number of times drivers need to get out of the truck and increasing our efficiency servicing our customers.”

With the continued integration of automated equipment, Meyers and Casella Waste can meet the increased demand for recycling while continuing to keep their employees safe.

Thomas J. Murphy, President and CEO, Glens Falls National
“The financial business is doing well,” said Tom Murphy, president and CEO of Glens Falls National Bank. “We are cautiously optimistic.” The effects of the 2008–09 financial crisis continue to hobble the community banking industry through rules and regulations that were geared for larger banks. This has a negative impact on the services a community bank can offer, and has made it harder for smaller banks to keep branches open in small towns. “Thirty years ago there were 18,000 banks across the U.S.; now there are 6,000,” explained Murphy. “For a three-year period just recently ended, no new banks have been formed.”

Glens Falls National Bank has 30 branches and its sister bank, Saratoga National Bank, has another 10 branches. Together, the Arrow Team of over 530 employees continues to meet the growing needs of a clientele that ranges from high schoolers to senior citizens in a geography stretching up and down the Northway, covering small cities and rural communities. This provides a challenge the company has met for over 165 years. “My job is easy because every- one does their job,” said Murphy. “We have a great team, and we provide good service in a myriad of ways—teller transactions, online, ATM, and through mobile devices.”

Meeting the increased technology demands of their customers and staffing needs continue to be challenges. According to Murphy, “While better technology may mean fewer people are needed, the supply of people with the skill sets needed is limited—and convincing them to move here can be a challenge. Once they’re here, they love it. However we have to get them to give it a try.”