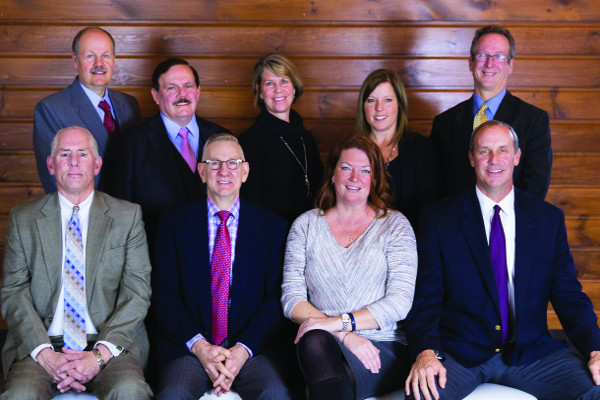 On the first Wednesday in December, I had the good fortune of sitting among some of the business decision-makers of the North Country. This year there was a focus on best practices with reference to employee retention, promoting awareness of area business advocacy programs, and rethinking what success looks like—not only as individuals but as a community. The SB Forum is proud to facilitate this opportunity for area leaders to talk about the state of business in the North Country. The event not only provided an opportunity to look back at 2017, but also a chance to look forward to the upcoming year, share anticipated challenges, and forecast goals. The year 2017 marked the 28th year Strictly Business has hosted the dialogue. That said, it is area businesses that are the Forum’s life’s blood; absent a panel, we couldn’t have a discussion.

All’s Well That Ends Well
Elizabeth Goerlitz-Coryer founded Coryer Staffing with her husband David a year and a half ago. “2017 was our first full year in business and we were very fortunate to have experienced phenomenal growth. Since June alone we’ve seen a 600 percent growth in candidate traffic,” she shared.

Global Sugar Art was not spared from the self-described industry slump at the start of the calendar year, but Alan Tetreault said, “We’ve been selling on Amazon.com for five or six years now. In June we onboarded with eBay, we are currently onboarding with Walmart. com, and are slated to onboard with Etsy in January or February of 2018. The results have been outstanding. October was our second-highest month in 2017 and the fourth quarter is setting up to be our strongest of the year.”

Brian Gladwin shared that NBT Bancorp reported record levels of net income and earnings per share for the third quarter ending September 30, 2017, and that they have had another successful year in the North Country. He also shared that NBT continues to be invested in the Plattsburgh area, and they’ve recently completed extensive renovations for a new “digital branch” on Margaret Street, co-located with its insurance company, NBT-Mang Insurance Agency. The new location has a modern, open floor plan and new digital features.

The celebration of achievements didn’t stop when Deena Giltz McCullough spoke. She shared that the New York State Society for Human Resource Management placed Northern Insuring in its Top Ten of the state’s best places to work. Northern Insuring is expanding into St. Lawrence County, opening a branch in Potsdam. The company is also growing here in Plattsburgh with the addition of a fourth generation to the team: Giltz McCullough’s son, Collin.

Mayor Read shared that he considers the scope of his position both regionally and nationally. “We’ve got a strong regional footprint. We are the only city within about 100 miles in New York State; as such we are serving Essex, Franklin, and Clinton Counties. We need to make sure we are competitive nationally,” he said. “Nowadays, people can pretty much live anywhere they want. We need to make sure as a city we are competitive with cities like Boulder, Colorado; Austin, Texas; and Eugene, Oregon. Being nationally competitive is essential for a small city like ours to survive.”

Due mainly to employee growth to match an increase in production demands, John Vermette stated that SpencerARL will end 2017 a little battle worn, but on a positive note.

Fesette Realty also had a good year. Neil Fesette detailed that the company lagged a little bit in comparison to last year—the biggest problem being inventory. Overall, Fesette described 2017 as a solid year. “We’ve got the residential brokerage, commercial brokerage, a pretty substantive real estate management company, and a development side to the company, so the overall takeaway is a solid year with a good feeling going into 2018,” he said.

Strategies and Directions
Some of the most engaging aspects of Table Three’s discussion centered around the area’s best resource: its residents. With unemployment at 4.6 percent, growing area businesses are dealing with the mixed blessing of an employee shortage, and the business leaders at the table have been meeting that challenge with a variety of different approaches.

Elizabeth Goerlitz-Coryer was eager to share that Coryer Staffing has been going into area schools and doing “interviews” with the students to engage them on best practices and why they are important. “The early introduction of employment placement services is essential to letting the students know about us before they need us,” she said. “And the feedback has been really positive,” she added.

The North Country Chamber of Commerce’s Garry Douglas challenged area businesses to be more empathetic employers. “The best way to recruit is to retain,” he said. “We have a wealth of resources, among them the Regional Economic Development Council, the Institute for Advanced Manufacturing, and The Development Corporation, to name a few—programs that are unique to our area and assist with [recruiting and retention]. We really need area employers to use them.”

Global Sugar Art’s Alan Tetreault subscribed to Douglas’s initial assertion, saying that the company doesn’t risk losing employees over a minimal raise. “Our pick and pack employees are essential to the success of our business,” said Tetreault. “If—30 days after they start working for us—someone establishes themselves as the kind of employee we are looking for, I will reward that with a significant bump in their wage. Other raises after that will be incremental, but employees need a livable wage to stay with your company.”

Deena Giltz McCullough shared that remaining in dialogue with employees works to help foster that mutual understanding that is integral to retention. Northern Insuring offers its employees a vacation bonus that is calibrated on years of service—something her grand- father instituted. Additionally she shared, “You can’t underestimate the importance of a corporate culture. We have something we call a ‘New Employee First Week Experience,’ wherein they get to know all departments within the company. It includes reading a book called Crucial Conversations… That’s part of what we are all about.”

According to Mayor Read, employee retention has never been that big an issue for the city. “We are not in the market of competing for employees; we are competing for residents and we really need our employees to act as ambassadors in that capacity,” he said.
John Vermette was particularly interested in this portion of the discussion, having tried a couple of different incentives with SpencerARL employees with only tepid results. “We’ve tried sign-on bonuses, stay bonuses, and referral bonuses; now we are considering taking more permanent steps with our benefit package,” he said. These steps would help SpencerARL to better establish itself as a more attractive and competitive company in the North Country. Vermette was candid and humble in crediting Garry Douglas for some “tough love” earlier in the year when he related how Douglas challenged SpencerARL to be a more attractive employer. Vermette embraced the idea that adding value to the company’s employees adds value to the company.

Fesette shared that half of his employees are independent contractors, which insulated him from some of the discussion. However, he did feel the impact with tradespeople. “My strategy is to figure out what they are worth and pay them a little bit more, and then pro- vide perks. I don’t think I’ve ever said no to someone asking to take the day off,” he said.

Recruiting new residents to the North Country seemed tied to the value assessed to the down- town area. Goerlitz-Coryer shared that an attractive downtown could be defined by appropriate housing for young professionals close to downtown, more diverse restaurants, and better, more efficient public transportation. “We are doing our best to meet the demand and staff these companies with second and third shifts, and it can be really challenging for workers to actually get to work as public transportation largely exists only during first/day shift,” she said.

Douglas took the opportunity to reiterate what might be a misconception regarding the Downtown Revitalization Initiative (DRI). He explained that the DRI award was based on potential related to human capital, not need. “The vibrancy of our downtown is integral to the success of the region, not just the City of Plattsburgh,” said Douglas.

Giltz McCullough is proud of the North Country and operates with the hope of infecting others with that pride. She would like area leaders to continue to challenge the cultural acceptance of residing in Plattsburgh as being a resignation, rather than a destination.

Mayor Read cited the fragmentation of New York State in part when challenging the concept of separating city residents and their concerns from area or regional concerns. “I came to this area about 12 years ago for the potential that is here. I’d like to say we’ve realized that potential, but we are still working on it. The hard reality for our city is that it is not becoming any more fiscally valuable. We have to figure out a way to create more of an opportunity for the city to be more viable and it’s not just a city resident problem. Given the importance of a vibrant downtown to the area, we need to develop more regional thinking,” said Read.

Living Forward as a Community
While the business leaders at the table offered a variety of ideas for mapping business success, none were mutually exclusive. Deena Giltz McCullough offered one word: agility. “Things change all the time and you need to be prepared to handle it. If you can’t deliver change, you’re going to have a problem,” she said. Mayor Read countered, “Or, if you do deliver change, you’re going to have a problem. As a region, we need to look at the equation of vibrancy versus sustainability.”

Others had more concrete advice, such as keeping an eye on the future with a wide angle lens, acknowledging the importance of customer service, and—certainly never to be overlooked—the real-time knowledge of your cash flow.

One of the unifying discussion points was the concept of living the future—the idea of making plans based not on where you are now as a business, but on where you would like to be in five, 10, or 20 years and setting up a model that can be sustained or can withstand the inevitable change that comes with time.

In embracing the idea of living forward, Garry Douglas said he would like community and business leaders to see a difference between expenses and investments, challenges and concerns. Mayor Read expressed the importance of a more regional way of thinking as integral to the success of not only the City of Plattsburgh, but also the North Country community.

Finally, Douglas shared the words of Winston Churchill: “There are two kinds of success— initial and ultimate.” Being a part of engaging area business leaders in discussion about the state of the North Country is the kind of initial step that sets us all up for ultimate success.