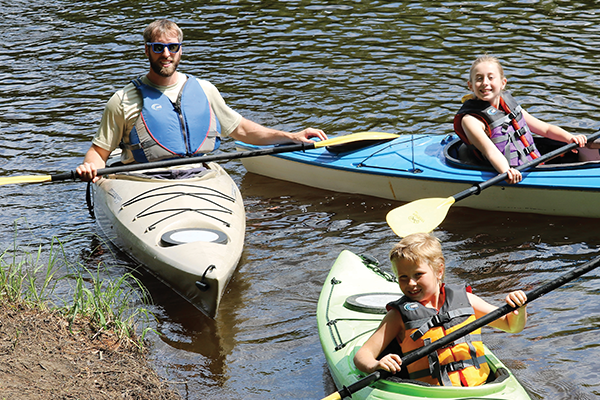 Like the proverbial question, ‘If a tree falls in the woods…’ Adirondack River Rentals at Baggs’ Landing off Route 9 north of Keeseville, New York begs the question, “If there is no physical building that opens with a key, is it really a ‘turnkey’ operation?” New owner and partner Greg Johnson would answer an enthusiastic “Yes!”

Johnson grew up in Peru, New York and worked for Kayak Shack owners Patty and Dave Husband during high school and summer vacations while he earned his B.S. from SUNY Plattsburgh. He spent time at both their retail location on Route 3 and the kayak, canoe and paddleboard rental location on Route 9. Johnson was no stranger on the river and the lake even before getting the best summer job ever. “I was fortunate enough to grow up right on Lake Champlain across from the southern tip of Valcour Island so paddle sports, boating, and camping on Valcour have always been pastimes of mine.”

After graduating from SUNY in 2014, Johnson went on to complete an MBA in Sports and Athletics Administration from Lynn University in Boca Raton, Florida. Then it was back to the North Country to regroup and see where his next step would take him.

The Husbands were looking to retire from the kayak sales and rental business and discussions soon began. “We had a conversation for a year before we finalized the details,” Johnson explained. “Patty wanted to see the business go to somebody they knew.”

As a manager and an employee, and armed with an MBA to boot, Johnson knew just about everything he needed to take care of the business. On June 1st, he and childhood friend, Abe Munn, became the owners of the rental business, renaming it Adirondack River Rentals (ARR).

“It has been a good transition, even with the shaky weather in early June” Johnson offered. The location at Baggs’ Landing currently bears the Kayak Shack sign out on Route 9, with a kayak hoisted on top to get the point across. The new Adirondack River Rentals sign will go up once it is approved by the Town of Peru.

While the southern bank of the river is private property, the north shore is where ARR operates. A pop-up canopy and a cell phone with a Square attachment to take credit cards are Johnson’s office on location, along with a container full of boats, life jackets and paddles.

Available for rent at ARR are single and tandem kayaks, stand up paddleboards (SUPs), and canoes. A life preserver, paddle and basic instructions are included. Renters are required to sign a waiver before taking a boat out.

“People can enjoy a 30–40-minute paddle out to Ausable Point Beach,” said Johnson. “They can also go out on the lake in the longest boat we offer which is 15 feet.” And for renters who have their eye on another location for paddling, ARR offers a car topping service, where they load boats on top of vehicles using straps and foam blocks.

The skill level of customers ranges from beginners to seasoned kayakers, and locals who just enjoy the river. There are no rapids so paddlers can be assured a smooth ride. “Some people bring their own kayaks, knowing that for a small fee they can park their car and put in at this location which gives them access to the river,” Johnson offered. Complimentary sunscreen, bug spray and an on-site ‘porta potty’ are offered for those who may not have planned ahead.

Johnson juggles his commitment to Adirondack River Rentals with a four day a week job as the Fitness Coordinator at CVPH Wellness Center on New York Road in Plattsburgh. Munn can be found manning the operation in his absence. “We definitely need two people on the weekends,” Johnson observed. “It can get pretty hectic. Each day is a little different, some days all the canoes are out, some days the SUPs are all out.”

The partners have been surprised by how many visitors to the area come looking for ARR. “People from all over the world have stopped by,” Johnson said. “We have had customers from around New York State, soul searchers from California, a couple from Germany as well as others from across Europe.”

The vibe at ARR is laid back. “We enjoy hav – ing friends come and hang out. We are dog friendly and family friendly. In the evening we make a fire,” said Johnson. “We get a lot of people asking for suggestions for places to eat and drink in the area. We send them to our buddies at Ausable Brewing Company and Livingoods Restaurant and Brewery. If we can give another local some business, we do it.”

Special events at ARR include Family Night on Wednesdays and Happy Hour Paddle on Thursdays.

In recent years, Johnson was part of a river clean up where individuals volunteered their time and used Kayak Shack vessels to clean up debris, mostly tires, from the water. “We would pull roughly 200 tires per cleanup,” he said. His plan is for Adirondack River Rentals to participate in similar environ – mental cleanup projects going forward.

Additional offerings are in the works. “We hope to hire kayak instructors and also offer a fitness class for the SUPs,” said Johnson. “We are going to run a kid’s camp this summer as well. Our season will run into mid-October, depending on the water temperature.

KEEP CALM AND KAYAK ON

As a seasoned kayaker, Johnson’s choice for putting in on the river is a single, sit in kayak. With an office on the banks of the Ausable River, a job that keeps him outside and his best friend as a partner, life is good.

“It’s a great business. There is a lot that goes into it like any business but as far as procedures go, it’s pretty smooth,” he said. “Everything happened with perfect timing. We are excited to start this. It’s a new venture but it has a familiar feel to it. Business in the front and a party in the back.” Looking out at the calm river, Johnson said, “It’s not a bad office.”