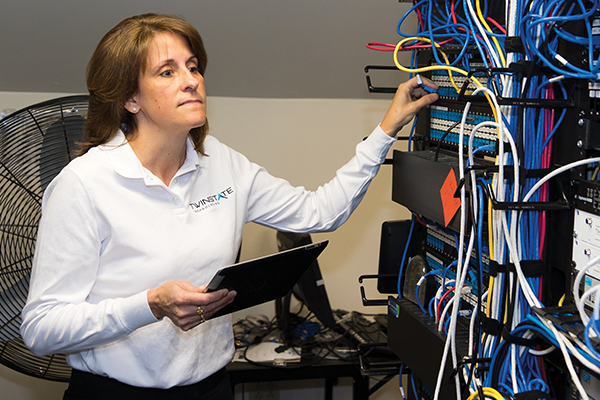 Judy Lemza believes that you need a good foundation to meet your goals, whether they are academic or made of real concrete. In her case, the foundations she’s concerned with support not a structure but its communications infrastructure: cabling, switches, software and hardware. Unless that infrastructure is well designed and properly constructed, there will be problems and unnecessary costs in the future.

Lemza’s education provided her with the foundational knowledge to succeed in the rapidly evolving world of communications. She studied computer programming and majored in electronic telecommunications. In order to stay abreast of developments in her field, she takes the equivalent of one college semester’s work every year.

Lemza is a native of Moriah, New York in Essex County and still has family there. She graduated from Moriah High School and, like a lot of young people, wanted new experiences. “I was not moving back after graduation,” Lemza said. She attended the State University of New York at Cobleskill, where she studied computer programming in a two-year program. She was the only female in the major. She freely admits to not enjoying that study area but said it taught her to be methodical, to do things in the proper order, which has been useful to her throughout her career. “Even though I didn’t like it, I’m glad I did it,” she said.

After graduation in 1986, she attended the SUNY Institute of Technology in Utica, New York, which today is known as the SUNY Polytechnic Institute. There she majored in Electronic Communications, at the time it was the only such course of study offered in the United States. Her classwork included statistics, advanced physics, electrical engineering, and advanced calculus. She earned a Bachelor’s degree in 1990. Again, she was the only woman in her class but she recalled no gender bias from classmates or professors. “We were all in it together,” she said.

When it was time to look for a job a friend told her about Twinstate Technologies headquartered in Morrisonville and suggested she apply. Fresh out of college she landed a job working as a technician, primarily installing fiber optic cable. One day she was working down in a manhole on the Plattsburgh State campus pulling cable, when a distracted driver broke through the barricade around the manhole and dropped a rear tire just over Lemza’s head. The tire spun, Lemza screamed and co-workers quickly lifted the car out of the way.

After a year in the field installing and repairing telephone systems and training customers in their use, Lemza moved to the help desk to provide customer assistance. Although she still harbored thoughts of moving out of her native North Country, she noticed that whenever she came down with a case of wanderlust, Twinstate would offer her jobs with more complexity and responsibility. When voice mail was new, the company paid for her to become a certified voicemail installer. Lemza noted Twinstate is unusually helpful, supporting employees to get necessary certifications and training, comparable to what companies like Microsoft and Sysco require.

Along the way she became a Project Management Professional (PMP), a well-regarded designation, which requires certificate holders to pass a grueling four-hour exam. The classes are online while the tests are administered at a testing center. Maintaining her certifications is why she takes a college semester’s worth of work each year.

In addition, Lemza attends three to four technology conferences annually to keep up with the latest ideas and developments. While 95% of conference attendees are men, she has seen an increase in the number of women in management positions but in technical jobs it’s still almost all males.

When one of Twinstate’s owners took maternity leave Lemza was asked to fill in for her. That meant she was designing whole communications systems for customers, a job she has held for the past 12 years. Typically, a customer, which could be a business or governmental entity, approaches Twinstate looking for help setting up a computer and communications network. A sales person goes out to the site and reviews various options. Lemza then gets the blueprints or plans and figures out how to best meet the customer’s needs. She finds that architects don’t always plan for a communications network and just as often customers themselves are unsure of what they really need for now and in the future. Lemza uses her experience and up to date training to identify problems and develop solutions. One recent project she worked on was the merger of the Elizabethtown Community Hospital and the University of Vermont Health Network. The Elizabethtown hospital has seven outlying clinics scattered across Essex County from Ticonderoga to Wilmington, and all needed to be tied into the central hospital and then to the Champlain Valley Physicians Hospital in Plattsburgh, also part of UVM’s medical system.

Like many carpenters and builders, Lemza prefers working on designing for new buildings, but will happily accept work involving additions to existing buildings. When she first started designing, she worked alone, but now has four assistants who specialize in various aspects of design. As she and her team know well, foundations come first.