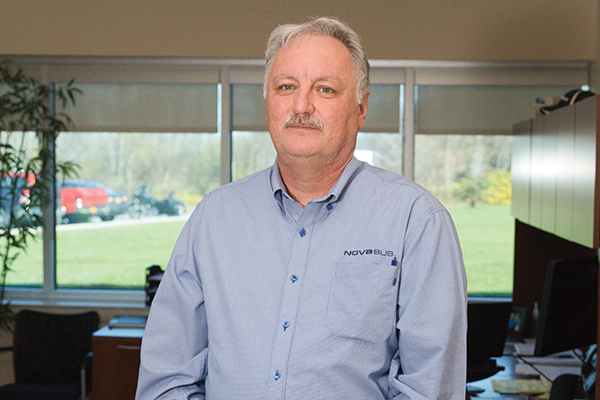 Not many people realize (know) that Nova Bus’s Plattsburgh plant includes two different assembly lines. Built in 2009, the plant includes a Nova bus assembly line and a Prevost line. Both turn out buses that take people places but they produce two entirely different products. The Nova side of the plant assembles transit or city buses and the Prevost side assembles commuter buses which are made for longer routes and come with luggage compartments underneath the coach.

Nova and Prevost are subsidiaries of Volvo North America, headquartered in Quebec. For Volvo, Plattsburgh is an ideal location because it is close to their other plants in Canada but meets federally mandated U.S. standards. Plant General Manager Greg Cody explained, “You can’t build a bus in Canada (for the U.S. market). One of the reasons to have this plant here is because Nova needs to meet “Buy America” requirements.” Another reason is the region’s linked hub created by the manufacturing base concentrated on transportation. The Plattsburgh area has become a mecca for suppliers and all kinds of small companies who support the needs of large companies such as Nova and Bombardier.

Located on Banker Road, the Nova side of the plant takes up 110,000 square feet, the Prevost side 26,000. The view of the Nova assembly line is overwhelming with some 30 buses in various stages of production. The bus industry is unlike the auto industry where one assembly line produces 1000’s of the same model. The bus market requires smaller numbers with different layouts and options. According to Cody, Nova’s and Prevost’s solution is flexibility on the plant floor, “The plant is set up to be able to interchange buses. We can build four or five of one bus and then switch to another bus with the next cycle. That allows us to build a prototype bus for a customer and then the very next bus we put down would be another contract with different options. It’s a very flexible plant. We may slow our clock down a little bit because there is a learning curve but other than that there is not a lot to a changeover.”

On the Nova line, twenty-one assembly workstations and eight finishing stations build each stainless-steel bus to individual specifications. The line also produces several different types of buses from diesel and hybrid to electric, compressed natural gas, and articulated (picture two buses 60 feet long attached by an accordion middle). “We have all these different options so going from a diesel bus to a CNG (compressed natural gas) bus is an option for us. It’s already planned, it’s already industrialized. So, for us it’s just picking the lever and turning a switch and you get that bus with that option. It’s got different fuel tanks because it has different fuel, components are different – different engines but built the same way. That’s the advantage of having a platform with all these major options even for our 60-foot bus. It goes down the same line but as two pieces. Kind of amazing you can build one bus one day and have a totally different bus the next.”

Between Canada and the U.S., 1000 of these vehicles come off the line each year, about 20% of the North American market. Prevost produces 200 a year or 32% of the market. The Plattsburgh plant includes a giant showroom where transit commuter company officials from all over inspect their final product and take delivery. Cody beamed as he listed them, “On the Nova side there is New York City, Buffalo, Rochester, and Chicago. We just got an order for Portland, Oregon. Then there is Houston, San Antonio, San Juan, Halifax, Calgary. It’s a huge list—big cities, small ones.

Formed in 1993, Nova Bus is a relatively new company, whereas Prevost has been around for about 95 years and is considered the premier producer in its category. Indeed, the White House has a Prevost coach, as do a number of celebrities. If you are a top rock group, you probably want the best custom road bus you can buy. That is when you get in line for a Prevost custom bus with a price tag of a million plus. Nova, on the other hand, answers to the needs of more common people and was formed at a time when the transit industry was reacting to new requirements created by the Americans with Disabilities Act to help formerly incapacitated people move more easily. City or transit buses responded to the challenge by lowering their floors and after a few hiccups, Nova was one of the first in the market place in 1996.

Built to last twelve to fifteen years, Cody says their products have a great reputation for durability, “The reliability of Prevost is second to none. Same on the Nova side. Once they are in service, they don’t break down all the time. The stainless-steel structure prevents corrosion.” Cody pointed out that durability, whether in the cold of Calgary or the heat of San Juan, is an all-important commodity in his industry, “When your bus isn’t in service, your bus isn’t generating income for the transit authority or taking people —the riding public—to their destination. When you go to work every day, you want to know the bus is going to show up. You want to know it is going to be there.“

The other important commodity in a world increasingly affected by a changing climate is systems that reduce greenhouse gas emissions. Nova and Prevost have been lauded for their environmentally friendly designs and practices. The plant, itself, is carbon neutral and 99% landfill free. According to Cody, everything in the plant except for some food waste is recycled. Also, buses by their nature are an environmentally friendly alternative.

Nova likes to point out that a single bus is the equivalent of fifty cars. That means that when you add up all the buses on the road, there are 625,000 fewer cars.

With almost thirty years in the transportation industry, Greg Cody says the local workforce is second to none. He also appreciates Volvo’s (and therefore Nova’s and Prevost’s) emphasis on people. “The company is very people oriented. We care about our people and try to take care of them the best we can.”