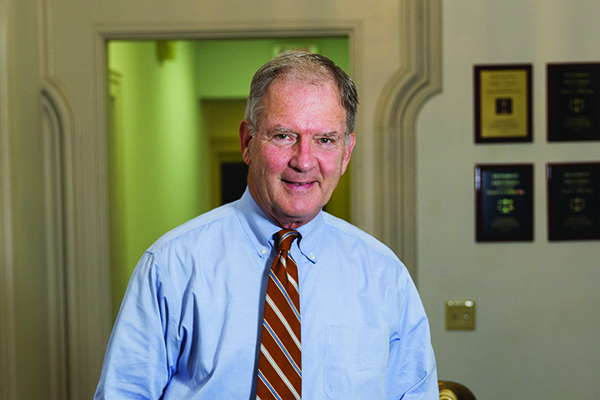 Business activity along the New York-Quebec corridor has come a long way since the early days of fur trading up and down the waterways of the St. Lawrence and Hudson Rivers. A perfect storm of economic temptation has steadily increased Canadian interest in the U.S. market throughout the past 30 years, and northern New York has been wildly successful at rising to meet the changing demands.

According to Bill Owens, senior partner and co-managing partner of Stafford Owens, and former member of Congress, this success was no accident. Prior to the mid 1980s there was not much going on in terms of U.S.-Canada economic relations. Owens and a small group of local businessmen including Pat Russell, the late Jim Abbott, Mark Barrie, and Bob Frenyea had the foresight to see this missed opportunity and began exploring ways to increase U.S.-Canadian trade for the benefit of our community.

“You have Canadian tourism here that has existed for at least 100 years,” Owens explained. “We talk to many Canadians who are in my generation who tell us they remember coming down to Plattsburgh City Beach as kids.” If they feel welcome while they are visiting and leave with an impression of the area as a nice, friendly place, they are more likely to return—for business or pleasure. According to Owens, this process has accelerated in part because of Garry Douglas. “Garry and his team at the Chamber of Commerce have done a phenomenal job positioning the region as a strong competitor for the Canadian market,” he said. Owens sat down with Strictly Business to discuss crossborder economics and share some best practices for tapping into the opportunities at the doorstep of local businesses in all areas of industry.

What Attracts Canadian Companies to the Region?
Between Bombardier, Nova Bus, and their vendors, it is clear to the layperson that Canadian companies find value in having a physical presence in the United States. In order to continue to draw them here, it is important to understand both the reasons they choose to come here, and also why they stay. Successful businesses rarely operate in a vacuum and they depend on outside entities to supply supportive goods and services. This means that there are ample opportunities for area entrepreneurs and businesses to become an integral part of the success of Canadian businesses operating locally.

The U.S.-Canadian border is an influential cross-continental force that offers countless options to Canadian companies that require access to the U.S. market. According to Owens, the number of crossings at the Quebec-New York border is among the highest in the country. “When you look at the border statistics—both people and goods—Plattsburgh would certainly rank in the top three to five [border crossing locations],” he explained. Among the top contenders, Plattsburgh is one of the smallest, yet it ranks among larger communities such as Buffalo, NY; Detroit, MI; and Blaine, WA. Here are some of the reasons we are such a force to be reckoned with:

Overhead Cost Savings
Relative to costs in Canada, land, electricity, and even labor costs are generally less expensive in this part of the United States. Over the past 30 years this was a catalyst contributing to the growth of Canadian companies building physical plants here. Owens added that importing finished products from outside NAFTA countries can incur much higher duty taxes for a business than importing the same product components in raw material form. Savvy companies can realize significant cost savings by moving their assembly process into the United States.

Government Trade Agreements
Legislation around international trade such as NAFTA and CAFTA gave cross-border trade a few healthy shots in the arm over the past few decades. These incentives gave rise to distribution and pickand-pack operations and helped fuel the growth of the warehouse industry locally. More recently, legislation within the “Made in America” and “Made in New York” regulations added new requirements to increase the amount of New York- and American-made raw materials and production that companies are required to incorporate in their goods in the United States. Compliance is an important precursor for access to significant financial incentives such as federal funding and exposure to municipalities in need of big ticket items like rail cars and buses. This represents not only a business opportunity, but also a responsibility for New York businesses to meet the supply demands of these Canadian companies to ensure that they can continue to do business here.

Marketing a U.S. Address
Canadian companies looking for a U.S. presence often find that disclosing their Canadian roots often inhibits sales to U.S. customers. The fears include not being able to easily return an item, and having troubles getting it across the border. The problem was tackled as a marketing issue and solved by shipping nearly finished products from Canada to a warehouse in New York where some minor degree of production had to take place to transform the product from raw material into a sale ready final product. “Now that the Canadian companies can offer a U.S. address to sell to U.S. consumers, it eliminates the worry that formerly appeared on an invoice,” Owens explained.

Tapping the Economic Engine
Understanding your customers is an important concept to study on an ongoing basis to ensure success in business. Given the volume of Canadian businesses and tourists crossing into northern New York on a daily basis, it makes sense for every local business to investigate how they can tailor its services and products to appeal to our northern neighbors. This could be as simple as placing a welcome sign and flag in your window or keeping abreast of the continuous research and work that the North Country Chamber of Commerce does in this area. A recent example of this was a Canada 150 marketing campaign locally to honor the 150th anniversary of Canada’s independence this past summer.

Retail establishments like hotels, restaurants, and shops are likely to feel a direct connection to Canadians as customers. Owens cautions those who are not in those industries to stay mindful of the indirect impact that these customers have. People living or visiting in the area use all kinds of services in our community.
Business-to-business services such as the supply of food, beverages, linens, and cleaning services are all directly impacted by cross-border economic factors. “I don’t necessarily think that someone whose job is to deliver beer to local restaurants thinks about how much of that beer is going to be consumed by Canadians,” Owens gave as an example, “and therefore, many people miss the fact that if the Canadians weren’t here, their jobs might be diminished.” Owens suggested that local employers can help by impressing on all of their workers that being helpful and appreciative of Canadians is a good thing—whether they are in their place of employment or in the Champlain Centre Mall parking lot.

When a Canadian company calls on Stafford Owens for assistance doing business in New York, Owens has the experience, history, and perspective to see the big picture. “I see a complete process unfolding,” he said. “I see them coming in and borrowing money from a bank. I see them building a building. When the building is complete, they’re employing people to do their manufacturing or warehousing. All of those people are at least secondarily impacted by the decision of that Canadian company to do business here.”

The border crossing goes both ways, and Owens highlights this as an issue that he believes is frequently missed in conversations about the U.S.-Canadian economic partnership. Tapping into the greater Montreal area as an opportunity for new customers to export supplies that companies need there is an area ripe for development. Local companies that are looking to expand products should consider sourcing some of their materials from Canada due to the favorable trade agreements in NAFTA and CAFTA. “Lots of raw materials and goods come from China. It may be worth exploring what’s available in Canada in terms of production because those goods would come in duty free to you, whereas the Chinese goods are likely to have duty on them,” Owens offered. In addition, transportation costs to move the goods would likely be substantially lower.