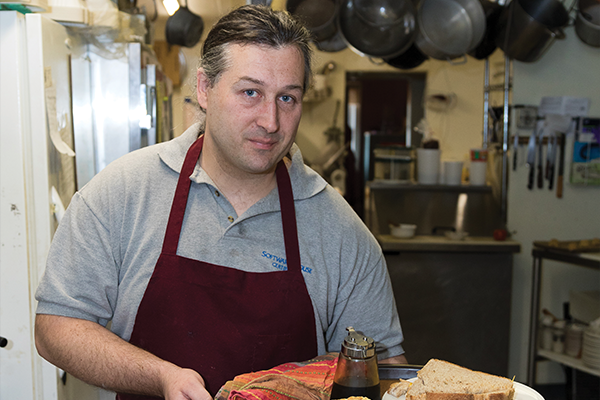 When I first met Josh and Sarah Vaillancourt, they were at the Plattsburgh Farmers Market as Woven Meadows Farm, a pasture-based sustainable family farm. Their operation was based on a holistic perspective, seeing all aspects of the farm as interconnected as well as the farm as interrelated with the wider community and environment. “Throughout our farming activities, we strive for ecological and social sustainability by nourishing individuals and families, fostering community, and being stewards of our land and livestock,” they observed. Everything “woven” together. Hence the name.

When the Vaillancourts founded Woven Meadows a half dozen years ago the plan was to grow their dairy herd and develop a creamery. By 2015 they were ready; they just needed to find a suitable property. When they learned the Rustique, a popular Saranac restaurant, was for sale, they made their move. Unfortunately, they were too late; another buyer had made an offer. They were disappointed but ready to make a new plan.

After weighing their options, the couple decided to build the creamery on the land they already owned. Work had begun on the creamery when one day, just after they had accepted delivery of the trusses, their phone rang. During the ensuing conversation they learned the initial sale of the Rustique had fallen through and the sellers were looking for other interested parties. Yes! They were interested!

When they closed on the property their plan was to convert it to a creamery and a café/farm store. “We really like cheese,” Sarah shared with a chuckle. But the logistics of a creamery — even one just four miles away from the farm — along with their growing family was just too much. It was time for a new plan. That’s when Josh and Sarah went all in on their café/ farm stand idea.

It took the summer to get the operation started but by Labor Day week- end the Vaillancourts had the Farmhouse Pantry (FHP) up and running and Josh was turning out pies, tarts, cakes, eclairs, cheesecakes, cookies, brownies, cupcakes, cream puffs, and macaroons to be enjoyed in house with a favorite beverage or to go. “Everything he makes is from scratch,” Sarah explained.

The success of the bakery inspired the Vaillancourts to think even bigger and an idea to add a restaurant took shape. While the couple worked out their plan, they embraced the reality that having a farm, a family, a restaurant, and a creamery might leave them a little over extended. In a pragmatic move they let the idea of the creamery go and continued to tweak the FHP to what the community was asking for. Today the FHP offers a full menu of soups, salads, sandwiches, pizza, both light and hearty breakfast items, and Stovetop Specials that Chef Josh serves up home- style from pan to plate as well as dessert treats from the pastry case. `

A few years after the restaurant opened friends wanted to hold a potluck supper and asked the Vaillancourts to host the event. They agreed and what they thought would be a one-time event became a phenomenon. Called Long Table Dinners, these gatherings brought diners together at one table. The meal was served family style with plenty of dishes to pass around. The idea, designed to foster a sense of community for all who attend, was so well received the FHP plans to host them seasonally.

Many of FHP’s menu ingredients are sourced from Woven Meadows. What they don’t raise themselves, they buy direct from area farms and what they can’t source from local farms, they buy from regional distributors. “We use Regional Access from Ithaca and Hillcrest Foods from Saratoga Springs,” Josh said. “Being locally sustained is really import- ant to us.”

The FHP Farm Store attracts foodies and regular folks who enjoy eating well. Meat from Woven Meadows is available as well as products from other area farms: salad greens from Oregano Flats Farms in Saranac, syrups from Mazzotte’s Sugarhouse also in Saranac, vegetables from Juniper Hill Farm in Wadhams, natural and raw honey from Harnden Hollow in Cadyville, grass-fed cheeses and yogurt from North Country Creamery in Keeseville. Customers can enjoy coffee from Adirondack Coffee Roasters in Plattsburgh and for an after 5 p.m. beverage FHP offers draft beers from Livingood’s Brewery in Peru and wine from Hid- N-Pines in Morrisonville.

The farm store also offers homemade soaps, hand spun and dyed yarns, fair-trade teas, spices, and baking supplies. “We want to be responsive to what our customers are asking for so our offerings are continually growing,” Sarah observed. The Vaillancourts place great value on their relationships with their customers, their community and their farmers. “I encourage everyone to meet their farmer, get to know the people growing your food, find out about their practices,” Josh emphasized.

HOW DO THEY DO IT?

The scheduling feat the Vaillancourts pull off daily is amazing. Farm chores are done before Josh goes to the FHP. The bus drops the children off at the café after school and Sarah joins them after work to help prep for dinner and make sure homework gets done. I sat with the Vaillancourt family after the restaurant closed on a Monday night recently. The patrons had left, leaving behind clean plates and compliments to the chef. As they left, they called Sarah and Josh by name and made plans to come back again soon. If I closed my eyes, I had the sense they were leaving the home of a friend.

The FHP is setting the standard for farm to table here in the North Country. The Villancourts are living their dream, supporting local farmers, building a sense of community, and feeding our souls. Delicious!!