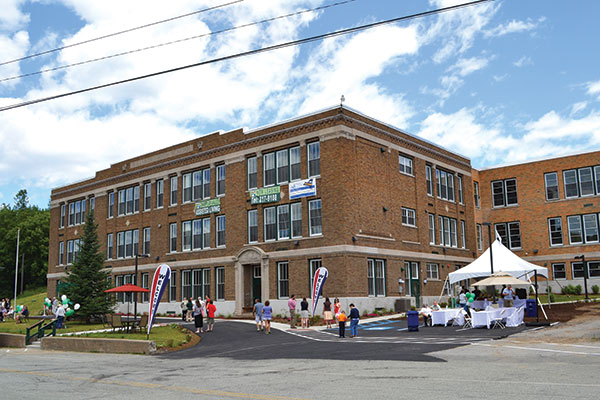 The Adirondack region means different things to different people. For Eli and Emily Schwartzberg the affection they have for the area has brought the couple full circle. Both attended Northwood School, a college preparatory school in Lake Placid. Emily, originally from Gloversville, was a competitive skier and a resident boarder, spending as much time as possible on the slopes at Whiteface. Eli attended Northwood as a day student, commuting from his home in nearby Lake Placid. The two met on a ski trip and then as students will do, went off in different directions to pursue their education and careers.

Eventually their mutual love for the region brought them back to the North Country where they crossed paths once again. Eventually the duo teamed up in business, creating the Champlain Valley Senior Community (CVSC) in Willsboro. CVSC is a family owned and operated assisted living and memory care residence housed in the former Willsboro Central School building on the banks of the Boquet River. During the startup phase of operation Eli served as the facil- ity’s Executive Director while Emily acted as Marketing Director. They also teamed up in life, marrying in 2012 and in time welcoming a son, Elliot.

Off and Running
During high school, Eli immersed himself in the restaurant world, working at many of the region’s high end resort properties, including the Lake Placid Lodge and The Point in Saranac Lake. Hoping to learn the business end of hotel and restaurant management, he attended Cornell University’s School of Hotel Administration, graduating in 2003. “I went to Cornell thinking that I wanted to open a restaurant chain, but left wanting to go into real estate development. I took a job working for a Cornell alum in Miami who owned a company that built senior and residential housing,” Eli explained. But he found himself missing the Adirondacks. “I wanted to do something that had meaning and that was good for the Park (Adirondack Park). I needed to make a living and I wanted a challenge.”

Meanwhile, Emily attended Bates College, skiing competitively for the school’s Division 1 team and graduating in 2007 with a B.A. in English. She received an M.A. in Advertising from the S.I. Newhouse School of Public Communications at Syracuse University in 2009 and then found her way back to the Adirondacks. She took a position at Adworkshop, an employee owned integrated marketing agency in Lake Placid, doing public relations, social and content marketing. “I grew up in the southern Adirondacks and was excited to return to Lake Placid where I could have a career in my field and enjoy the many outdoor activities, including skiing, that the area offers,” she said.

The Dream Takes Shape
When Eli returned to the area, he began studying for the GMAT (Graduate Management Admission Test), his sights set on the Saïd Oxford Business School in the UK. His studies had him making frequent trips to the Paine Memorial Library, which was located next door to the former Willsboro Central School. He heard the town was looking for a local person to take the uninhabited building, built in 1927 and vacant since 2001, and give it new life. If they could not find someone to rescue the school they would soon have to spend nearly $800,000 of local taxpayer dollars to tear it down. Eli bought the building in 2008.

If he wanted a challenge, Eli got more than he bargained for. He began renovations to the building during the height of the recession. “No one was lending money. When I mentioned Willsboro, most bank- ers responded, “Where is that?” and “It’s not in our footprint,” Eli recalled. His pleas for financial assistance to save an old school in the Adirondacks were finally heard, and he was able to secure a USDA loan. In the meantime, in 2009 he completed his MBA.

2012 was a busy year for the couple. They married in September and soon after purchased and reopened A Pinch or a Pound candy store on Main Street in Lake Placid. A year later when renovations to the old school were completed, Eli and Emily opened the doors of the assisted living residence. With their combined business, marketing and advertising acumen the couple worked on the principle of “If you effectively market it, they will come.” And they have, as evidenced by the 100% occupancy rate at SB’s publication date.

Champlain Valley Senior Community
The facility, located at the end of a tree-lined road, right on the river, is a capstone of sorts for the tiny village. “The locals have been very supportive,” Eli said. “CVSC acts as an anchor in the town, with 55 employees, almost all of them local. Our department heads are buying homes and there is a clear ripple effect. The water has risen for everybody in the community.”

In one of the most difficult industries to retain staff, resident care aides have the highest turnover rate. “Normally, most jobs are at a 15-20% turnover, but the turnover in nursing homes runs from 50 to 100%,” Eli explained. “We strive to keep our resident care staff turnover well below the norm by being pro-active. We offer great benefits including free gym memberships, health insurance, year- end bonuses, an Employee of the Month program, loyalty bonuses and built-in raises. We are all about our staff. They are the product that we deliver to our residents.”

The couple has added the old school to the National Register of Historic Places, and retained some of the building’s original features like chalkboards, benches from the basketball court and murals created by students that passed through the halls. They have created a warm, nurturing and inviting environment for their residents, and a positive working environment for their employees in the school that houses so many memories. Currently Eli oversees general operations while Emily is working on a Master’s degree in Health Administration.

Eli explained, “We are grateful that we have been able to build a successful company in the Adirondacks. It’s important to Emily and me that our work has a positive impact and CVSC has significantly helped area seniors and their families, our local economy and it has revitalized a historic building that would have otherwise been torn down. We’ll continue to seek out opportunities to make a difference in this region and contribute to our Adirondack communities in a meaningful way.”