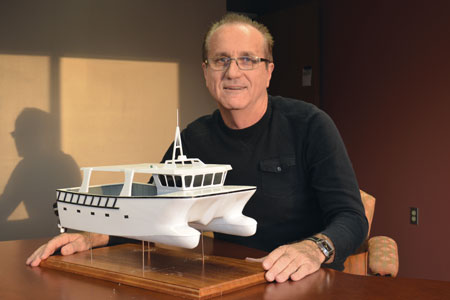 ProCat U.S., owned by Magguy Thibodeau and Michel Pachiaudo, has begun to produce the ProCat 320, a catamaran work boat that is more than a redesign of a classic vessel. It is a fiber- glass symbol of how perfectly applied vision can spur an innovative business, stimulate economic growth in a North Country village and provide a valuable working tool for those involved in fishing, education, government, and as a logistic solution in remote places in the world. “Many places do not have roads,” said Pachiaudo from his manufacturing plant in Rouses Point. “Travel by water is more practical and efficient. We want to increase the use of boats for the transportation of goods and services. Since the ProCat 320 only needs 18 inches of water, it can go in shallow ports, rivers, almost anywhere.”

Coming from the Tamil word kattumaram, which means “logs tied together”, catamarans originated about 2,500 years ago in South India and Polynesia (think outrigger canoe). Simply put, a catamaran is a twin-hulled vessel with a deck built on top of a wide beam. A catamaran’s longevity and flexibility are due not only to its shallow draught, but its stability in rough waters and bad weather, as well as its fuel efficiency (the twin hulls cut, rather than push, the water). Powered by sails and the wind, and later, by outboard motors, catamarans were consistently and successfully used throughout the world as ferries and work boats. Today, the U.S. Navy uses them for military cargo transport, they work as survey ships in China, Indonesia and India, and Norway uses them to ferry people among the most populated of its 50,000 islands.

Americans may be familiar with the popular pleasure boat, the Hobie Cat, introduced in the 1950s. While the catamaran was not previously known for speed, in 1967 Rodney March of England designed the Tornado catama- ran for the Olympics and literally blew the competition out of the water. Re-designed in 2000, the Tornado con- tinues to win races in the America’s Cup.

With this pedigree it is understandable why Pachiaudo, boat builder, manufacturing consultant and forward thinker chose the catamaran as the basis for the ProCat 320. By constructing it from fiberglass (the first manu- facturer in the U.S. to do so) rather than aluminum, the ProCat 320 is not subject to electrolysis corrosion. In addition, Pachiaudo added unique rounded tips (bulbs) to each hull, giving the vessel 30% more fuel efficiency, a deck awning and two 300 horsepower outboard (or stern drive) motors. His 32’x15’x10’ workboat with 328 square feet of deck space is suitable for a myriad of oper- ations around the world: Coast Guard operations, bridge construction support, fishing, windmill and buoy main- tenance, firefighting pump and rescue, as an on-water research laboratory, commuting, logistical solutions, and delivery of medical personnel to hard-to-reach areas.

“The original design is British, but we incorporated the naval engineering modifications for commercial boating in North America,” explained Pachiaudo, as he showed this writer the ProCat 320 prototype. “Our boat is com- pletely customizable and is outfitted to order. A client may request any kind of accessories.”

A native of Brazil, Pachiaudo built his first boat at 17, and owned and managed a fishing fleet for over a decade. After accepting a consul- tant position from Mercedes Benz to manage its manufacturing assembly lines, Pachiaudo immigrated to Canada 27 years ago.

Fast forward nearly three decades. Pachiaudo was ready to retire from a rewarding career and wanting to start a business that embod- ied his passion of building a boat of his own design that incorporated his values (envi- ronmentally and community conscious and a sustainable economic opportunity). He per- fected his catamaran work boat design, then enlisted his wife’s partnership. “It wasn’t hard to convince her to join me in this new excit- ing phase of our life,” confirmed Pachiaudo. “She is passionate about boats and evolution.”

His wife, business partner, co-visionary, and president of ProCat U.S., Magguy Thibodeau, is a successful stock broker and financial advisor in Montreal. Her vision and attention to the human element in business, as well as her financial and administrative skills, round out their collective skill set for ProCat U.S.

Thibodeau and Pachiaudo began to write a business plan in June 2014. “Karen Stehlin at the Small Business Development Center helped us develop it and counseled us on how to negotiate with an investor. Donna Fessette at One Work Force connected us to our fore- man, Steve Patrick who is my right arm and has been with me since the beginning. Bill Ferguson from Empire State Development and Sue Matton from the North Country Chamber of Commerce were also instru- mental in helping us get this business going.”

Thus prepared, Pachiaudo pitched his busi- ness plan to Point Positive, a group of angel investors in Saranac Lake in December 2014, and with their financial support, started ProCat U.S. After he found manufactur- ing and office space at 5 Lincoln Boulevard in Rouses Point and with Thibodeau over- seeing the operations and sales, Pachaiudo, Patrick, and a team of six workers began con- struction of a full-scale model in April of this year. He will bring the finished boat to the New Orleans World Work Boat show in December and Maine Fisherman’s Forum in March 2016. After that, the ProCat 320 will tour the Eastern seacoast for 60 days. As con- signment orders come in, the work crew will be expanded to 50, 27 for the assembly line and, under full production, produce a com- pleted boat each week.

This is a very exportable product,” explained Pachiaudo, “and the ProCat plant’s Rouses Point location, with its connection to the St. Lawrence and Hudson rivers, makes it a perfect boat build- ing hub. We are hoping the success of ProCat will encourage other boat-related businesses to open here. Good business brings more business and the need for skilled workers.”

As the ProCat 320 moved toward completion, Pachiaudo discussed his vision for someday building a totally “green” catamaran. As he held up a flap of golden woven fabric, he explained, “This fabric is a natural cellulose- based product from Bangladesh. It is made of jute (a long, strong vegetable fiber made of course threads) and coated with a resin made from soy and pineapples. It is flexible, water- proof and very strong. Using jute would help the economy of Bangladesh as well as create a truly biodegradable boat. We have to be flexible with our idea. The potential for this is infinite,” he emphasized.