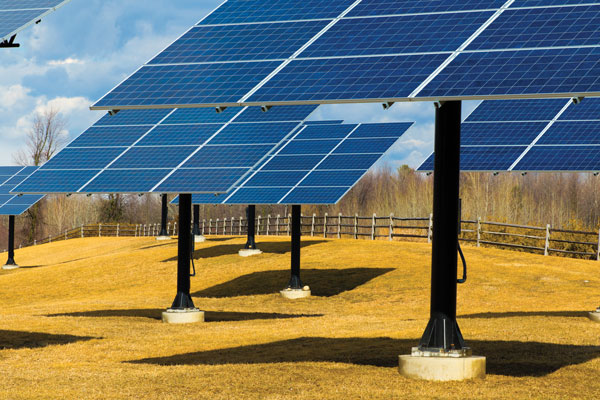 “The least expensive watt is the one you save,” said Curt Snyder, owner of Crest Solar. He’s not just an experienced installer of solar systems, he’s been saving watts and watts of energy living off the grid for most of his life.

Snyder was just a kid when his mother and stepfather moved the family to the North Country from England, settling in a 1890s summer camp on Brinton Road in Keeseville. With propane lights, no electricity, no running water, or even insulation, Snyder recalls waking up with snow on his blankets during the family’s first winter there. His mother worked at the Keeseville Free Library and his stepfather was a civil engineer—roughing it was a choice for the family, and being raised on the sun was a lifestyle that stuck with Snyder, who still lives in the now properly insulated homestead. The Crest Solar office and Snyder’s mother’s house are on the same property, all completely disconnected from the grid.

After attending high school in Rochester, Snyder worked in tool and die as a plastic injection mold maker. He moved back to the area in 1994, working in the aerospace industry making guidance systems and high tolerance parts for missiles. In 2004, right around the time New York State began to incentivize the renewable energy program, Snyder recognized the growing solar market as a way to capitalize on his experience and expertise in the field. “Since I already lived off grid and I had developed my own system, I decided I would see if I could make a living at it,” he said.

As the price of solar panels gradually decreased, the industry remained heavily subsidized through steep tax incentives, making grid tied solar living feasible for many homeowners. In that time, Snyder and his crews installed about 200 systems. At the start, 90 percent of Snyder’s business was installing off grid systems. Slowly over time, grid tied systems became the majority; out of 23 installs last year, only one was off grid. Snyder chalks this trend up to two things: 1) “I am doing less off grid jobs by choice, because a lot of the off grid stuff we did was very small. Now I’m only choosing the off grid systems that I can make money on (averaging about 9 kilowatts), instead of just being ‘the solar guy’.” 2) “I’m limited because I’m the only guy in my crew who can do a full off grid diagnostic. They are much more complicated, and there’s more maintenance because of the generators and batteries. With grid tied systems there’s hardly any maintenance.”

The low maintenance grid tied systems are literally set-it-and-forget-it. Solid state construction with no moving parts add to an array’s durability. Current panels being produced with Taiwanese and Chinese lab grown crystals are said to last at least 25 years with about 20 percent reduction in production over that time. Snyder (and NASA) predict the overall life of the panels to be closer to 50 years. In the Northeast in the winter, panels produce less juice, and they won’t produce any at all if they’re covered in snow, but solar arrays are sized for averages—in spring and fall they’re just about perfect, whereas they over generate in summer and under generate in winter (but who doesn’t?).

Even in this six-month tundra of a region, going solar offers a seven or eight year payback. “Where else are you going to get double digit returns on your money?” asked Snyder. “Not in the bank. And you better be damned good if you’re getting it on Wall Street. This is an investment in your home and you’re insulating yourself against future power rate increases. It’s a one-for-one back and forth, so as long as you’re generating all the power you need, your bill should only be what the monthly access charge is (around $17).” And now’s the time to invest, as incentives and subsidies are set to change and eventually eliminate in the coming years.

As with many New York State programs, the language and paperwork can be a deterrent to many homeowners looking to the sun to save some dough (not to mention tons of greenhouse gas emissions). But that’s what Snyder and many other NYSERDA (New York State Energy Research and Development Authority) certified installers are for. Not surprisingly, the paperwork is Snyder’s least favorite part of the job, but with a decade of experience and hundreds of projects, Snyder has helped many North Country residents find profit through solar.

“Just living with it is cool, and then I get phone calls from customers saying they pay $17 a month for electricity, or they haven’t paid a utility bill in three years, or NYSEG sent them a check for $108 because they over generated. I still get done with every job and think, ‘Man this is cool.’ “