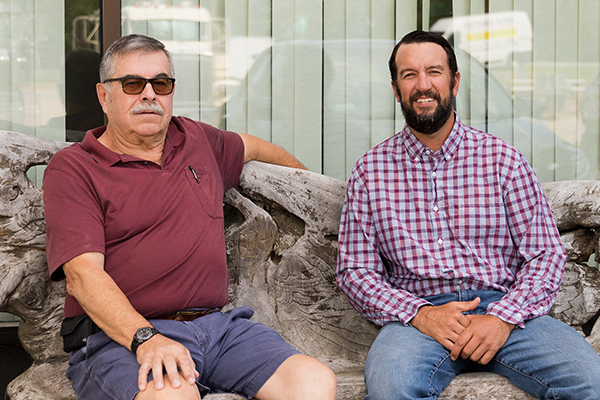 I recently sat down with Pat Leary at his compound just south of Plattsburgh. Its physical footprint mirrors his business growth in the community. Leary, a North Country native, has a strong background in construction, knowledge and experience he put into a Roto Rooter franchise in 2010. Over the next decade he expanded, acquiring Shingle Street Septic, the Basement Guy and AllSafe Sprinklers — all of which serve as the foundation of PM Leary Restoration.

Leary’s business has been built on a simple philosophy. “Our core value is to never say ‘No.’ It doesn’t matter what it is, we will get it done,” he said.

Being the go-to for commercial and residential restoration isn’t something that happens without hard work and commitment. The business operates in five counties in the North Country, from Schenectady to Rouses Point, west to Potsdam, from Tupper Lake to Elizabethtown and everywhere in between. A challenge Leary’s crews experience is inconsistent availability of broadband connection. Doing business electronically from some areas goes from challenging to impossible. Leary is eager for the time when that is no longer the case.

DEFINITIVELY DYNAMIC
Leary continues to pivot by controlling the controllables. To that end he has been able to manage the growth of his business. His latest acquisition was Champagne Siding, Windows and Doors. “I grew up knowing the name Champagne,” Leary said.

Bruce Champagne has been the owner/operator of Champagne Siding for half a century. When he began to contemplate retirement, he and Leary came to terms and Champagne is building his future as a PM Leary Company.

“Bruce still does every estimate, schedules the orders and runs the crews,” Leary explained. “It is an arrangement that works for both of us.” Champagne was happy to bring his crew along with him. “Being in business for as long as I have, I am grateful for the loyalty of my customers, but I have guys (employees) that have been loyal to me too! Most of my crew has been with me for more than 20 years and half of them for twice that!” he shared with a chuckle.

Champagne and his crews show no signs of riding on their reputation. Instead, they continue to earn their good name. Champagne shared a story of a woman who called about a piece of soffit that had blown down after a recent wind storm. “The lady was really upset. She could see the soffit hanging right in front of her window. She was elderly, alone and nervous that she was going to incur further damage. I knew one of my guys had to pass by her location on his way home so I asked him to take a look. It took him longer to visit with the woman than it did to set up and fix it for her!” Champagne recalled. Leary spoke up, “That’s why they are a legend in the North Country. The value of taking care of people just because it’s the right thing to do is a critical part of the company’s philosophy.” Becoming a PM Leary Company will only enhance Champagne’s ability to do just that.

Leary continued, “Workforce loyalty is worth its weight in gold.” When talking about the challenges of sustained growth he was candid, “The labor shortage is real. It is across the entire community. The work is out there, but for the first time ever I am seeing jobs cancelling because they can’t wait so long. I can’t blame them!”

Leary has always strived to be an employer of choice, never shying away from doing things differently. With guidance of General Manager Jessica Kline, Leary has added a commission incentive to his employees’ payroll programs, but while his employee retention is good, to sustain his growth he needs new hires.

Looking for home grown local talent and working with local trade schools and high schools as well as a program called Blue Collar Connection is one way Leary tries to address the problem. That enables him to participate in students’ training and offer them jobs in the industry after graduation. Unfortunately, the pandemic has challenged some of the most impactful dynamics of trade education which require hands-on learning through face-to-face instruction. At a time when pandemic protocols are lifting somewhat, Leary and his team are patient and understanding, and look forward to receiving applications. “We are always accepting them,” he emphasized.

DIVERSIFICATION IS KEY
While the P in PM Leary stands for Patrick, it could also stand for pivot. While Leary’s dedication to residential and commercial restoration is unwavering, he has acquired several rental properties, bringing his portfolio upwards of 50.

His ability to smooth out the impact of his dynamic growth was recognized in 2019 by the Chamber. “One of my proudest moments was receiving the Business Person of the Year award from the North Country Chamber of Commerce,” he observed. Leary is used to giving the praise, but receiving such recognition from the community he grew up in rendered him speechless.