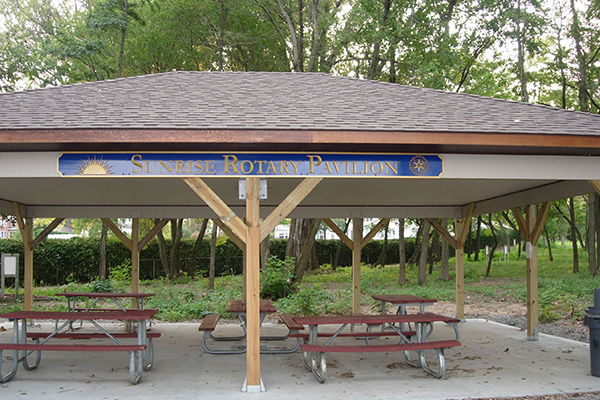 The Sunrise Rotary Club, best known as the host of the Plattsburgh Mayor’s Cup Regatta & Festival in July each year, solicits sponsorships and sells locally- designed Mayor’s Cup t-shirts to raise money that is then used to enhance the quality of life in the area.

Past projects financed by the club are the Sunrise Rotary Pavilion at Wilcox Dock and the Rotary Gazebo at the Samuel D. Champlain monument located off Cumberland Avenue in downtown Plattsburgh. The club raised over $25,000 to construct the universally accessible Max Moore Memorial Treehouse on the Saranac River Trail in Plattsburgh. Funds here also provided by Sunrise to build a boardwalk on the site of the LaPierre Lane Riverway, a spur on the Saranac River Trail Greenway in Morrisonville that opened to the public in 2018. The club is currently an avid supporter of the Outdoor Arts Projects as part of the revitalization of Plattsburgh’s historic downtown.

Current president, Susan LeBlanc-Durocher, speaking enthusiastically about Rotary’s success in the North Country stated, “Rotarians are passionate in their work, proving even a few people can change the world.”