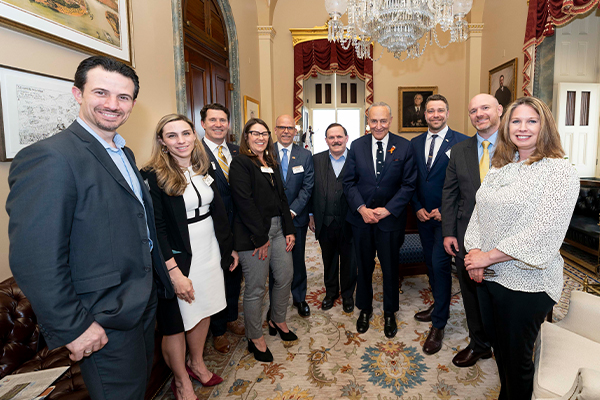 For many years, the North Country Chamber has endeavored to position itself as an effective voice for North Country issues and projects in Washington, going back to the Plattsburgh Air Force Base redevelopment process in the 1990’s. Our approach is based on forming and sustaining mutually valuable, bi-partisan relationships with our Senators and Members of Congress, leaving big national issues to the U.S. Chamber of Commerce and others while we focus on the region-specific matters no one else will advocate for on our behalf.

The interaction is continuous and largely unseen, ranging from calls and emails to hosting occasional visits to the region. And until the pandemic interrupted that for two years, it included personal visits to Washington with at least one hand-picked group visit each spring. This latter practice recently resumed, involving a sit down with Senate Majority Leader Charles Schumer, Senator Kirsten Gillibrand, Congresswoman Elise Stefanik, and Governor Kathy Hochul’s Washington staff. The face-to-face interaction at the Capitol is an important element of working our regional agenda and it was great to be back there.

As always, our 2022 federal regional agenda is varied, looking to matters we believe we can help move forward this year or, sometimes, tee up for next year. As always, it features the Canada-U.S. relationship including the need for further progress at our shared border and specific projects such as the pending new border facilities at Rouses Point and Trout River, and strategic opportunities for enhanced U.S. economic partnership with Quebec, from clean energy to access to an array of strategic minerals now obtained from places like China and Russia.

The needs of our large and growing cluster of transportation equipment and aerospace manufacturers are always high on the agenda, from anticipated federal funding for green buses and rail to specific procurement related issues and concerns, including workforce development.

Facilitating the pursuit of defense related activity for our companies has also become important, including current interactions involving Norsk Titanium and BETA Technologies. And support for targeted federal investments in projects of various kinds, from broadband to airports to several specific sites such as Fort Ticonderoga, among others.

The approach works, letting us punch above our weight as a rural region within a vast imperial metro-centric state. The evidence is seen in such things as policy impacts at the border and over half a billion dollars in state and federal funding for strategic projects. And with the full array of approaches back in play, including Washington visits, we expect progress on several matters in the coming months.

Onward and upward!
Garry Douglas is president of the North Country Chamber of Commerce.