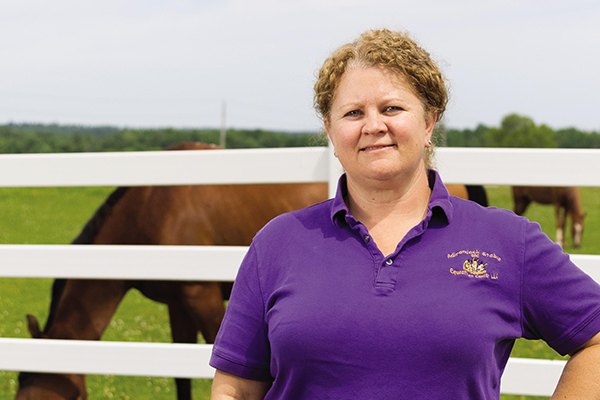 When they arrive at the pristine Adirondack Stable and Equestrian Center in West Chazy, clients are greeted by Fenway, an engaging Golden Retriever enthusiastically wagging his tail and proffering a stick. They are then ushered into the barn for their horseback riding lesson with Amy LaValley, Therapeutic Riding Instructor and stable owner.

Born and raised in West Chazy, LaValley always had horses, and was an avid 4H member. “It’s not always about the riding. It’s about forming a bond with the horse,” she explained. “Most of my lessons are private or semi-private so I can have more personal interaction with each student, and not only teach riding, but empathy and compassion. A horse is part of a herd. They can teach people how to react in a social environment. You’re not always going to be the leader; sometimes you’re a follower. If you want to interact with the horse, you must come in with a calm, welcoming, open attitude. You have to let any negativity go at the door.”

When LaValley opened her stable in December 2006, she created Manely Magic, an equine-assisted therapy (EAT) program for individuals with physical, emotional, or cognitive special needs. In addition to riding, grooming and horse-care skills are taught to encourage relationship building. She also offers boarding services but her first love is teaching.

Currently, LaValley works with 40 students who come for 30-60 minute lessons. She owns 10 horses (eight are used in the program), and boards an average of 10-15 horses. The property, located on 32 acres of the grounds of the former Steven Atwood farm (the first settler in Chazy), was cleared and developed by LaValley, her husband, Ron, and her father, Dan Nephew (who formerly bred horses next door at Nephew Quarters and Paint). Together, they built two barns (one with horse stalls, the other for hay and equipment storage), paddocks, and outdoor and indoor riding arenas. Since the property had power lines on it, and an old sugar shack that looks like it belongs in Scooby Doo, they cut several miles of trails to allow clients the quintessential bucolic experience. They can relax in nature and see deer, rabbits, and fox in the wild. LaValley provides saddles, bridles, helmets, and adaptive equipment for riding. Not surprisingly, she has a waiting list.

How it All Got Started

After graduating from Beekmantown High School, LaValley took some college courses, went into the workforce, and eventually became a process operator at Wyeth Labs in Rouses Point. After four years, when layoffs were announced she took advantage of their tuition reimbursement program to finish her Business Administration degree at Clinton Community College. As she was struggling to figure out where to go from Wyeth, LaValley discovered an article on equineassisted therapy. It was then that she realized what kind of business she wanted to create.

In 2006, she enrolled in a unique, intensive program offered at Horse Power at Pony Farm in Temple, NH. Living on the farm for three months, she learned how to teach horseback riding to physically, mentally, and emotionally challenged individuals. “It was hard to leave my family, but I needed to live, eat, and breathe that environment in order to gain the knowledge and confidence to come back here and open up this business,” she explained. “My husband and daughters (Jerika and Kacie, then aged 7 and 9) were very supportive, but it was tough. I missed their first day of school, Halloween, and they all lived on hot dogs and macaroni and cheese. In the end, we survived, and I earned an advanced certification in equine-assisted therapy.”

Her first student was a five-year-old from Morrisonville who has CHARGE syndrome (a genetic disorder) and autism. Now 17, the young man continues to have weekly riding lessons throughout the May-November season. According to his mother, equine therapy has helped her son progress by leaps and bounds. “For him, being on a horse is incredible,” she emphasized. “To watch him grow physically—his balance has definitely improved—and make an emotional connection with a horse is amazing. Even though he is non-verbal, you can tell by his body language and facial expression that he’s happy to be riding.”

Although she works with clients of all abilities, therapeutic riding comprises most of LaValley’s business. “It’s amazing how that side of the business grew,” she said. “Working with emotionally handicapped clients has turned out to be the most rewarding aspect of my job. It’s hard work, but it’s gratifying. I surprised myself at how much I loved it.”

Therapy programs choose horses of any breed that they find to be calm, even-tempered, gentle, serviceably sound, and well-trained both under saddle and on the ground. As most equine-assisted therapy is done at slow speeds, an older horse that is not in its athletic prime, but is intelligent, experienced, and intuitive is sometimes used. Suitable horses move freely and have good quality gaits, especially the walk. Each individual animal has natural biological traits but also has a unique personality with its own likes, dislikes and habits. Paying attention to what the animal is trying to communicate is helpful both in therapy sessions, and also prevents burnout for the horse. The horse, a sentient being, is considered a partner in the therapy process.

A favorite on the farm is Mazie, nicknamed “Mrs. Ed” for her tendency to open her mouth in an attempt to talk. She is a gray 24-year-old quarterhorse, and the first horse LaValley purchased for the business. “Equine-assisted therapy is intellectually challenging for a horse, much more than physically challenging,” explained LaValley. “Mazie’s got that instinct, and that’s something you can’t teach. She knows when to challenge a rider, and when to take care of them.”

Another beloved equine is Gidget, a Shetland pony and at 35, the oldest horse on the farm. Patting her fondly, LaValley explained: “She is too old to be ridden. We use her to teach grooming and leading skills.” LaValley also has show horses: Blake, Preston, and Spud. Blake,

LaValley’s personal horse and a gift from her husband, broke his leg during his first year at the farm. Resisting the veterinarian’s advice to euthanize him, LaValley spent 18 months nursing him back to health. It was a very proud moment was when he returned to the show pen and placed third in the quarterhorse show circuit.

Balancing Work and a Personal Life

LaValley, who lives nearby, begins her day at 7 a.m. with chores: 90 minutes in the summer season (May-November, when the horses are outside) and 4 ½ hours in the winter. She does her own bookkeeping and record keeping. Since she works with agencies such as Behavioral Health Services, CV-Tec, BOCES, ARC, Residential Resources, and the Office for People with Developmental Disabilities (OPWDD), there is a great deal of paperwork. Her husband, daughters, and niece, Mallory Tourville, all provide assistance with the horses and the chores, especially during haying season from June-August. A group of local volunteers also helps.

“It’s hard to separate work from home,” admitted LaValley. “I put in 20,000 steps a day without even trying. I usually take Friday and Sunday off. In the summer, Ron and I spend as much time as we can on our boat (docked at Treadwell Bay Marina).”

Speaking of summer, LaValley runs a weeklong Summer Horse Camp. Students come from 9 a.m.-3 p.m. and do everything from chores to crafts to riding to yoga (taught by Tricia McCartney). LaValley limits the summer camp attendees to eight participants. She doesn’t need to advertise. “It is strictly word of mouth,” she said with a smile. And as it says on her brochure, “Our barn door is always open.”

Equine-assisted therapy (EAT) encompasses a range of treatments that involve activities with horses and other equines to promote human physical and mental health. Working with individuals who have physical, cognitive, and emotional issues, EAT can strengthen bodies and minds, and offer lifelong opportunities for recreation and well-being. For example, individuals with muscular dystrophy, cerebral palsy, multiple sclerosis, autism, attention deficit disorder, hearing and visual impairments, brain injury, and developmental delays can benefit from increased balance and muscle tone, improved posture, enhanced confidence and self-esteem, and stimulating activities for sensory processing disorders. Through individual or group instruction, individuals can also learn communication skills and overcome fears. In the US, the quality of programming and accreditation for over 400 centers is monitored by PATH, a non-profit service organization dedicated to promoting horseback riding for the handicapped.

The earliest recorded mention of horses being used as a therapeutic aid is found in the writings of Hippocrates (460 BC-370 BC), the Greek physician and founder of Western medicine. EAT, as currently practiced, was developed in the 1960s, in Germany, Austria, and Switzerland as an adjunct to traditional physical therapy. In the 1980s, a group of Canadian and American therapists traveled to Germany to learn about EAT and brought the new discipline back to North America. The discipline was formalized in the United States in 1992 with the formation of the American Hippotherapy Association (AHA). Since its inception, the AHA has established official standards of practice and formalized therapist educational curriculum processes for occupational, physical and speech therapists in the US.

The first riding centers in North America began in the 1960s. The North American Riding for the Handicapped Association (NARHA) was launched in 1969 to serve as an advisory body. Beginning in 1996, the Equine Facilitated Mental Health Association (EFMHA) was created to set the standards for instruction, certification and research in the field of equine-facilitated mental health. It formulated educational materials and accredited practitioners at nationwide Equine Specialist workshops, and worked as an advocate for the implementation of mutually beneficial standards of safe, ethical and effective EAT practice. In 2009, the EFMHA merged with NARHA, and in 2011, NARHA changed its name to the Professional Association of Therapeutic Horsemanship (PATH) International.