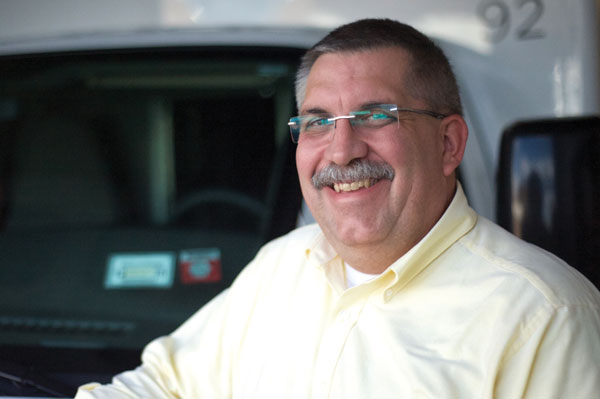 As you travel up the winding driveway, past the manicured grounds and bucolic pond, and take in the commanding building exterior, the University of Vermont Health Network — Champlain Valley Physicians Hospital (CVPH) radiates comfort, security and safety. Keeping the hundreds of patients, staff and visitors who enter the main building, surrounding offices and medical arts buildings, the Fitzpatrick Cancer Center and the Emergency Room safe on a daily basis is no small feat. “We are our own little city,” said Michael W. Cahoon, Director of Emergency Management for the health care facility located in Plattsburgh.

Tucked away on the ninth floor of what was part of the origi- nal hospital you will find the headquarters of CVPH’s emergency preparedness team. Cahoon’s modest office belies the massive responsibility entrusted within. The shelves are lined with binders labeled with acronyms and filled with procedures, flow charts, risk assessments, and analyses. A bulletin board depicts Cahoon in full firefighter garb, hinting at the hat he has worn outside of the hospital for the past twenty years, that of Volunteer Fire Chief for the town of Chazy. Two scanners, three walkie talkies, cell phones and pag- ers are your first hint that Michael W. Cahoon has an above average need for immediate information on what is happening in his world.

Cahoon has been managing safety and security issues at CVPH for eleven years and so being plugged in is a prerequisite for his job. For someone whose day may consist of anything from an active shooter planning discussion to training for an Ebola drill, he seems remarkably calm. As a child, Cahoon grew up in and around fire- houses in his hometown of Richmond, Rhode Island. Since then he has spent most of his life combating emergency situations. He joined the Air Force as a firefighter and EMT and was stationed at Plattsburgh Air Force Base. When it closed, he was hired as a civil- ian firefighter. In February of 2004 he took the job as Manager of Emergency Preparedness at what was then CVPH Medical Center and was promoted to director in April of 2011.

Laying the Groundwork for Preparedness

In 2003, health care facilities across New York State received fed- eral funding for planning and infrastructure development to help them prepare to respond to bioterrorism, outbreaks of infectious diseases, and other emergencies. The program designated eight Regional Resource Centers across the state that would receive assis- tance with training, resources, drills, and help with identifying gaps in disaster response capabilities. “The Regional Resource Center was a helluva network. It was great the way people worked together,” said Cahoon. He equates CVPH’s role in the network as that of a “big brother” in the best sense to the group’s original members, includ- ing Erie County Medical Center, Westchester Medical Center and North Shore University Hospital.

There are now just three fully funded recipients: Strong Memorial Hospital in Rochester, Albany Medical Center and Stony Brook Medicine on Long Island. While deliverables continue to be offered to the other participants (Cahoon recently participated in an Ebola drill), grants aimed at replacing supplies and equipment have all but dried up. But relationships formed with the original members remain strong. “We still help each other out, and at CVPH we continue to build on what was put in place,” added Cahoon.

Acronyms abound in the realm of emergency preparedness, the most important one being HVA, or Hazard Vulnerability Analysis. HVA is a needs assessment that determines the risk of a potential event so that appropriate planning, mitigation, response, and recov- ery plans can be created. High risk events require a corresponding immediate and stra- tegic response. For example, the possibility of a power outage is higher in likelihood than a terrorist attack, but the outage would have a more immediate impact on a larger group of patients’ health and safety. The impact of an outage is reduced greatly by the presence of backup generators and excellent communi- cation with the city and NYSEG regarding the outage.

A jokester at heart, Cahoon believes that when the rubber hits the road in an actual emergency or drill, everyone from the top brass on down take it, and him, seriously. An Emergency Preparedness Committee is in place made up of doctors, trauma unit members, emergency room staff, county health officials, county emergency services, and local law enforcement. All hands are immediately on deck and a conference room on the main floor is converted into a “war room” of sorts, more formally known as the Hospital Command Center (HCC). Cahoon admits, “It’s really cool.”

In HCC, staff come together for instruc- tions and to carry out their pre-determined roles. “The message is clear: we are facil- itating this emergency and this is how we are going to do it,” said Cahoon. Everyone present is part of the Incident Command System. They are given a Job Action Sheet that must be followed to a T based on their assigned responsibilities during an event. Those flow charts for emergency response follow Cahoon’s favorite acronym, KISS, or Keep It Simple, Stupid. Staff check off tasks on their assigned checklist and put N/A if not applicable to the current situation.

Once the event has passed, the response is immediately evaluated. “We look at the good, the bad and the ugly,” said Cahoon. An After Action Report is filed that critiques critical functions of the response including Communication and Staff Responsibilities to see if all cylinders were firing during the event. Areas where improvement is required are noted and will be incorporated into the HVA and covered in subsequent drills if recommended.

It Takes a County

Keeping patients, staff and visitors to CVPH safe and secure from any eventuality cannot be accomplished in a vacuum. The Clinton County Multi-Agency Coordination Group (CCMAC) was founded in October of 2001, along with the Clinton County Health Department, Law Enforcement, SUNY Plattsburgh, Clinton County Emergency Services and the Clinton County Coroner and Medical Examiner. Cahoon stressed his reliance on and confidence in other regional agencies to support CVPH and its efforts in the event of an emergency. “We get along well, we rely on each other. We have separate needs, but need to work together because we are all in the soup together,” he observed.

The member agencies share information, and meet not just during a disaster, but on a regular basis to review plans, discuss issues, incidents, hot button topics, coordination, and commu- nication. Member agencies have been known to send a representative over to the HCC dur- ing a crisis just to be on hand if needed. Even impending snowstorms require a measure of low level planning in the HCC, where they determine how travel delays and canceled flights will affect delivery of essential supplies.

Cahoon’s staff of fourteen officers is fre- quently called upon to weigh in on safety and security issues at the facility. They have even addressed issues of safety in patient room design. Lieutenant Johanna Dominy, a 32 year veteran at CVPH as a Security Supervisor, recommended the need for double layers of sheet rock and door locks based on what she had seen happen to a room. “We keep coming back because they keep surprising us,” said Dominy.

Emergency Room access and egress, with fifty-four EMTs and eight ambulances providing steady bay traffic, is another security issue on Cahoon’s plate. He oversees all EMTs and ambu- lances at CVPH and works closely with Operations Manager Mike Lagree to keep things running smoothly. EMT staff shifts overlap for better communication and continuity. Increased emphasis on active shooter scenarios poses unique safety problems for a health care facility. The stan- dard recommendation for institutions and public spaces is run, hide, fight. But the addition of a patient population and locked units make for special challenges that need constant evaluation by Cahoon and his team.

During the recent escaped prisoner scenario involving Clinton Correctional Facility in Dannemora Cahoon asked for and received solid support from senior leadership. “They said, ‘Get the people you need here and get it done,’” he explained. That same day a meeting took place with Captain Michael Branch and Lieutenant Scott Beebie of the City Police Department to put a plan in place should either the convicts or law enforcement officers sustain injuries and be brought to CVPH. “We took it from A to Z and planned how we would secure the hospital campus, ER, radiology and surgery and also how we would handle subsequent media coverage,” said Cahoon.

It takes extensive planning, foresight, communication, flexibility, and the support of senior manage- ment and a network of regional agencies working in tandem to maintain the level of preparedness necessary to successfully weather a crisis at CVPH. President and CEO Stephens Mundy com- mented, “Mike and his team are incredibly skilled and experienced and I’m glad to have them based here at CVPH and positioned as a resource for our local communities. I’m incredibly confi- dent in our preparedness level. We continually partner with outside agencies in real life situations and on many mock drills throughout the year to keep our teams’ skills sharp. We’re ready.”