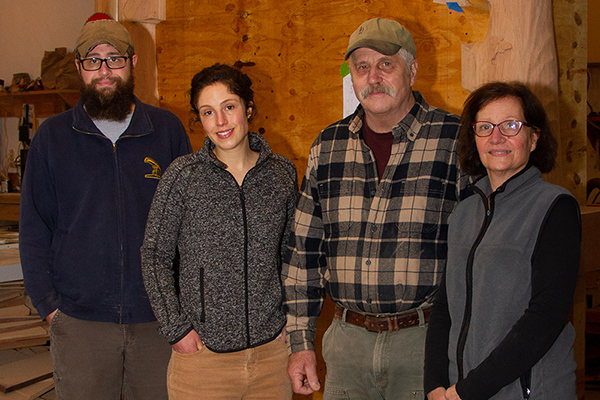 The Post family of Au Sable Forks is known from Lake Tahoe to Lake Winnipesaukee for their rustic one-of-a-kind furniture. Recognized for creating pieces fit for magnificent family camps, they are also famous for making pieces for prominent families like the Posts of Post Cereal (no relation to the AuSable Forks Posts). Most recently, the Posts were honored to have two of their pieces chosen for an upcoming Netflix series.

Larry and Joann Post, along with their children, Ryan and Jillian, own and operate L Post Rustics but it did not start out as your typical family business.

It all began when Larry suffered a Traumatic Brain Injury from a skiing accident at Whiteface in 2003. In the aftermath, he experienced short-term memory loss and was not able to return to his job at Georgia Pacific. With nothing else to do, he decided to return to his beloved hobby —woodworking. He found the repetition of the work helpful in his recovery and eventually started making guide boats with his son, Ryan. He then transitioned to making furniture after George Jacques, a rustic furniture maker in Keene Valley, asked him to do a few pieces. When Jacques retired, Larry ventured out on his own and started selling his furniture at a few galleries.

Before Larry’s accident, the four Posts had been on divergent career paths, but they have since come together to become one of the leading furniture makers in the region, complete with a new gallery store in Lake Placid.

After years as a frustrated artist, Joann Post quit her job as a registered nurse at the Champlain Valley Physicians Hospital in Plattsburgh to join her husband’s business inShe incorporated her oil painting experience to add artistic flairs to Larry’s pieces.

The Posts were nervous leading up to that first fair because they didn’t think they were good enough. It wasn’t until they saw the other vendors’ pieces that they realized they deserved a space at the fair. That year, and for eight out of ten shows they have attended, they won the People’s Choice award, boosting their confidence even more. The furniture show made a name for L Post Rustics leading to commissioned work.

Ryan joined his parents’ business in 2011 which helped modernize L Post Rustics. “I am the horse and buggy,” Larry said, “Ryan is the automobile.” By adding computers to the business to make realistic models that can be turned 360 degrees, they were able to create mockups for customers that prevented expensive and time-consuming mistakes.

As a talented cabinetmaker, Ryan also brought his own mid-century modern style to his father’s rustic twig and bark designs. Daughter Jillian joined the family business after studying Environmental Science and Botany at SUNY Plattsburgh and working for the National Park Service in Indiana. She had minored in art and was able to bring her woodcarving talents to the business to create realistic nature scenes. Like a Renaissance painter, she uses her collection of insect and plant specimens to inspire her true-to-nature carvings.

The Posts take pride in their work and do not use computers except to create models. They believe those who use computers to carve are cheating. “People are not looking for perfection,” Joann explained, “They want human touch.” The family is thankful that there is a local and a niche market for their artisan furniture and are excited to be featured on an upcoming Netflix show that was filmed at one of the great Adirondack camps in St. Regis.

“We thought it was a scam at first,” Joann explained. The email from the producer raised red flags because it requested to simply borrow the furniture. But once they realized the producer was legitimate, they were excited for the opportunity to market their product on a show with a national reach.

Although L Post Rustics is thrilled to be featured in the Netflix show, they are hoping to cut back on some of their commissioned work that require multiple meetings with architects and designers who all want a say in the final product. The commissioned pieces not only consume more time and energy in planning, but they also tend to be large in physical size. As Larry and Joann start to eye retirement, they are shying away from creating massive pieces that involve physically exhausting labor.

Instead, they want to focus more on creating pieces to be sold at their gallery store in Lake Placid. Prior to opening the store, customers visited their workshop on Route 9N in Au Sable Forks, but the constant interruptions were starting to impact their work. It was Joann’s idea to open the store to start the transition to retirement. The store is located on Route 86 in Lake Placid in a house converted to a commercial space. The house setting allows customers to immerse themselves and helps them get a feel for the furniture inside their own homes. The Posts also invited other local artisans to showcase their art at the gallery and the response was overwhelming. “We are the most underrepresented artist in our own store,” Larry added.

It is important to the Posts that everyone can afford something in their gallery store. “I would be so put off if I went to a gallery and couldn’t afford a single thing there,” Joann explained. That is why you can find affordable gifts from local artisans among the furniture. “Not everyone can afford a $4,000 oil painting, so we also offer prints for sale,” Joann noted.

Despite COVID-19, L Post Rustics’ business is booming thanks to online sales and social media. Like many other business owners the Posts have faced unexpected obstacles but thanks to tourism and the real estate boom in the region that has caused people to buy furniture for their new homes, they continue to be successful in their second year managing the gallery and are even in the process of purchasing the building.

In the coming weeks, the Posts are ready for the business to settle down so that they can focus on creating furniture for their gallery. The last few months have been overwhelming but the family appreciates any opportunity to tell the story of Adirondack wildlife. With the future unknown, not only because of COVID- 19 but also because of their upcoming Netflix appearance, they look forward to continuing to do what they love and making their mark in the rustic furniture world.