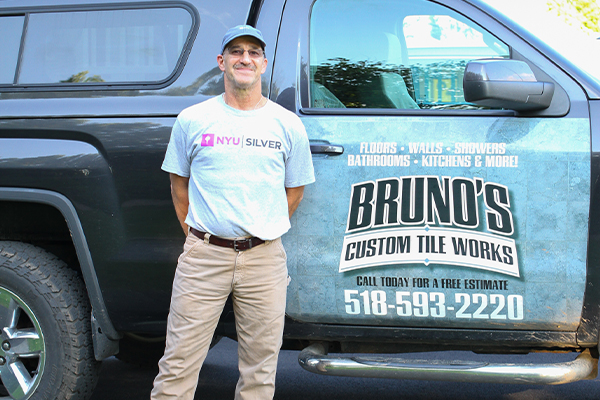 During the pandemic, many people took a look at their old bathrooms and kitchens and decided it was time for a change. When that happened it often meant a phone call to Kregg Bruno. Bruno opened Bruno’s Custom Tile Works 16 years ago during a rainy summer when his painting business was suffering. He was already tiling part time and made the decision to make his efforts full time. “It was a pretty good choice,” he reflected.

Bruno does electrical, plumbing and tiling work for bathroom and kitchen remodels including backsplashes, and also does an occasionally fireplace. Customers often show Kregg pictures of remodels they have found on Pinterest and he is more than willing to help them make the picture a reality.

Bruno is truly a one-man show, which is convenient considering how small most bathrooms are. He’s a busy man, starting a new job every 10 days, sometimes even every seven. He usually has six or seven contracts pending — the most he likes to handle at one time — but he never turns down a job as long as the client is willing to wait.

Word of mouth was originally how Bruno attracted new clients. Now he relies on Facebook along with client recommendations. A lifelong resident of Peru, he is currently a Town Councilman. In years past he coached wrestling at Peru Central School, but going to practice at three in the afternoon interfered with his business commitments. A true community man, he spoke glowingly of the small town he calls home and how supportive people have been, “If I do a job for a teacher, all of a sudden I have ten teachers calling me,” he said proudly.

One way Bruno’s Custom Tile Works stands out is how quickly he is able to complete jobs. Since he works nine-to- ten-hour days, he can often do a job almost a full week faster than other contractors. His work ethic is something he takes seriously — even working on Saturdays as long as it is not hunting season. Most people are still living in their homes while Bruno works his magic and therefore need the bathroom fixed as soon as possible. He is mindful of a family’s dynamics and does not mind putting in extra time to make sure the job is done as quickly as possible. He explained, “I can complete a bathroom remodel in 10 days tops.”

Making sure he has all the materials he needs before starting a job helps Bruno avoid delays. During the pandemic, there was a disruption in the supply chain, but he found that its primary impact was on plumbing equipment — especially tubs — since manufacturers experienced a worker shortage. When the materials for some of his pending jobs arrived all at once he had to prioritize which ones to do first. One family was expecting a child soon and was hoping to have the bathroom done before the baby was born. Thankfully his other clients were understanding and he was able to complete the job the day before they welcomed their baby into the world.

Since he relies on word of mouth for much of his business, Bruno carefully guards his reputation of being neat and clean and vacuuming before he leaves the job each day. Also, he does not start a job before 8 a.m. unless that is what the customer wants.

“Strong relationships are the key to having a successful business in the North Country,” Bruno noted. The relationships he has developed with his suppliers allow him to pass discounts he receives along to his clients. That’s one reason why he is rarely ever told his prices are too high. He will get the tile from wherever the customer desires including large chain stores like Home Depot or Lowes, but he likes working with Lee’s Appliance the best. He had only nice things to say about Valerie at Lee’s who helps his customers with color schemes. While Bruno, who views himself as “more of an installer than a decorator” finds Valarie’s service beneficial, he is also aided by his wife, Bonnie, who has a talent for design.

Like most small businesses in the North Country, Bruno relies on a few people to help him operate smoothly. He studied business in college, but finds the team at TD Bank is great for all his bookkeeping and banking needs. After years of painting for a living, he no longer accepts jobs that require it, but recommends a friend who offers the service.

Bruno identified his biggest issue during the pandemic as the rise in prices for lumber and sheetrock, while tile was mostly unaffected. With people spending more time at home and many having extra money due to the stimulus and cancelled travel plans, he had plenty of jobs to keep him busy.

Bruno’s customers often become like family. One client made dinner for him every night and others invite him to stop by for coffee once their job is finished. He even has a barter agreement with his former geometry teacher, exchanging services for fresh produce every year.

His strong relationship with his clients might be because he is an outgoing and friendly guy, or maybe it is because of the occasional surprise of Rulfs donuts for the whole family when he arrives in the morning. Perhaps it is because he does not charge extra for changes that happen along the way, as long as it do not take too long to fix. Whatever the reason, after 16 years, Kregg Bruno believes he is the lucky one because he gets to finish a job and see smiles on people’s faces.