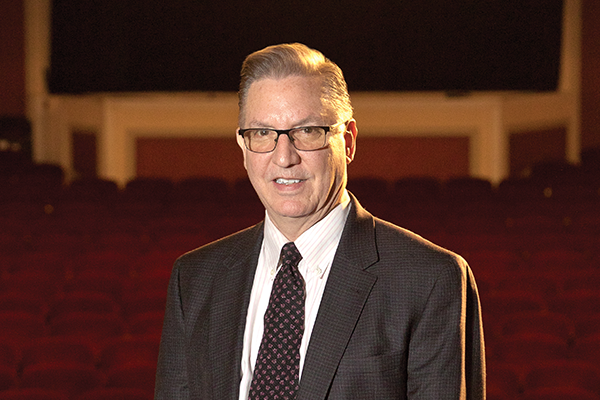 “I always wanted to run a theatre,” said Bob Garcia, Executive Director of the Strand Center for the Arts (SCA). “Spending 35 years working in New York City, I’ve had the privilege of working in the best entertainment venues with the most knowledgeable people who taught me the business. When I semi-retired in 2014, I was looking for an opportunity to develop and manage all aspects of a theatre — run a small business, so to speak. Therefore, when David Coryer of Coryer Staffing contacted me about an opportunity to run an intimate, historic theatre in an arts center in upstate New York, I was immediately interested.”

Theatre expresses a basic human instinct, brings people together, models democratic discourse, contributes to education and literacy, sparks economic revitalization, and influences how we think and feel about our own lives. The renovation of The Strand is an integral part of the revitalization of downtown Plattsburgh, and is a gem for the surrounding community.

When Garcia assumed leadership in August 2018, he was the SCA’s first permanent director since 2015. In spite of this being his first experience working in the non-profit world, and the daunting challenges of sustainability, solvency, visibility, and programming, he is understandably proud what has been accomplished as he approaches the end of his first year.

• Programming in the theatre has increased from 18 shows per year to approximately 70 shows this past year. In fact, Garcia’s first act as Executive Director was to bring in Dave Mason’s band Traffic for a nearly sold-out show in August 2018. This was only the beginning of a string of successful shows featuring a variety of entertainment.

• Revenues are beginning to support the theatre so it does not have to rely on the Arts Center.

• Changes in arts initiatives, especially in the Clay Studio (including Clay Studio Birthday parties) have been added.

• The SCA’s two exhibition spaces and off-site business locations are broadening and deepening the appreciation for the arts in our community. A rare exhibition, in partnership with SUNY Plattsburgh, of Polaroid photographs by Andy Warhol was enthusiastically received.

• Membership programs have been revamped. With over 350 individual and family memberships, there is a need to grow significantly. Updated benefits include higher event ticket discounts, free merchandise and more programming to choose from. There is also a new membership program for veterans. For Business and Patron Memberships, ticket discounts have been increased to 15-20%, and include free merchandise and more complimentary tickets. The program makes it possible for employers to offer a discounted membership to SCA in their employee benefit package.

• Restoration of the theatre is 92% complete and entering its final phase. This year’s plans include an enhanced concession center in the vestibule of the lobby, finishing the stairwells to the balcony, adding floor lighting in the aisles, and upgrading the sound and lighting systems. Next year, the old HVAC system will be removed from the second floor of the Arts Center to create new classrooms and a space for a recent donation of 3D printers.

• Restaurants in downtown Plattsburgh are feeling the ripple effect with increased business.

Born in St. Petersburg, Florida, Garcia attended Florida Atlantic University where he majored in Public Administration and had dreams of becoming a city manager. As an undergraduate, he fell in love with promoting concerts on college campuses, which opened the door to the entertainment business.

In 1981, a year out of college, Garcia took a job at Radio City Music Hall in New York City. The venue was later acquired by Madison Square Garden. As the company’s finance division lead, he provided fiscal oversight for live entertainment productions, including concerts performed by Frank Sinatra, Paul McCartney and Madonna. In addition, he was involved in producing Super Bowl halftime shows, Chicago’s Lollapalooza music festival, the Grammy Awards, and the Tony Awards.

When Garcia came to Plattsburgh, he brought all that experience with him. “I loved the idea of seeing what I could do — creating a new world, so to speak. Also, I love New York State. There’s a lot of value to staying close to the industry in New York City because of all the contacts I made over the years,” he said.

At the outset Garcia’s goals for the SCA were to create sustainability and solvency within a non-profit framework. His daily schedule consists of reviewing the fiscal health of the organization, monitoring ticket sales while adjusting marketing and promotion accordingly, scheduling programming, networking with current and former members (both individual and business), and attracting sponsorships. “I rely on my direct reports (Deputy Director, Gallery Director, Clay Studio Manager, Business Manager, two administrative assistants, and a Production Manager) to handle the day-to-day operations. They free me up to focus on memberships, marketing and programming.”

In order to increase visibility, Garcia has had banners placed on the fence at the Strand and installed on the fence across from Latitude 44 on U.S. Avenue in Plattsburgh’s south end. He has recruited the Boire Benner Group to retool the web site and manage social media marketing and is advertising in all the local print mediums. Garcia hopes to eventually erect banners in front of the theatre and install a marquee, but these must adhere to the strict guidelines imposed by the National Register of Historic Places.

A strategy Garcia has employed to increase cash flow and provide outstanding entertainment is to book tribute bands. For instance, patrons have rocked to Classic Stones Live (the Rolling Stones), Pink Talking Fish (Pink Floyd, the Talking Heads, Phish), the sold-out performance of Eaglemania, and the Led Zeppelin tribute band Kashmir. Slated for the coming months are The Man in Black (a Johnny Cash tribute), Bruce in the USA (a Bruce Springsteen experience) and Tusk – The Ultimate Fleetwood Mac Experience.

“These are the shows we survive on,” he explained. “They are low risk, easy to market and easy to sell. Patrons already love the music and enjoy hearing it live. I do the homework and only bring in bands with a sterling reputation and sound. Without tribute bands, we would not be able to present classical concerts, homegrown talent or other entertainment that may not produce as much revenue.”

In time, Garcia plans to expand programming to include more jazz and classical entertainment (the Duke Ellington Orchestra just performed to a nearly full house and the Lake Placid Sinfonietta will perform in July), live theatre, and eventually entice top-name acts who want to perform in an intimate, historic theatre. Garcia hopes to tap into the strong country music market more. Recently a Lorrie Morgan concert on a Tuesday evening attracted two-thirds of a sold-out house.

GETTING THE BUSINESS BUY-IN

Business memberships and sponsorships are crucial to sustain any non-profit theatre. “If we’re going to make this work,” explained Garcia, “we’re going to need more business memberships and event sponsorships. The Flynn in Burlington, for example, sustains itself that way, as do other non-profit theatres. This is the business model employed across the country.”

With five levels of memberships, ranging from $250-$25,000 per year, there is a price point for every business. Memberships include complimentary show tickets, inclusion in show presentations, programs, and the SCA web site, and, for some memberships, use of the Strand Theatre Mezzanine Meeting Room for a social event. All memberships are tax deductible.

“Our mission at the SCA is to engage, energize and enrich the community,” Garcia emphasized. “We strive to bring creativity, imagination and excitement as well as entertainment, arts classes and gallery exhibitions to everyone, which, to me, is most important. I love living here and look forward to the upcoming year.”