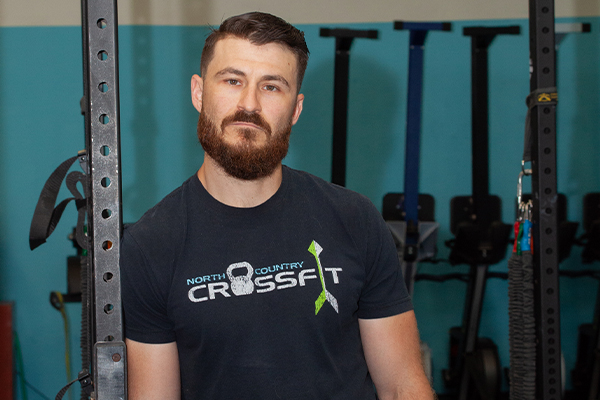 Ian Passino has always been passionate about sports and knew from an early age that passion would fuel his career. He just didn’t know where he would end up.

“I graduated from Johnson State College, now Northern Vermont University, with a health and exercise science degree,” he explained. “Initially, my goal was to be a physical therapist.” He interned at a PT practice in Vermont and found the work interesting, but the pace wasn’t a fit for him. “I found the work a bit slow,” he observed.

Passino had maintained a personal work out regime through sports, even playing basketball in college. And so, after graduation he took a job at the now defunct Wellness Center on the former Plattsburgh Air Force Base. “I was doing group and personal training there when a buddy asked if I had ever tried CrossFit?”

According to its website “CrossFit has been Forging Elite Fitness since 2001 and can be used to accomplish any goal, from improved health to better performance. The program works for everyone — people who have never worked out and those who have trained for years share equally in the benefits of CrossFit.”

Starting as a way for national and local service personnel (military, law enforcement, fire fighters etc.) CrossFit has evolved into a global network of over 14,000 gyms spanning over 155 countries. That growth can be attributed to their coaching staffs made up of athletes like Passino who are interested in fitness and education. “I went to a work out and was hooked. I knew it was the place where I wanted to grow.” And grow he has.

Inspired by his own experience, Passino doubled down on his passion and opened North Country CrossFit (NCCF), an affiliate of the international company, on Arizona Avenue in Plattsburgh a little over six years ago. Since that time, he has doubled the coaching staff and become the sole owner. “I am extremely grateful to Duane Bibeau (Passino’s former partner), but it was time to make the change and I love every day of the work!” Passino is as passionate about his pursuit as he is grateful for the coaching team he has assembled. “I don’t coach every class. A lot of NCCFs success can be attributed to our great staff. They are tremendous professionals and I couldn’t be happier with the team we have in place.”

Passino is fueled by the strengths of the CrossFit methodology and stands by the results, but they might not be measured in the way you think. “If you’re training to be a professional body builder, you’re probably not going to join a CrossFit gym. But most everyone else can find what they are looking for here.” NCCF attracts a broad range of athletes from teenagers to older people in their seventies. And yes, they are all athletes, but don’t get it twisted. At NCCF if you show up regularly and you are trying, you are an athlete. “One of the biggest challenges that I have — and not just me but a lot of affiliate owners – is the impression that you have to be fit in order to work out there. There is no bigger myth. People should be doing CrossFit to GET FIT!” As with any discipline there are the elites. These elite athletes participate in CrossFit Games and so their visibility is higher, but they are all working out at CrossFit gyms that are open to everyone and give them the opportunity to improve their health, no matter where they are starting.

As with anything, CrossFit is not for everyone. When asked about the CrossFit program Passino was candid. “Some say CrossFit is culty. I get that, but I don’t think it’s the right word. I don’t think a lot of people are really internally motivated to exercise with the frequency and intensity necessary for the results they seek. There has to be some buy in, some kind of motivation or incentive. With NCCF it’s the community. I’m proud of that! I think that’s great. If the reason people keep coming is because they enjoy their fellow athletes or the coaching along with their results that’s phenomenal!”

As a way to honor and respect the fallen, CrossFit has something called “Hero Workouts” meant to be both physically grueling and mentally challenging. They are named after a service member who died while serving their country or community honorably. CrossFit created this active memorial in 2005. Among the first of those honored was Navy Lt. Michael Murphy. The “Murph” is a challenge that NCCF members have been participating in since its inception. The work out or WOD (Work Out of the Day) includes running, push and pull ups and squats all the while wearing a weighted vest. In keeping with CrossFit protocol, athletes time their workouts and try to improve over their last time. The Murph Challenge is held every year on Memorial Day.

In addition to his formal education, Passino has a variety of industry certifications he and all of his instructors recertify for annually. He views that training as integral to the CrossFit methodology and business philosophy especially when people are looking to further their fitness resolutions beyond the first of the calendar year. “Our membership rates are higher than some other places because we value our members and we want them to come. Other facilities that might have more machines, or lower monthly fees aren’t invested in whether you attend our not. Our staff wants you to show up. There is a coach here who is going to lead you from the moment you warm up all the way through cool down. We’re here to help the people who want proper instruction because they’ve never done a particular movement before and to help them do it safely, training them how to progress, helping them get stronger in their everyday lives. That’s what NCCF is proud to facilitate.

When asked what he enjoys most about NCCF. Passino paused in reflection “If I had to pick just one thing it would be when all the athletes have participated in a challenge like ‘Murph’ and we are sitting around with our families and friends around the grill and just talking and enjoying life.”

HERO WORKOUTS
“MURPH” was one of the 1st Hero Workouts CrossFit posted. LT Michael P Murphy was the first service member to receive the Medal of Honor for Service in Afghanistan, during a Memorial Day event on Bagram Airfield, Afghanistan, May 24, 2015. LT Murphy was a Navy SEAL who was killed during Operation Red Wings. His story is told in the film Lone Survivor.

Today there are over 200 hundred CrossFit medal winners. The most recent addition, called Eva Strong, for Eva Mireles who died while shielding her fourth-grade students from a gunman at Robb Elementary school in Uvalde Texas. Eva was at her local CrossFit gym almost every day after school and earlier this year participated in the Cross Fit Open for the ninth time.