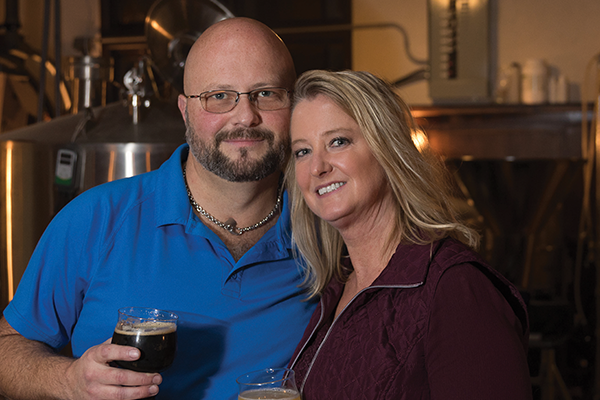 The corner of Peru and Broad Streets in Plattsburgh, New York has been an iconic spot for restaurants over the years. It was home to the popular Mexican restaurant, the Tijuana Jail, and some residents still use that as a reference when giving directions. Then came Geoffrey’s, another longstanding favorite serving pub fare. Next it was the short-lived home of Enzo’s and is now the site of the fledgling Lake City Brewing Company (LCB). Owners Carol Polhemus and Thomas Morley are in it for the long haul, and after just four short months, they are already feeling right at home on the corner.

Home brewing beer as a hobby has been growing in popularity for years. Polhemus and Morley started out as hobby brewers, ordering supplies from MoreBeer.com, an online home brewing supply store. But when their amateur brewing operation completely took over their two-car garage, with six to eight kegs running through three fermenters, the partners in life began considering becoming partners in a microbrewery. Friends encouraged the couple to take their brewing skills and recipes outside of the home and share them with the community. Polhemus, a CVPH Radiology Tech/ Empire State College graduate and a Patient Care Coordinator with Associated Healthcare and Morley, a SUNY Canton graduate in Electrical Engineering with 20 years in manufacturing engineering, began doing market research on the idea while holding on to their day jobs.

Their research took the couple to microbreweries and brewpubs south of Plattsburgh and in Vermont. They credit Jessy Jolicoeur, owner of Oval Craft Brewing, as a great resource. A sailing club acquaintance, Roland Sherman, who recently opened the Cape Vincent Brewing Company at the source of the St. Lawrence River was also key in helping the couple. Other key influencers include Michelle Kelley of The Pepper and James Snook, Branch Manager of Community Bank. “We were helped by a lot of people along the way,” said Morley. The couple realized the importance not just of having a vision and a model for the brewery, but having an actual nuts and bolts business plan. They spent a year kicking around ideas and concepts with Mark Dame from the North Country Small Business Development Center. Armed with a business plan and their desire to be close to other brewers, they began their search for a location. Like Goldilocks, they looked at properties that were not the right size or fit until they found the old Tijuana Jail/Geoffrey’s/Enzo’s location, which was “just right”. Except for one thing. A restaurant was not part of their business plan, but the building was great and everyone knows that beer and food go together so a full kitchen was worked into their plan.

Polhemus and Morley took possession of the building in March of 2018. Dozens of friends and family put in hundreds of hours of muscle, painting, cleaning and hauling to get the location ready for their July 2 opening date. Their business plan allows for Polhemus, Morley and Executive Chef Tyler Puchrik to each oversee a particular domain. Polhemus oversees the production of cider, and wine and liquor ordering. Morley focuses on creating great beer and coordinating guest taps and Puchrik focuses on the food and running the kitchen. Of course, there is overlap, but the division of labor has worked swimmingly to date.

Polhemus recently created a Harvest Crisp Cider which is turning into a seasonal best seller, the fall spice of the brewing world as it were. While Citrus Storm IPA, Pilsner and Kolsch were summer favorites, Morley finds he is now upping production on a Stout as the weather turns colder and patrons want a heartier beer. Puchrik does his best to work with local growers as close to farm to table as Plattsburgh can support: D & D Meats in West Chazy, NY for smoked brisket, pulled pork and ground beef, Pray’s for veggies, not to mention also supplies from Black River Meats, Meadow & Mountain Farms, Cabot, Northern Orchards, Oregano Flats, Glaziers, Uncle Jack’s Sugar Shack, and Juniper Hill.

STATE OF THE BREWER

In just a few short months, Polhemus, Morley and Puchrik have found their new normal. “The business plateaus and then we go from there,” explained Morley. “We want to stay fresh and innovative, it’s an evolution,” commented Polhemus. “Every month there will be something going on that is new.” At the time of this article, the couple had just completed training and were finalizing the addition of Quick Draw. They are in the process of obtaining their full liquor license and they have added an NFL sports package to their cable options.

Are there challenges? “It’s hard to scale up a ten-gallon recipe to two hundred gallons but it is evolving, getting pretty solid,” said Morley. “There definitely was a learning curve. With every batch, people see improvement. Occasionally they use a method that is called “free style,” brewing without a plan. Everything is computer controlled and it’s great to get customer feedback.” Clientele is diversified, and they like it that way. “Families, snowbirds, people from Vermont and Quebec, as well as people of mixed ages. Our prices are affordable so you can come in and not break the bank.” LCB is already hosting parties, wedding rehearsal dinners, a wine and beer pairing four course dinner for a meeting of realtors.

“We have been fortunate with our staff. It is like a small family,” said Polhemus.

“We want to be a craft beer nook, a destination,” said Morley. “With Oval Craft Brewing, Valcour Brewing Co., Plattsburgh Brewing Co. and AuSable Brewing and even Mountain Spirits and Murray’s Fool distillery we hope to be a destination driver. Oval Craft beers are on three of our taps so when people like them we tell them where they can find them. The North Country Chamber of Commerce is coming up with a craft map that will include all the breweries and distilleries.”

Morley adds that downtown businesses are working together as a team. “People are drawn to downtown and everyone has been very open, very helpful. The city is booming and it is great for us to be a part of that. We are providing jobs and making a difference in our employees lives and they are learning new skills.”

The building is perfect in that it will allow for expansion of production up to three times the capacity they are at now without ever moving to a new location. “The business is telling us what to do,” said Morley. The future includes more guest brewers, involving the community and tours of the brewing gallery. The couple recently had a flashback to the Tijuana Jail night, where they honored the founders of the original restaurant. They have plans to do the same with Geoffrey’s at some time in the future. “We are taking it back to its roots and moving forward.”