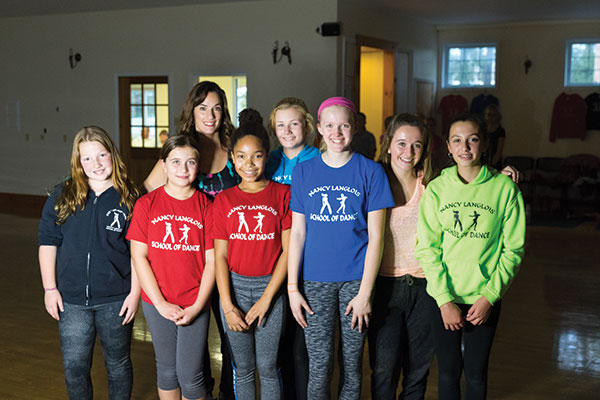 It’s fair to say that dance is in the DNA of the Langlois-Gerace-Mossey family. They’re good genes, too. Susan (Gerace) Mossey is the current owner and director of the Nancy Langlois School of Dance, which her mother, Nancy Langlois Gerace, founded. After decades in operation, the family business now operates two busy dance studios taught by three generations of Langlois-Gerace- Mossey women.

Known as “Miss Nancy” to her students, Nancy Langlois Gerace founded the dance school at the age of 15, and still teaches today. Mossey is certain that dance keeps her mother young. Driven by a love of dancing backed by a diploma from the Dance Educators of America in New York City, and training at the Arthur Murray School of Dance in Montreal, Langlois Gerace spent several decades teaching at her Elm Street Studio. “There are generations of people who know Miss Nancy,” says Gerace Mossey. “She’s literally taught thousands in the North Country.”

Miss Nancy and her long-time teaching assistant, Ruth Baker, teach all of the school’s preschool ballet and tumbling classes, and the 5 to 7-year- olds, predominantly in tap. Baker is herself is a 25-year student of the Nancy Langlois School of Dance. They teach nine classes per week— each an hour long—at the Sharron Avenue studio.

Mossey literally grew up in the dance studio, starting dance classes at the age of two, although some of her adult dance students have pointed out she was there well before. They remember taking classes from Nancy Langlois Gerace when she was pregnant with Susan. Mossey says she always knew she was going to follow in her mother’s fancy footwork. “This was not a side job or a hobby; this was our way of life.”

Mossey studied tap, ballet, jazz, and gymnastics growing up. After she graduated from high school, she attended Manhattan College, where she earned her bachelor’s degree with a double major in English and fine arts. Even though she knew she eventually wanted to teach at her mother’s dance studio, Mossey also wanted to experience dance at the professional level. She spent additional time in New York City studying at the Broadway Dance Center and the Bronx Dance Theatre.

In 1995, Mossey returned home to Plattsburgh to join her mother at the Nancy Langlois School of Dance, where started teaching preschool, tap, jazz, and gymnastics classes, and introduced the first hip-hop dance class. “When I came back, hip-hop classes did not exist in Plattsburgh, and it just caught on.”

This year, Mossey’s daughter, Kyra Mossey, “officially” joined the faculty as an instructor after eight years of training as a teaching assistant for both her mother and grandmother. Like her mom, Kyra Mossey began dancing at the age of two, and spent her childhood and teen years studying tap, hip-hop, ballet, jazz and gymnastics. Now a freshman at SUNY Plattsburgh, she schedules all of her college classes for the morn- ing hours so she can maintain a full-time teaching schedule at the studio during the after-school and evening hours.

Mossey says the tipping point for expansion has been when she’s had to turn people away. “I’d say that 90 percent of our business comes from word of mouth. We haven’t had to advertise much at all.” The dance school has just one 32-week term—from September to June, when schools are in session. Registration opens August 1 and classes generally fill by the end of September. “If we see there’s demand for a particular class, we’ll add it as the calls come in.” Students come from as far as Westport, Vermont, and Canada. They perform five recitals in June, and appear often in North Country parades and events, even dancing at halftime for the Harlem Globetrotters in Lake Placid.

For the school and for students, expansion has been a good thing, giving Mossey the flexibility to offer a wide variety of classes that can continually challenge dancers of all ages and levels. The instructional team can put dancers into the dance class that is most appropriate for their particular stage of development.

Preschoolers start at age three or four, usually with ballet, tap, and tum- bling; but Mossey points out she has a large number of adults, too. In fact, almost one-third of her students are adults. “We have over 50 students who have been taking classes with us for 10 to 20 years.” Recital programs even feature a “Decades of Dance” section, which lists students who have been studying with the school for more than 10 and 20 years. Part of the appeal for adult students is the availability of separate classes with dancers their own age.

While her teaching schedule includes four classes a day, six days a week, Mossey stays energized by her choreography work, which she does during the day—teaching the routines at night. “I love choreography,” she admits. “Hip-hop changes constantly, unlike tap, which has specific steps. Every year I’m able to introduce new music with new routines, and the students like the challenge.”

She also stays energized by keeping her summers sacred. Family time is important. “Unfortunately, because I work evenings during the school year, I miss a lot of my son’s games…so it’s nice to be home and cook dinner for my kids.” She also travels down to NYC with Kyra to take classes. “I love being a dancer once in a while too!”

“It’s fun to take that artistic break, because when September rolls around, everyone’s so excited to get back at it,” says Mossey. “There’s a lot of contagious energy when fall rolls around.” And with that type of energy, she sees no end in sight for the growth of the Nancy Langlois School of Dance.