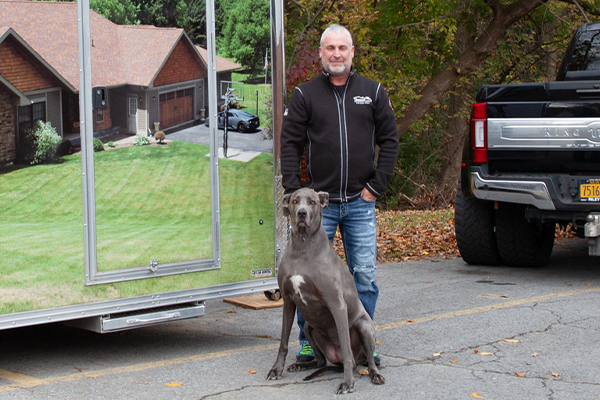 Construction work has evolved from the days of one crew doing everything to now when different work crews have specialized training and are hired by general contractors. This specialization can result in a higher quality finished product for consumers and a faster turnaround time of the job. Let me introduce you to one of the North Country’s specialized contractors.

When you walk into Thomas Construction’s office on South Junction Road in Plattsburgh you will be greeted by a chocolate Great Dane with the friendliest eyes, followed by Chris Thomas wearing a jacket sporting a logo of a dog on the sleeve. Thomas has had a dog with him since he started his business in 2003 and is known in the industry as the Roofer with a Dog. In my conversation with Thomas, it was clear he treats his business with a similar affection as he does to his canine friend. His focus on treating employees like family and being precise about every detail of a job were recurring themes in my discussion with him.

When Thomas started in business, he had a chocolate Lab named Tacoma who even went up on roofs with him — safely of course. He jokingly called Tundra, his current canine companion/company mascot his “best employee who never misses a day and is never late.” Listening to Thomas, it was clear he treats his human employees like family too. His philosophy for retaining good employees is to make sure they know they are appreciated. His two foremen have been with him for 17 and 12 years.

Chris Thomas was born and raised in Malone in Franklin County and lived in Peru for six years after graduating from high school. After his wife, Kitty, began a teaching position, he moved his family back to Malone where he resides now. His home, with its in-ground pool, waterfall, outdoor kitchen under a 40-foot gazebo made entirely from Oregon redwood with a wooden peg assembly, charcoal pig roast pit, outdoor shower, and bath house clearly demonstrate his ability and versatility.

After working for others in the construction business in the area from 1988 to the early 2000s, Thomas decided it was time to do the job his way. He asked the big names in local construction if, hypothetically, they would hire him for their projects. When they all said “Yes,” it confirmed he was making the right move. After “maxing out two credit cards” he started Thomas Construction in 2003 with just two employees — three counting his dog. Since then, the staff has grown to seven to ten workers depending on the season and services an area from Plattsburgh to Malone to Lake Placid. Their work is 50-50 commercial and residential projects. The job is not a 9 to 5 schedule according to Thomas, noting that his work phone is available all day.

Thomas described his industry as “feast or famine” as business picks up and then slows at different times of the year. Where other companies lay off employees during winter when construction projects slow across the board, Thomas Construction ensures its employees have work. He cites his philosophy of treating workers like family as his reason for the decision. To keep crews busy year-round, staff works on new homes in the winter. “When the frames go up, we’re right behind that crew, ready to put shingles on the roof,” he offered.

Thomas chose to specialize in roofing and siding since it is work that is always needed, but not everyone is willing to do. “It takes a unique person to do roofing,” Thomas said,” specifically a lack of a fear of heights.” Roofing work also requires much higher insurance rates than framing work. In New York State the median premium for roofing contractors is over $1,000 a month, $300 for general liability and $800 for Workers’ Compensation. That contrasts with premiums for a general contractor of around $300 a month. In a 2020 survey conducted by a nationwide contracting resource site found that both contractors at 13 percent and consumers at 20 percent considered roofing to be the most physically demanding construction job, followed by demolition at 11 percent and 15 percent. Furthermore, the Occupational Safety and Health Administration (OSHA) lists roofing as the third “most dangerous job” based on fatal injuries with a rate of 47 per 100,000 workers compared to 43.3 per 100,000 workers for general construction.

As for what separates his work from other construction companies in the area, Thomas said it’s doing “precision work for non-precision jobs.” He takes pride in his attention to the small details of roofing and siding work. He cites using 45-degree cuts on J channels or trims, which give projects a seamless look, as an example of the attention to detail his company gives jobs. He works alongside his team at every step to ensure quality control of projects. All cuts must be specific and all placements must be 100 percent accurate to create a smooth final finished project.

Thomas refers to himself as “very particular.” It is this level of involvement that helps the company stand out. Examples of the company’s work range from condos in Harborview Village in Plattsburgh to vacation camps in Lake Placid for presidents of major corporations.

The goal of Thomas Construction is that all of their finished projects show the attention to detail and quality expected by the property owner.

With the business’s 20-year anniversary coming up soon, Thomas wouldn’t want his business to be any bigger or any smaller. Its size is “perfect for the area,” he emphasized. “Any bigger and we would be maxed out for the area with not enough work to go around,” he concluded.