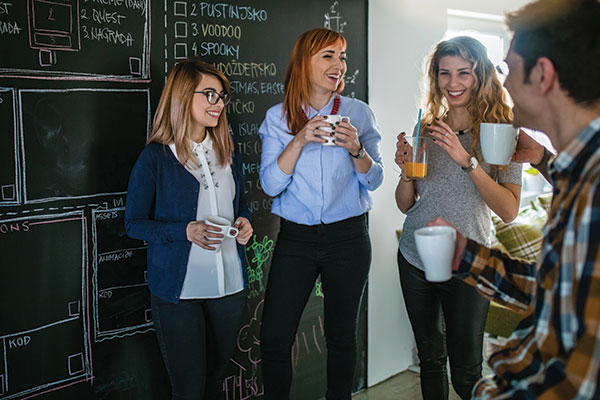 There are more and more business articles on Generation Y—the millennials. What has prompted so much Generational Theory in business? Every day in the United States, 10,000 millennials turn 21; by some estimates there are already 40 million millennials in the workforce. Over the next few years, they will be replacing the largest workforce our country has ever had—the Boomers—and there are enough of them to do so, unlike Generation X which is caught in between, literally and statistically.

I recently read a blog that stated, “Self-centeredness and entitlement are the biggest hindrances for twenty-somethings finding work. As workers, they’ve been described as ‘self-centered, needy, and entitled with unrealistic work expectations.’ Although money ranks low on the typical millennial’s priorities (so they say), a gratifying and flexible job is more important.”

A gratifying job? I personally think that desire transcends generations. Aren’t many of us Boomers in our second or third career because WE wanted a more gratifying job years ago? Granted, many of us are top- ping 20 and 30 years in the same position at that gratifying job. As we look at young careerists these days, though, the concept of ‘paying your dues’ beginning in a non-managerial position isn’t acceptable. They already have the view that they should begin in middle management and will have 7-10 different jobs in their working careers—each one climbing higher and higher. Yet, how are they going to get there?

Eighty percent of millennials who responded to a recent Forbes survey said they want regular feedback from their managers and 75 percent of them desire mentors. I think that is admirable. When we speak with staff members who aren’t satisfied or who feel frustrated
at work, regardless of generation, all are looking for regular feedback and guidance. This is an area in which supervisors and managers could definitely improve—regardless of the age of their staff members.

Another commentator noted in his blog that the seeking of feedback “is due in part to the almost instantaneous feedback the ‘Trophy Generation’ receives on social media, and an educational background steeped in group projects and teamwork.”

Why did he call this group of 20-somethings the “Trophy Generation”? Regardless of performance, every young person is used to being awarded a prize in competitions during their childhoods: Little League, skating club, soccer team, etc. So, it’s reasonable to expect that millennials coming into the workforce believe they deserve a prize—be it esteem, respect, money, a leadership role, etc.

A prize—haven’t many of us thought our regular paycheck and benefits were just that? Many acknowledge that both should reflect my performance, my loyalty, my personal work ethic. Yet, let’s take a look at many of our standard performance evaluation forms. Are we being compared to ourselves or to a “standard” against which all employees are held? If it is a “standard,” then my personal desire is to function “above standard” in my day-to-day role. Or is that just a boomer thing? When I speak with managers and supervisors, it seems that most staff members aren’t happy with a “meets standard” review—regardless of their generation. None of us want to be lumped with “the others.” Many desire the “above” or “exceeds” expectations review. But, is it possible that a work- place can have all overachievers? Wouldn’t that just lift the “standard” higher for all? After all, in business, we don’t all get a prize.

The same study reported in Forbes found that 79 percent of millennials think they should be allowed to wear jeans to work at least sometimes, and 93 percent say they want a job where they can “be themselves.” In contrast, only 60 percent of Boomers think they should occasionally be allowed to wear jeans. Why do 20-somethings think they should be allowed to wear whatever they want? Because that’s what they’ve been told all of their lives. This also appeared in MTV’s “No Collar Workers” study where millennials and Gen Xers were asked to draw a stick figure of themselves in work attire and in leisure attire. You may or may not be surprised to see the results. (www.mediapost.com/publications/article/170109/turning-on-the-no-collar-workforce.html)

Another business blog I follow had a contributor who wrote, “Hiring young people can add a breath of fresh air to a company. They have objectivity and energy. But their lack of experience and their impatience can often disrupt their productivity and that of others. It’s tough to understand in your 20s that some things just take time and that the biggest successes don’t usually happen impulsively. But if you are just out of college, a three- or four-year project feels like a lifetime and it’s hard to contain yourself. And I’ve noticed that the more talent a young employee has, the more impatient they seem to be.”

That impatience is reflected in the responses to the MTV survey above. Yet, let’s look at the undercurrents to many of their responses: communication and appreciation.

From my viewpoint, that is understandable. We see many staff members of organizations who come to us with “issues”—most of which could be ameliorated with quality communication of which appreciation is a part. After all, it is what most of us look for in those annual reviews. But it is the way in which newcomers to the workforce are requesting that reinforcement that is resulting in low employment numbers for Generation Y, and an over- all bad taste in the mouth of more experienced workers for this entitled Trophy Generation. Do you agree?

Bonnie Black is the Director for Employees Assistance Services, where she presents workshops and seminars to the more than 120 organizations which provide this benefit to their employees. In her role as an Intrinsic Coach her goal is to bring out the best in individuals and organizations.

Here are some other points listed in MTV’s “No Collar Workers” study:
• “Loving what I do” outranked salary and a big bonus.
• 89 percent agree “it’s important to be constantly learning at my job.”
• Half of millennials would “rather have no job than a job they hate.”
• 95 percent are “motivated to work harder when I know where my work is going.”
• 76 percent believe “my boss could learn a lot from me.”
• 65 percent say, “I should be mentoring older coworkers when it comes to tech and getting things done.”
• 66 percent of millennials agree that they want to invent their own position at their jobs.
• 60 percent of millennials agree that “if I can’t find a job I like, I will try and figure out a way to create my own job.”
• 83 percent of millennials are “looking for a job where my creativity is valued.”