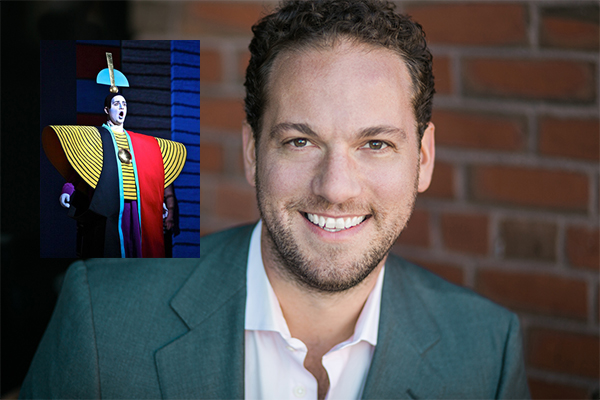 What do real estate brokering, woodworking, and opera singing have in common? Until you’ve read the story of Plattsburgh native Tom McNichols, the answer will remain a mystery.

McNichols’ powerful bass singing voice launched him from the auditorium of Plattsburgh High School to the Metropolitan Opera and Broadway at a young age. His impressive 20 year singing career spans stops in every U.S. state and five of the seven continents.

The advice of mentors led McNichols to pursue diverse parttime career options in addition to singing. Since childhood, he had enjoyed dabbling in general carpentry. While singing with CANTUS (an eight-member male vocal a cappella ensemble based in Minneapolis) he met an accomplished craftsman who taught him the finer points of woodworking and helped him kickstart his first custom woodwork business in the early 2000’s.

In 2008 McNichols made the semi-finals of the Metropolitan Opera National Council Auditions — one of 25 chosen from thousands of annual applicants. The honor propelled his career, leading to his relocation to New York City and signing with an agent. “With the cost of living so high in the city, I had to find a way to make a living beyond being a singer,” he recalled. “I looked into custom carpentry but insurance and other building requirements were way out of reach at that time.” A number of ideas later, real estate sales seemed to be the most flexible way for him to build something sustainable. He continues to be a licensed broker serving the greater New York City area, and will soon expand locally.

Juggling a trio of part-time careers proved to be the perfect recipe for McNichols, who brought his woodworking closer to home in 2016 when he opened The Wood Lab in Keeseville. After nearly thirteen years of self-employment in these three roles, and bouncing between New York City and Plattsburgh, he started to question the sustainability of his fractured career. Rather than making any bold move he chose to wait until a new choice became evident.

In March of 2020, the pandemic gave McNichols a very clear answer. When it forced closures, live performances disappeared overnight and his contracts were canceled. Real estate went into a pause, so he returned to the North Country full time. “I needed to find a place where my skills would make a more pronounced difference,” he explained.

When Strictly Business caught up with McNichols recently he shared more about his three career paths, what world-class performing has taught him and how he is now sharing his talents to support the arts in the North Country. Here are excerpts from our conversation.

SB: What important lessons did you learn early in your career?
TM: The importance of attention to details, and delivery with absolute excellence. All three of my careers are based on that. As an example, in every aspect of singing you are judged on how you take what is in the score and highlight the smallest details to make it great. The same applies to my work with custom kitchens. They look great because they are well-executed and functional, with clean lines and a comprehensive design.

SB: What habits do you have that contribute to your success?
TM: Curiosity, attention to details and a desire to always exceed expectations. That is first and foremost in everything that I do.

SB: What is keeping you busy in your role at the Strand currently?
TM: Everything. I care deeply about the arts in general, so I take my role there personally. I’m glad to have a growing team of skilled local professionals along with me as we persevere through the pandemic. I appreciate there is a lot of history with this organization. We are working overtime to come out of the pandemic more sustainable than ever before. We are in the middle of transforming the second floor of the arts center at 23 Brinkerhoff Street into a fully functioning makerspace, smart classroom and music education space for the community as well as finalizing details of the theater to better execute performances, all via the Downtown Revitalization Initiative grant received in 2017. I’m also hyper focused on the Shuttered Venues Operators Grant and similar federal and state programs.

SB: Who was your most influential mentor?
TM: I’ve been lucky and have had a lot of mentors but at the core, my biggest mentor is JoEllen Miano. She pulled me aside during the Ice Storm of 1998 and had a serious talk with me about my unique voice. Her work with me set a foundation and opened the doors to every other aspect of my training which in turn has led to my entire professional story.

SB: What was the best piece of advice you ever received?
TM: With JoEllen’s help, I studied under Norman Bailey and Kristine Ciesinski who taught me that the real reason for rehearsal is so that come performance time, your mind can be focused on the larger performance, not the small details. There will always be critics, so you have to learn to trust that you are working as hard as you can and don’t let the rejections bother you.

SB: What is your favorite quote and how does it speak to you in your life?
TM: My father always said, “Get good, then get fancy.” I’d like to think that I spent many years getting good, and only then did I get fancy. First you work hard on your own abilities and then go out and share them once you know that you are an expert.

If you would like a special treat,go to www.YouTube.com and type inTom McNichols name. You will find a selection of his performances.

SB: What advice would you offer to someone starting his or her career?
TM: Don’t doubt yourself just because you think something is not possible. There is an enormous world of opportunity out there if you are willing to take some risk and find experiences. Find something and dedicate yourself to it. Go above and beyond expectations, always. Take the chances, follow your dreams and eventually doors will open.

SB: Tell us about your approach to management and leadership.
TM: Collaboration. Real estate brokerage is collaboration on major aspects of one’s financial considerations, designing kitchens with people is collaboration on a most critical part of a home. In the music business, even solo artists are seldom actually solo, not to mention all the tech professionals backstage. The more people can work together, the better the end result.

SB: If you could have dinner and spend an evening with any wellknown person, living or dead, who would you choose and why?
TM: Mike Rowe* and Bobby McFerrin**. Mike so we can talk about all things from his time in operas, sales on QVC, voiceover work and, of course, his MikeRoweWorks initiatives that are actively closing the skilled trades deficit we have as a nation. Bobby is simply the greatest male vocalist that I have heard, largely because he has crossed so many genres. “Don’t Worry Be Happy.” was just the start of a wild career.

SB: What inspires you?
TM: Lately, it has been people’s creativity in the pandemic. Historically, other pandemics have led to major cultural shifts. For example, they say the Black Plague was largely responsible for the Renaissance, and the 1918 flu led to the Roaring 20’s. Right now, a lot of folks in my industry — and in the arts in general — are doing things that are super interesting and fun to watch. When you are forced to stay inside, creative minds are going to figure out how to create.

SB: What are you most proud of professionally?
TM: I managed to mold all three of my trades to form a collective whole. Only in the last few years have I had enough repeat or revisited work from my early professional days, that I’ve grown comfortable using the word “career” in relation to my performing. Many details such as casting decisions are well outside my control, so it took some time to come to that peace.

*Michael Rowe is an American television host, narrator and former opera singer. He is known for his work on the Discovery Channel series Dirty Jobs and the series Somebody’s Gotta Do It.
**Bobby McFerrin is an American folk-jazz vocalist who wrote one of the most beloved anthems to happiness of all time — “Don’t Worry Be Happy”