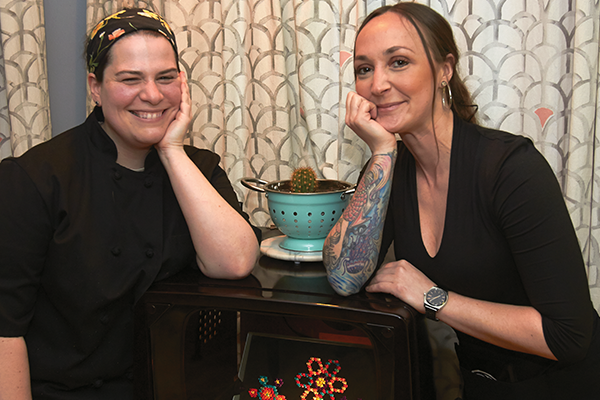 Walking into Lake Placid’s Salt of the Earth Bistro for the first time was like walking into a comfortable grandmother’s house but with a decidedly funky flare. Once seated at a table, the comfortable aura continued from the gracious greeting to a sense that we were the only customers in the place even though there were people at the other tables. Once we were given menus, we became even more intrigued. I had the urge to try every starter and both of the listed salads but reason prevailed and my husband and I had a thoroughly delicious dinner from starter through dessert. Since then, we have suggested the place to numerous people and dined there several times but I have never had the chance to discuss the restaurant with the two people behind it until this assignment.

Chef Andrea Lautenschuetz and Front of the House Manager, Liz Arnold, met working at Chair Six, just down the street on Sentinel Road. They quickly realized they worked well together. As Arnold put it, “We both know what we are good at and what we’re not good at.” Both had a common goal to create a very good restaurant with five-star food and service in an unpretentious atmosphere. When Charlie Levitz decided to close Chair Six and move on to private catering, the two began to work toward their dream.

Lautenschuetz’s in-laws owned the building behind the present restaurant, a purchase made with a Bed and Breakfast Inn in mind. She and her commercial pilot husband, Denis, talked them into creating a restaurant and so began nine month’s work turning what was once a hostel into a comfortable but upscale restaurant. The entire Lautenschuetz family pitched in to renovate the 1915 building but it didn’t hurt that Andrea’s father-in-law was a plumber and pipe-fitter. The only time a contractor was called was to install a supporting beam where a wall once stood.

Lautenschuetz’s unique taste harbors a sense of humor and funkiness that is found throughout the restaurant’s interior design. Her uncle’s ex-wife’s china set is glued to a wall, tea cups and all. Cactus planted in colanders grace the tables. An old stove from the house’s hostel days has become a wait station and the walls of an adjoining room hold a wonderful collection of family photos. Food graters serve as shades for hanging pendants in the front room across from the entrance where a clarinet has been turned into a lamp base.

Salt of the Earth opened in March 2017 and is now beginning its third year. They offer twelve tables inside and four outside on the porch and find themselves serving as many as fifty dinners a night during the busy summer season. On their home page, they announce what they want their restaurant to be and how they want their customers to feel.

Andrea Lautenschuetz grew up in Buffalo, went to Paul Smiths College after which she moved to Alaska where she worked in a resort. She returned to the North Country to work at the Lake Placid Lodge, went on to cook in a FEMA trailer when the Lodge burned down and guests in the cabins had to be fed. She then did a stint at the Interlaken where she ended up co-executive chef. Charlie Levitz wisely hired Andrea at Chair Six. Next, she moved on to create Salt of the Earth, part of a lifelong dream where she could finally mix the exotic flavors learned from her travels with the traditional comfort food of her upbringing.

Liz Arnold grew up in Peru and started working in restaurants at age 16. After studying the humanities at Clinton Community College, she realized she really enjoyed restaurant work so she earned a BA in restaurant/hotel management at SUNY Plattsburgh all the while working at various restaurants. (We met her originally at Anthony’s.)

The Salt of the Earth team is rounded out by Andrea’s husband, Dennis, who does whatever is needed, especially on the technical end. Grace Sullivan, the other server in the front, is Liz’s niece. She has worked with Andrea and Liz since she was 16 and will until she goes to law school in the fall. In the kitchen, Melody Hayes is learning the intricacies of working the line and is a master of detail, always making sure the mint on the plate is at the right angle.

In the front of the house, Liz is more than a waitress and greeter. She perceives her job as a labor of love, which in turn creates a special mood and ambience. In the dining room her presence seems to ensure that everyone is satisfied and enjoying themselves. Back in the kitchen, Andrea cooks everything from the appetizers to the desserts, everything except the bread, gelato and sorbet. She points out that people have memories of certain foods. “I want to play on that. While I have learned about several different cuisines, my parents are plain basic eaters. So I wanted them to try new things but food that was not scary, food that is accessible.”

On the curious side, there have been rabbit meatballs and bison with toasted walnut kibbeh, pomegranate molasses and ginger yogurt, Bhaji onion fritters with sweet, sour and spicy tamarind sauce, elk stew, and wild boar. But alongside those, the menu also lists a plain Jane hamburger and breaded veal cutlets with ham and creamed corn. Andrea said, “Liz likes everything and I am super critical but I love our brainstorming and the feedback about our food.”

While Liz relays stories about the food, Andrea is back in the kitchen cooking but also thinking about the next step and what they might improve. Pretty soon those thoughts will appear on a menu. They are two happy women with a great partnership.