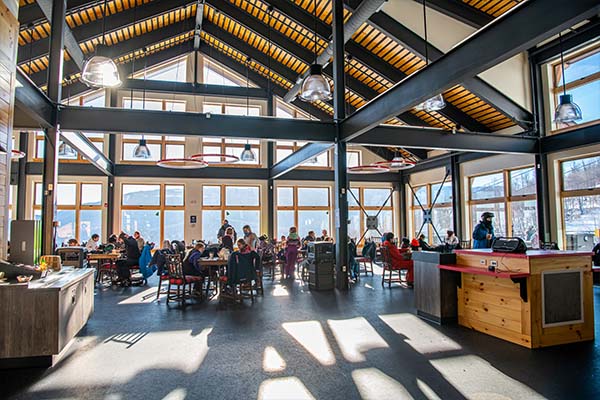 Based on its history as an Olympic venue, the greatest vertical drop east of the Rockies and its natural rockslide formations, Whiteface Mountain is known world-wide as a destination ski resort. It has the sixth greatest vertical of all ski areas as well as three peaks for visitors to enjoy. In addition, there are three main lodges, including the new Legacy Lodge built to replace the Midstation Lodge that was destroyed by fire in 2019.

Despite the shock and disbelief, the fire caused, Whiteface’s General Manager Aaron Kellett, found a silver lining. He viewed it as an opportunity to make necessary improvements. Planning to build the new facility — named the Legacy Lodge – began immediately so construction could commence as soon as the weather allowed. During the first construction season restrooms and a place to find grab-n-go items were completed. Last summer the building — including two kitchens for the restaurant and heated decks (which do not need to be shoveled) were finished. The Lodge was fully open in fall of 2021 and ready to welcome outdoor enthusiasts.

Kellett is proud of the design and appearance of the new lodge and gave a huge shout out to the crews who built it. “It was quite an accomplishment to build a lodge in the middle of a mountain during a pandemic when you couldn’t buy wood to build the deck behind your house,” he emphasized.

We invite you to view a photo history of the building of the Legacy Lodge.