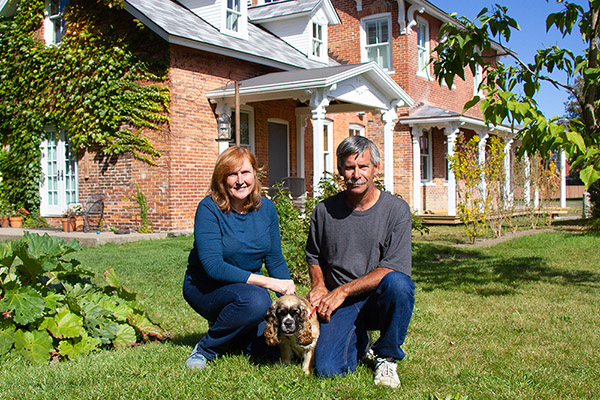 Variation on a theme usually refers to a piece of music but not in this case. The theme of this month’s issue of Strictly Business is entrepreneurs. In this article we introduce you to a couple who exemplify the characteristics of successful entrepreneurs: Passionate, goal oriented, self-motivated. While their efforts have not resulted in a new business, they have created a body of work that can only be described as amazing. Keep reading to learn what they have accomplished.

More than a decade ago I was stopped at the traffic light on the corner of Broad and Peru Streets in downtown Plattsburgh when the house on the northwest corner caught my eye. It was run down and appeared to be empty. A hitching post near the front door suggested the house was built in the 19th century when the city was ascendant. The light turned green and I drove away but I continued to check it out from time to time as I drove through town.

Somewhere around 2010 I noticed a man working on the exterior of the house. Progress was slow but steady. Years passed and, when I didn’t see him anymore, I assumed he was working inside. This spring, there he was again, working outside and the progress was amazing. That’s when my curiosity got the best of me. Who was that man and who has the patience to stick with a project for a decade? I reached out to a friend who provided a name and phone number. I called Steve Russo and his wife, Marianne Boudreau, and asked if I could talk with them. Here is their story.

Steve Russo grew up on Charlotte (now Peru) Street in what was then the Italian section of the city (from the Saranac River to the lake). Orsino’s produce market was just down the street. Most of the houses were large and so were the families. Steve and his six siblings fit right in. After high school he went to work for the city, first in the Building Inspector’s office and then at the Municipal Lighting Department (MLD).

Marianne Boudreau is a farm girl from Champlain, New York. After high school she attended BOCES in Plattsburgh, training to be a hairdresser, a profession she has embraced for 25 years. Steve and Marianne met on a blind date and have been married for 22 years. Never one to sit still for long, Marianne enjoys gardening, sewing, cycling and mountain biking in addition to her love of stained glass and furniture refinishing.

Ten years ago, when the corner house next door to Steve’s family home, went up for sale, the couple jumped at the opportunity. It was in need of a major upgrade but that didn’t deter them. Steve spent the next three years repairing the roof, shoring up the brick walls and replacing the windows. “Each of those things was essential in order to button up the house,” he explained. Most of the time he worked alone, a few hours each day after work and full days on weekends. Six years ago, he wrapped up his 25-year career at MLD and devoted himself to the house project full time.

He gutted the interior, replaced the old wiring, rebuilt stairways, and dug the floor in the basement down three feet to create a Great Room (carrying the dirt up the stairs in pails.)

The house, which was built in the mid-1800’s, has ten-foot ceilings on the first and second floors. The living room has views of both Peru and Broad Streets – one of the busiest intersections in the city. To minimize the traffic sounds, Steve designed and built fourpart interior shutters (a pair up and a pair down for every window). Then Marianne took over, designing and executing stained glass patterns for each one. In addition, she created the designs for the window above the front door and the glass panels on either side.

As the years passed Steve and Marianne stayed true to their plan — they would not move into the house until it was finished. Two years ago, they agreed they were close enough and the time had come. They made the move but the work continued, albeit at a slower pace.

When Marianne returned my call and invited me to visit, I wasn’t sure what to expect. As the couple walked me through the house and explained in detail what they had done, I was in awe.

The double living room is furnished in period reproductions and a blend of antiques Marianne has lovingly refinished. At the far end of the room is the original fireplace Steve restored, sourcing parts through antique dealers and specialty catalogs. The dining room’s coffered ceiling is an attractive design element as well as a practical solution for the house’s wires and pipes.

As you walk through the arch from the dining room into the large kitchen at the back of the house you move from the 19th to the 21st century. White cabinets, dark blue granite counter tops, stainless steel appliances, and a decorative tin ceiling. The top cabinets’ glass doors are trimmed in blue and silver stained glass with a small fleur-de-lis in the corner of each —a tribute to Marianne’s French heritage. Double doors take you from the kitchen to a small deck that looks out on multi-level gardens that were featured in the
Kent Delord Museum’s Secret Garden Tour a few years ago.

Access to the upper floors of the house is by front and back staircases. Two large bedrooms on the second floor, outfitted with four-poster beds and period furniture, have sunny, southern views. Also, on that level is an office tucked away behind the bedrooms and accessible only by a stairway from the kitchen. It is Steve’s domain where he repairs watches and keeps his collections of old cameras and small animal skulls. Marianne’s special place is her sewing room that looks out over the dormers.

Steve is currently giving the house’s exterior another face lift. For the past few months, he has been working on porches along its east and south sides. They aren’t your everyday porches but rather are made up of interesting angles and decorative columns Steve created to match the style of existing brackets on the house. As fall approached, he began adding landscaping that softens the look of the brick and adds an element of privacy.

Walking from room to room and floor to floor with the Russos I couldn’t help but be caught up in their enthusiasm. They have spent more than 10 years and countless hours reclaiming a house most people would have considered hopeless. In the process they have supported area businesses from lumber yards to home improvement centers, electrical and plumbing suppliers, paint stores, antique dealers, second hand shops, and more.

As we wrapped up our conversation, I asked Steve and Marianne if they were at the end of their decade long labor of love. They looked at each other and laughed. “No,” Steve said emphatically. “There will always be something more we want to do,” Marianne observed. A few days later I drove by the house. Steve was up on the porch roof. Still working. Ten years and counting.