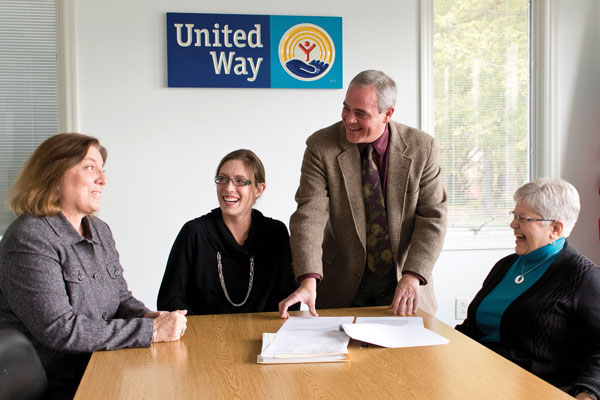 Hurricane Irene, in 2011, left the north Country with a renewed sense of what emergency preparedness menas. Her destruction hit communities, business and individuals with unimagined consequences and blew out of town leaving a gaping sense of vulnerability.

“In the wake of the disaster, Federal Emergency Management Agency (FEMA) contacted me to put together a long-term disaster recovery group of local non-profits, faith-based organizations and govern- ment entities,” explained John Bernardi, executive director/CEO of the United Way of the Adirondack Region, Inc. This group came together to assist with recovery needs that remained unmet after FEMA’s work was complete.

“Most people have a misperception that the federal government will take care of it all,” offered Bonnie Black, director of Employee Assistance Services at Behavioral Health Services North. “FEMA is there to get people and communities in a position to help themselves.”

Bernardi said, “We still had people without the basics: food, cloth- ing and shelter, after FEMA was finished. There were also additional home repairs needed and transportation problems to solve so people could get to work. Our newly formed disaster relief group discussed particular cases and mobilized the needed resources.”

The impact of Irene was felt by some immediately as their businesses or residences were severely damaged by wind and water, but the com- munity impact increased over time. Even businesses that were not directly hit by the storm suffered from an abrupt slowdown in the local economy while people tried to put their lives back together.

Another, perhaps less anticipated, component of recovery was the need for mental health services. “This was a traumatic event and people needed help coping in the aftermath. Mental health is a piece that we tend to overlook, but it is significant,” explained Bernardi. Depression and anxiety resulting from loss, sudden and unwanted life changes and future uncertainties can be crippling. For many peo- ple, counseling is necessary following a catastrophic event.

The long-term recovery group founded in the North Country by an impetus from FEMA recognized an on-going need to address disas- ter preparedness for the future. That same group of organizations allied to facilitate recovery in the aftermath of the storm shifted its mission and became Voluntary Organizations Active in Disaster of the Adirondack Region (VOAD-ADK).

VOAD is a national organization with over 100 chapters around the country. “VOADs provide a routine forum for communication among voluntary agencies to plan, exchange information and share lessons learned,” described Kristin Devoe, director of public information, Division of Homeland Security and Emergency Services. “Since our communities rely on these organizations, and New York State also provides assistance in times of need, it is very important that we support these groups and continue to be a part of the collaborative effort before, during and after a disaster strikes.”

In peace time, when there are no on-going recovery efforts, the VOAD-ADK meets periodically to work on preparedness issues like access to our limited mental health resources in the North Country, potential disasters that could result from the increase in oil trains moving through our area and promoting the need for individual, family and business emergency plans.

VOAD-ADK handles the community-level preparations, but the United Way also promotes disaster preparedness on a smaller scale. Just like every household, every business should have an emergency plan. “When crisis or disaster strikes, it can be overwhelming and extremely stressful. That is not the time to be developing a policy or protocol,” Bernardi stated, emphasizing the need to be prepared.

Most people spend a majority of their day in the workplace, and small business owners, often consider their employees like family. It makes sense, then, to put a plan in place to respond to an emergency.

Employees need to be trained on where to go and what to do if disaster strikes during their shift, and a contingency plan for resuming service to customers during recovery or rebuilding should be worked out.

When disaster strikes a business, it comes in two waves. The immedi- ate danger is loss of resources; assets, including human resources, can be damaged or disabled. Once the imme- diate danger has passed, a business can still be in jeopardy from an extended lapse in productivity.

There are certain types of disaster damage that can be reduced or elimi- nated with proper preparation. Being prepared and thinking through the contingencies in advance can also help get your business up and running more quickly following a disaster. The United Way has assembled resources to help businesses write a plan for emergency preparedness.

In the year and a half since VOAD-ADK was officially established, the group has continued to identify local resources and develop a plan to mobilize in time of disaster. Preparation is an on-going exer- cise, as VOAD-ADK tries to anticipate possible scenarios and uses past experience to develop a resource deployment plan.

“The VOAD-ADK is an excellent model for communities to follow. It is structured to be a collaborative working group with common goals, identifying resources within the community, making agencies prepared for every emergency situation,” stated Jane Gendron, executive director of the American Red Cross Northern New York Chapter.

As a founding member of the Board of Directors, Bernardi charac- terizes the region’s current level of preparedness. “I think we’re more prepared now than we ever have been because, as a region we’ve learned from the past, and we’ve responded to those learning opportunities.”